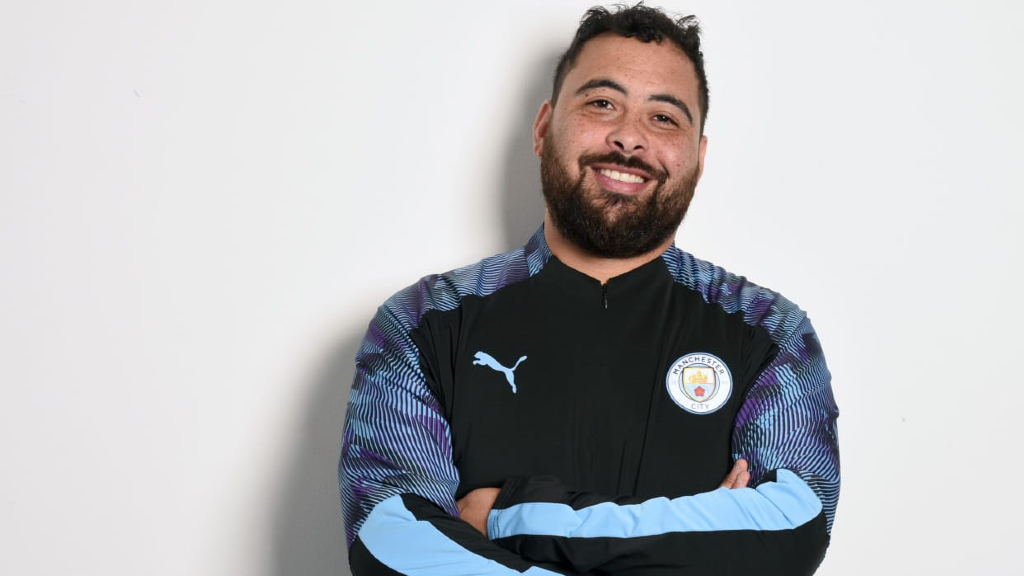 Martin Ingham-Griffith, born in England to Debra Ingham of Manchester and Simon Griffith of Barbados, has been privileged to join the likes of players such as Andy Cole, Peter Schmeichel, Owen Hargreaves and Carlos Tevez, who have represented Manchester United and Manchester City.

A football fanatic who has represented both Manchester United and Manchester City has opened up about being on the brink of death after initially contracting COVID-19.

Martin Ingham-Griffith, born in England to Debra Ingham of Manchester and Simon Griffith of Barbados, has been privileged to join the likes of players such as Andy Cole, Peter Schmeichel, Owen Hargreaves and Carlos Tevez, who have represented Manchester United and Manchester City.

He didn't quite make it onto the world-famous teams, but he has played invaluable coaching and development roles at both clubs - creating programmes which have changed lives in communities around the English clubs.

But Martin's entire life flashed before his eyes back in March when he was diagnosed with Covid-19.

“I had a headache and my body was aching a bit, but I didn’t think I had the virus at that point. I went to bed and woke up the next morning with my whole body aching, I couldn’t move, I couldn’t get out of bed, my head felt like it was going to explode.  I had a fever, I was going hot then cold, I was sweating then I was freezing, and I had to put the covers on, I was like, what is this?”

Ingham-Griffith said he immediately contacted his doctor who, after hearing his symptoms, sent a medical team to examine him. They deemed him mild at that stage and told him he should quarantine at home.

But within 24 hours, the symptoms had worsened and Ingham-Griffith was struggling to breathe. The paramedics rushed to his house to take him to the Manchester Infirmary where he stayed for four days.

After steady respiratory improvement, he returned home with antibiotics to continue his recovery.

Ingham-Griffith said the medication worked rapidly and he was almost back to his regular routine, communicating with friends, checking emails and even hosting a staff meeting on Microsoft Team on a Thursday night.

However, less than 24 hours later, things took a turn for the worse, when Ingham-Griffith contracted pneumonia.

“I couldn’t breathe when I woke up on Friday morning and by tea time I thought I was dying. My wife called the ambulance and they rushed me to the hospital, where they put me back on the ward and had me hooked to all those machines.

"The doctors told me, when I got better, that if the ambulance took half an hour longer, I probably wouldn’t have made it to the hospital alive”, said Ingham-Griffith.

At a point of hopelessness and despair, Ingham-Griffith said he conceded briefly to meeting his maker and wrote letters to all of his loved ones.

However, a change of attitude occurred overnight and resilience stepped in.

“The Sunday was really bad and I thought I was dying, but something happened overnight and my mindset changed completely.

Now recovered and full of life, the father-of-two and proud Bajan said he has even more appreciation for life, with definite plans of moving permanently to the island in the future.

His advice to those reading his story is to follow the motto of sports brand Nike and “just do it”.

Martin has truly lived out every young footballer’s dream to represent their boyhood club and rub shoulders with some of the greatest players in the world.

Ingham-Griffith entered the walls of Old Trafford as an enthusiastic, intelligent, passionate, University of Bolton Social Science student, who was there to complete a couple of hours for his course work. But those hours turned into five years of incredible memories.

These memories captured fantastic players and championship winning moments, but none were greater than the creation and execution of the programme, Volunteer 99.

Volunteer 99 is one of the most significant features of the Manchester United Football Club and it was formed out of a university project by Ingham-Griffith while on internship at the club and still working part-time at a cell phone company.

The programme is about coaching development and is aimed at young people who are interested in pursuing a profession in sports.

“It [the programme] was about taking young people or players who were interested in coaching and providing them with a coaching experience in an environment where you will gain qualifications and experience while being mentored at the same time”, Ingham-Griffith explained.

For the avid Manchester United fans, the number 99 is a noteworthy one as it was the year that United did the three-peat and earned the title of the best team in Europe; winning the English Premier League, English FA Cup and the UEFA Champions League.

These accomplishments were brilliantly intertwined into the programme by Ingham-Griffith, who said it was his greatest accomplishment to date.

“Project 99 is based around the treble season. So the idea is the coaches will have to do a total of 99 hours of volunteering and it was broken down into three stages of 33 hours, with each stage representing one of the trophies we won that season.

"It is like after 33 hours it was the FA Cup and you’ll get your kit and get to go to on your coaching course, for example.

There was a nice theme and branding behind it”.

Ingham-Griffith proudly stated that over 100 young people have passed through the programme, where approximately 30 of them went on to work full-time with United in various roles - some of who are still there.

Impressive work for someone still under the age of 30 at the time, and to do it at the club you loved from the time you existed. This seemed like the perfect love story for any football fanatic.

But not for Ingham-Griffith, who wanted a fresh challenge to test himself. As he stated, he wanted to see if he could shape social programmes and lives in a different environment, and his path took him to United rivals, Manchester City.

Within two-and-a-half years at the 'Cityzens', Ingham-Griffith has risen to the position of Community Engagement Manager, where he supervises the well-known Premier League-funded KICKS programme, the disability programme, the girls’ engagement programme and the school holiday football camps in a number of areas across Manchester.

Formed during the 1800s by the church to combat social issues which the city was facing at the time, Ingham-Griffith believes that many of the core values which led to Manchester City’s creation are still alive in the current setting.

“We are serious about social issues. We want to play great football and win trophies, but our actual identity and why we started was around helping the community and dealing with social issues, so that’s still at the forefront of the club and what we are still doing”, Ingham-Griffith proudly described.