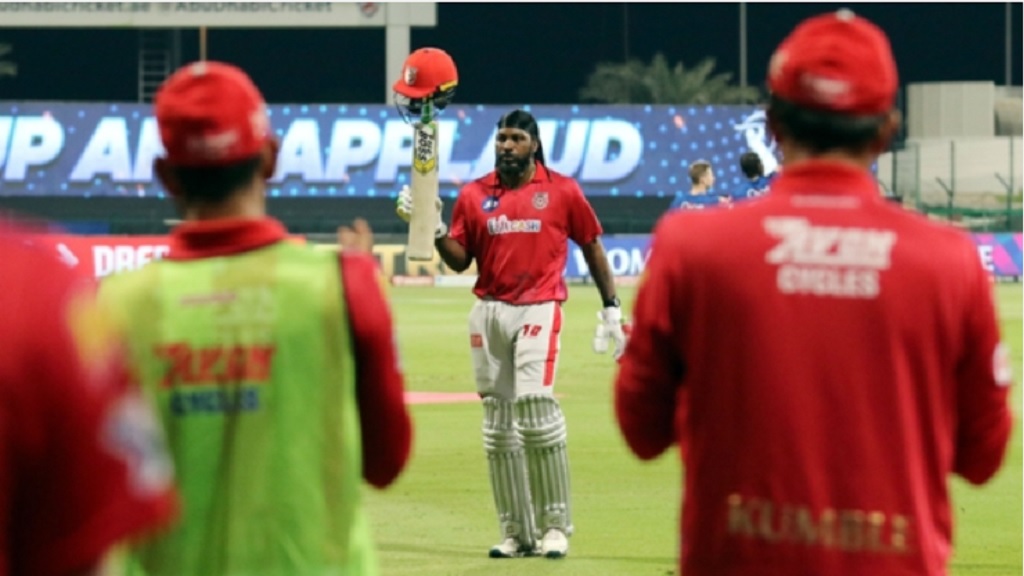 Chris Gayle walks off after being dismissed for 99.

The Jamaican surpassed 1,000 career maximums in Twenty20 cricket - the first player to reach that number - before being dismissed for 99, bowled by Jofra Archer (2-26).

However, the Royals overhauled that total with seven wickets in hand, moving them level with their fourth-placed opponents on 12 points as the round-robin stage draws towards a close.

Ben Stokes led the way in the chase with a 26-ball 50 at the top of the order, while Sanju Samson made 48, and Rajasthan skipper Steve Smith finished up unbeaten on 31.

Jos Buttler hurried his team to their target with two late sixes as he made 22 not out from 11 deliveries, the Royals clinching victory thanks to a Chris Jordan wide midway through the 18th over.

There was to be no 23rd T20 century for Gayle, though the 41-year-old still reached a notable milestone during his innings. He boosted his career sixes total with eight more on Friday, including one off Archer in the 20th over that took him to 1,001.

However, the bowler got his revenge with the next ball, aided by a deflection off bat and pad. Gayle threw his bat after falling just short, then shared a handshake with Archer before departing.

“Getting out on 99 is unfortunate, but I have been there and done that,” Gayle said. "It was a good ball. This happens. Still enjoying it out there. Having fun. Still have to be hitting it well at the age of 41. Got to give thanks for that. To those who wanted a century, I am sorry I missed out today, but in my mind it is a century.”

Having returned figures of 2-32 with the ball, Stokes gave Rajasthan's reply the early impetus it required. His half-century here followed on from an unbeaten 107 against Mumbai Indians last time out.

The England international appears to be coming into form at the perfect time for the Royals, though they still remain outside the top four in the table. They have one game remaining - against fellow play-off hopefuls Kolkata Knight Riders on Sunday - and the fight to qualify could well come down to net run-rate.