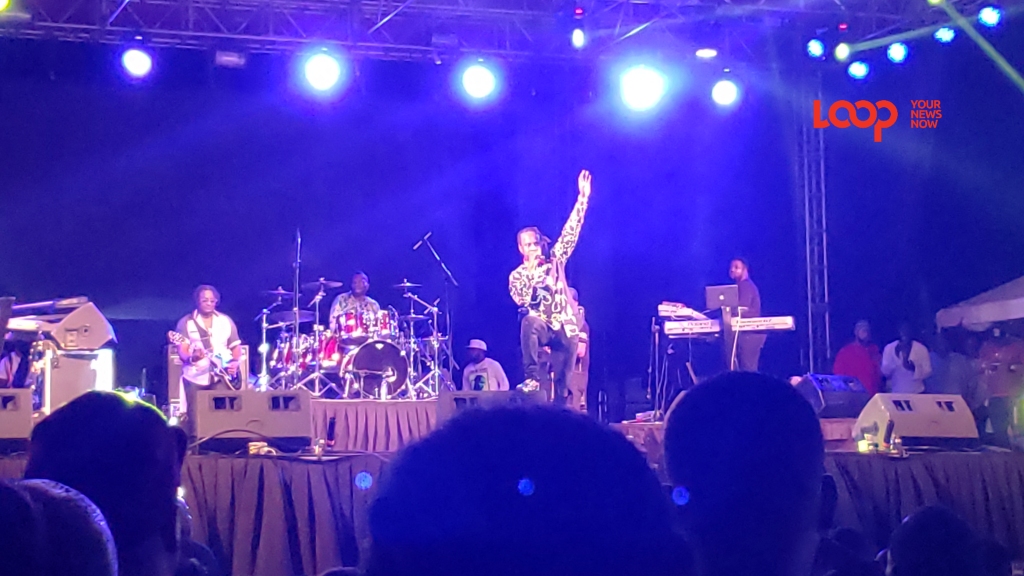 A mic drop and a stage upset left some fans at Hennessy Artistry 2018 aghast and waiting for more that never came.

It was reported that curtain-warmers 2 Mile Hill continue to show why Barbados' talent should never be underappreciated nor overlooked. They opened the big night, and apparently, Luciano blessed the stage. When Loop walked in Romain Virgo was announced and he did a slew of covers along with his collab with Christopher Martin 'Leave People Business Alone' before 'Fade Away'. It was then the night started to get so hot that the clouds burst and there was what weather people call an isolated shower blessing the venue.

Virgo may not have kept the crowd's interest from start to finish but when he hit the lyric 'Dirty heart cyan sweep wid broom' he caught the ear and attention of many who may have been by-passing his performance on their way to the fully-stocked Hennessy bars, especially in VIP.

Then contrary to the tradition over the past few years, the international R&B act was slotted into the middle of  the performance sheet. Enters Trey Songz.

And like a 'Heart Attack', sudden and unexpected were the loud screams from overzealous fanatic ladies when he hit the stage in a black long-sleeved sweater and a pair of white short jeans. Trigga, as he is also known, dipped into his musical repertoire and had patrons singing along to 'Think I invented sex', 'Dive In', 'Say Aah' and more.

Trey Songz hit the stage at Kensington Oval around 1:18 am, and as he sang rendition after rendition with a few breaks where his electric guitarist got to show-off his skills, he kept shouting out Barbados.

But it was around 1:57 am as he sang 'Bottoms up' and removed his sweater to put his tatts and abs on full display that some fans took their cheers up a notch. It was as though for that particular moment they were mentally singing 'Can't help but wait'.

Shabba Ranks was announced to the stage at 2:30 am and after about three minutes of the band playing intros on loop, he hit the stage in all black - black button-down, black vest, black tie, black slacks and even a black fedora. Amazingly it seemed that this act was big on some patrons' cards though he has not dropped any new releases recently, but from their yells, it was obvious that the 'Mr Loverman' had not lost it. He even gave the old dub fans his track 'Twice my age'.

At 3:15 am, when Shabba told the crowd "World of girls...time fi free up" and took off his vest and placed it on the speakerbox, within seconds he was called off stage. Then a stagehand came out quickly and picked up the dropped mic from the center of the stage and the host said 'Thank you'.

Patrons were left looking at each other like 'What just happened?' However, the Fas7Star organisers did not waste a minute to secure the crowd's attention once more with a huge announcement that next April Buju Banton will be in concert in Barbados.

This picked up the spirits of even the persons who the intermittent showers had dampened and the show went on as they say in show business.

Last to hit the stage but by no means the least, with his biggest current track entitled 'Silence' it was nothing near silent when Andrae Sutherland aka Popcaan ran out... Kick outtttttt!

'Clean' best describes how the Jamaica dancehall artiste stepped out and with a live band backing him for the first time at a Hennessy Artistry he was in his element. This was not the Poppy that touched down in Barbados some eight years ago. He has grown leaps and bounds in terms of his ability to perform and it showed.

But though revved up to put down what may have been his best performance on this island's shores yet, after appearing at almost 3:30 am, at 4:02 am Popcaan told the crowd that the police said he can do one more track.

'Unruly' not only by name, the artiste said, "one, two or more", and with that, he quickly belted out 'Love yuh bad', 'Silence' and 'Bullet Proof [Nuh carry feelings]'. Running around the stage with his infectious hype, he sang, 'Inviolable' - "Dem can't tie down me... Unruly we nah fail tell dem we no fade."

And with that, he kept up a good front but left the stage most upset.