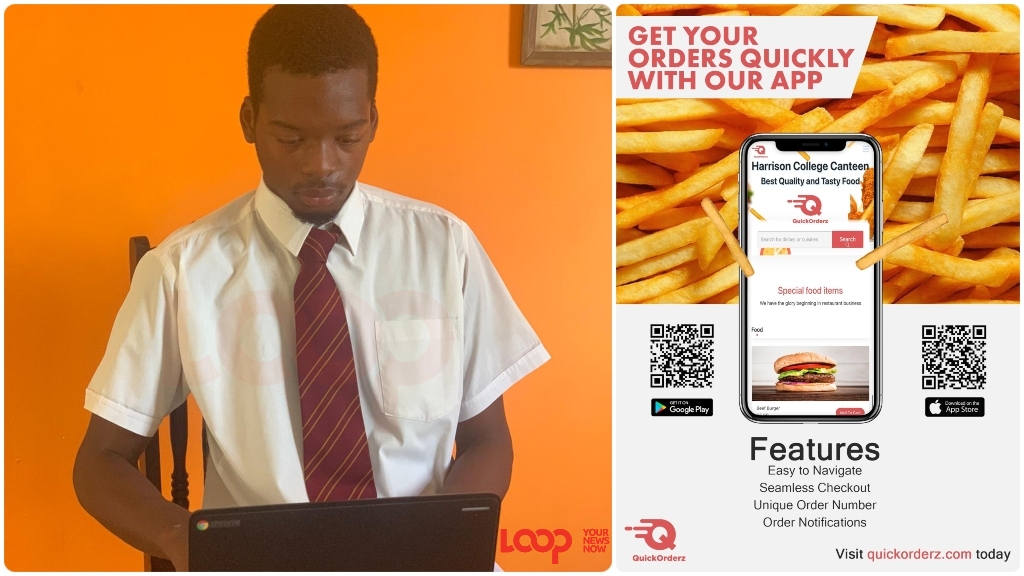 Jason Stephney is the brains behind the QUICKORDERZ app

Jason Stephney saw a problem at his Harrison College school canteen - long lines, and had one thought - 'This needs to be fixed!'

He began competing in Fourth Form in the Silver Technetium-sponsored business innovation competition held at his school and won it last year, but that's not the end of Jason's story. After that, he set out to make the business idea a reality.

Execution after one comes up with the idea and plods through the business plan is usually the hardest step. It is where most entrepreneurs toss in the towel, but not Jason.

Silver Technetium Inc may have just asked students 'What innovative ideas do you have to improve your school?' and called on them to create and pitch a business plan that was properly researched, but on winning, that was not enough for Jason. He won a phone and $1,000 and put the money straight back into the development of his winning app - QUICKORDERZ.

True to their words, the organisers of the competition, who said that his idea is one that they would invest in, they put their money where their mouths are and Jason got to work securing a database or source and server space. Having done a STEM programme Coding Camp at the University of the West Indies (UWI) when he was younger and studying IT, he had an idea of what he wanted, so he paid some developers with more app creating and web design experience to bring his concept to life. Just as he handed out surveys and questionnaires to make sure that his solution to the long canteen lines was a good idea, he did not just pick the first app builders on Fiver, he researched the guys too and checked out apps that they had built previously. Jason enjoyed working and being guided by Silver Technetium Inc owner Arvind Gopwani and he said that Sheldon was a huge help throughout this process too

Step one is completely getting the app up and going. It will be tested at the pilot school, his alma mater Harrison College for a month or two. The only holdup currently is the technician needs to install Wi-fi at the canteen. Though the school has Wi-fi the canteen is without this service. Step two will be rolling out QUICKORDERZ at other schools before Step three rolling it out at all schools across the island and at some businesses where the foodservice takes a similar format to a school canteen.

Though not officially published yet, some students have already downloaded the app which is both available on the Play Store and from the Apple Store.

Children are quick to take up the tech so once a student has a school email address they can reap the benefits of QUICKORDERZ. And with the advent of COVID-19, they all do have student emails now so it is easy for students to order. All orders must be in by 9am. The canteen then can process the orders with enough notice to avoid a rush and pilling up during the two new lunch hours since school reopened.

Some people may take the Wi-fi hiccup as a setback, but Jason took it in stride and he used this time to help with the onboarding process for the canteen workers. With a smile, he said that teaching them was not too difficult as the canteen has "some tech-savvy staff". He said he is teaching them the backend and "it's not perfect but it's progressing." 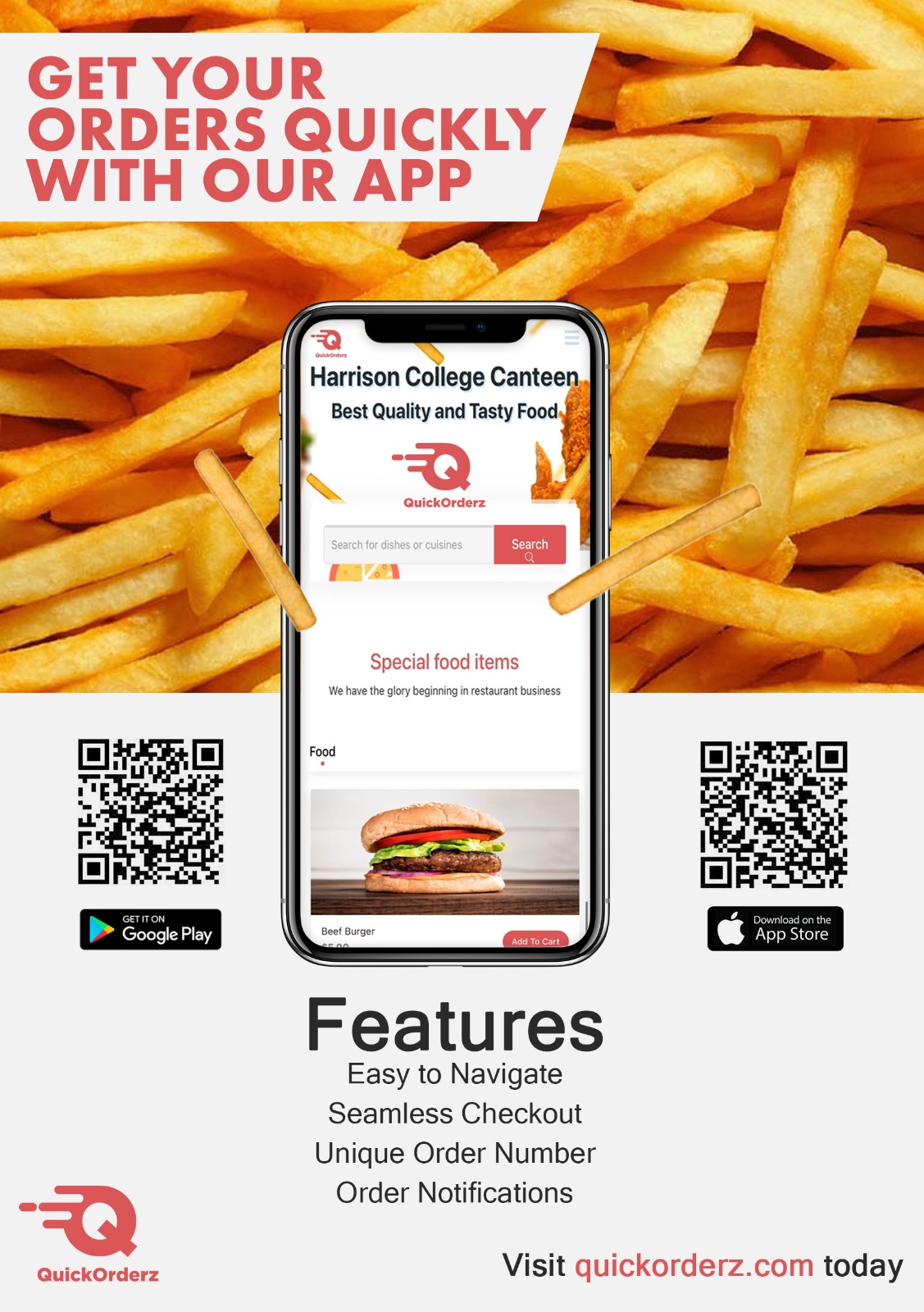 Students do not have to worry about the school rule which says that cellphones are not to be used on the compound during school hours, because with QUICKORDERZ students can submit their orders the night before from at home or while in the car or on the bus on their way to school. It is that easy and simple. The app gives them a number and their emails are known. They say their name and number at the canteen and their orders will be processed in a jiffy.

Speaking to checks and balances in the system, Jason said that making students use their school emails was one such strategy because this removes the possibility of someone pranking the canteen with a large order. Every order as it is set up now carries all the details about that student's account.

Jason's hope is to move to a credit system where students could put "Let's say $100 on their account at the start of the term and with each purchase, the amount would be deducted". Beyond that, he hopes that one-day people could even pay online with credit cards, Mastercard Debit or Visa Debit cards.

Chatting with his proud mother Irene Stephney, she said "He worked very hard!" Looking at her son's accomplishment, in winning the competition, she said that she was pleased, but it was the dedication that he showed after winning, the fact that he chose to keep working to make his business come to life, that truly impressed her. She told Loop: "When he won it would have been easy for him to stop there." She would not have been surprised by that but it was his determination to reinvest the prize money and continue that wowed her even more. She said that she is a stickler for pushing the mantra "See it through to the end", to not give in when things get a little difficult and she saw her son do just that - persevere.

She said in the competition stage there was the page limit, word limit and specific requirements, and despite having his usual workload, she was "very happy" that he stuck it out. She said at many moments it would have been so easy for him to say 'This is too much work' but he did not. She said at the presentation stage when he had to present before the organisers, the professionals, he practiced a lot.

Once he won, "he went to business meetings on his own with his people," she said. She said she was never once in doubt of his capabilities. She said, "with them, he held his own. I have every confidence in him and I believe he can handle himself. I never mollycoddled him."

So after everything, with the QUICKORDERZ app set to launch officially at the flagship school of Harrison College, Irene said that she is "very impressed and happy that he saw it through and his determination has paid off".

Harrisonian achieves success in the midst of a global pandemic