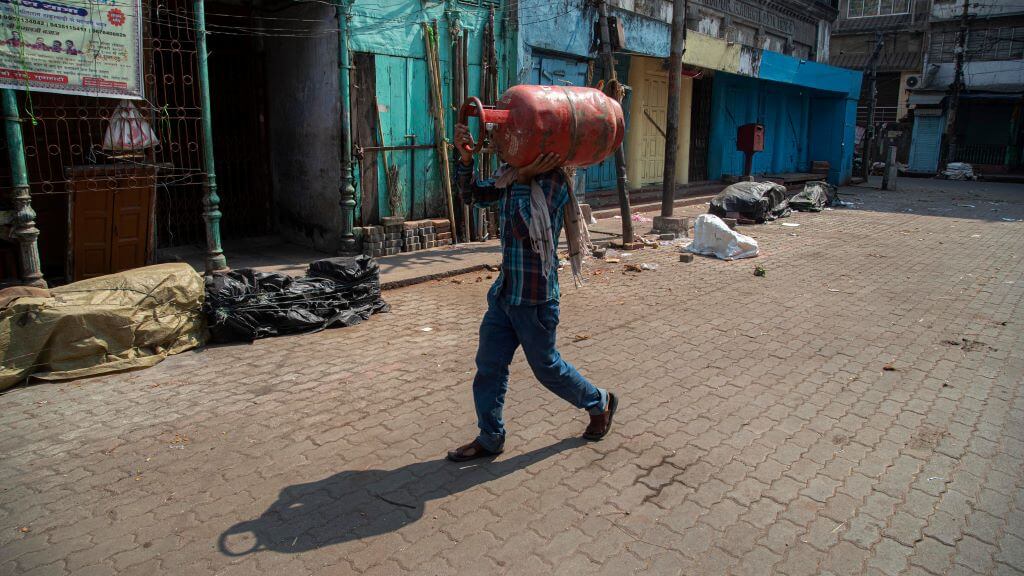 Some of India's legions of poor and people suddenly thrown out of work by a nationwide stay-at-home order have begun receiving aid distribution.

Both the public and private sector are working to blunt the impact of efforts to curb the novel coronavirus pandemic. The distribution commenced today (March 26).

India's finance ministry announced a 1.7 trillion (USD $22 billion) economic stimulus package that will include delivering monthly grains and lentil rations to an astonishing 800 million people, some 60 per cent of people in the world's second-most populous country.

In the meantime, the police in one state were giving rations of rice to shanty-dwellers, while another state's government deposited cash into the bank accounts of newly unemployed workers. Aid groups, meanwhile, worked to greatly expand the number of meals they can hand out.

The unprecedented order keeping India's 1.3 billion people at home for all but essential trips to places like supermarkets or pharmacies is meant to keep virus cases from surging above the 553 already recorded and overwhelming an already strained health care system.

Yet the measures that went into effect Wednesday — the largest of their kind in the world — risk heaping further hardship on the quarter of the population who live below the poverty line and the 1.8 million who are homeless.

Rickshaw drivers, itinerant produce peddlers, maids, day labourers and other informal workers form the backbone of the Indian economy, comprising around 85 per cent of all employment, according to official data. Many of them buy food with the money they make each day and have no savings to fall back on.

Untold numbers of them are now out of work and many families have been left struggling to eat.

“Our first concern is food, not the virus,” said Suresh Kumar, 60, a bicycle rickshaw rider in New Delhi.

He said he has a family of six who rely on his daily earnings of just 300 rupees (USD $4),

In the northeastern state of Assam, police started handing out rice in some of the poorest districts, an informal effort they said they hope to ramp up in coming days.

In India's most populous state, Uttar Pradesh, the government already sent 1,000 rupees ($13) to 2 million informal workers who are registered in a government database and have bank accounts. It was handing out free food rations to those who are not registered, though some in the state capital, Lucknow, said they weren't aware of such handouts.

In New Delhi, authorities teamed up with local charities and aid groups to map out locations where the city's poor tend to congregate, distributing 500 hot meals cooked in government schools, political party headquarters and shelter kitchens.

Details of the programs, from how well-funded they were to how many people they hoped to help, remained scant, however.

“These are extraordinary times and proving food to the poor is a mammoth task,” said Vinay K Stephen, who runs a nonprofit group working with the government to feed the capital’s homeless. “But we will do it.”

Economists had urged the government to create a stimulus package to blunt the effects of the lockdown on the poor, many of whom migrated to big cities for work and now find themselves unable to earn a living or go home to their villages after Indian Railways suspended all passenger service or the first time in its 150 years of operating.

The $22 billion packages announced Thursday, which includes distributing five kilos (11 pounds) of grains and one kilo (2.2 pounds) of lentil beans every month from government stocks to 800 million people, is in addition to an earlier pledged of $2 billion to bolster the health care system.

It hasn't been only the poor caught out by the lockdown. Even those with money to spend in shops have met with long lines and confusing regulations.

In the city of Bangalore, people crowded roadside vendors outside a closed wholesale vegetable market. Others stood in line outside grocery stores behind chalked markings to maintain social distance.

People ignored India's new social isolation norms to keep at least one meter (3.2 feet) apart and crammed in to buy food at one store in Lucknow during the state government's limited allowed window for shopping.

“I know it is risky and (one can) get infected," said Kamlesh Saxena, a government employee shopping at the store. “But I have no choice.”