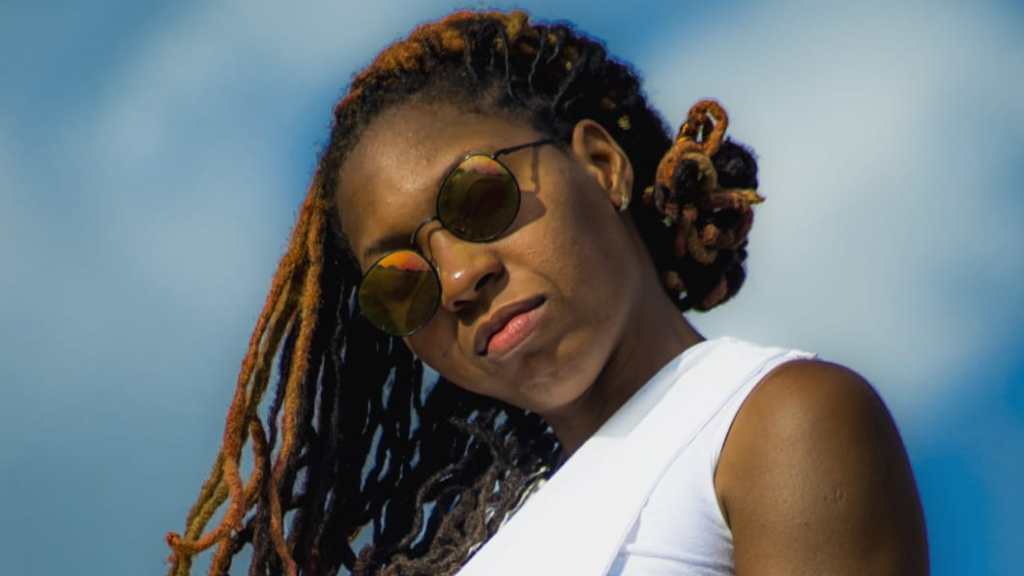 "How do I define myself as an artiste? Different. Somebody that's pushing for better."

These are the words of Barbadian rapper and chef extraordinaire, Lexi who is charting a path for herself across the landscape of music as well as in the culinary arts.

Lexi has these fields and hills on her mind

Having two passions, Lexi has been determined not to sacrifice one for the other. From her Pizza Squared Home Gourmet business as well as holding down her recording and performance work, she continues to juggle both sides of her creative lives.

"How do I juggle art and being a chef? I have no idea. The majority of last year I had to take a break from being a chef because I got carpal tunnel in both hands and it really affected everything and it made me see my value and see myself as a brand and what I can really bring on that forefront. But in terms of juggling it, I'm not sure how because for a long time in my life cooking held the driver seat, but now music is in the driver seat and cooking is in the passenger seat."

Lexi was a proponent of the Honey Jam stage where some got their first glimpse of her talents as a rapper in Barbados. She has been pushing to redefine how people view her as well as the industry ever since.

With a hard to pin down style, the best ways to describe what Lexi creates musically is an earthy and carefully crafted portrait of life through Hip Hop. She feels very much like a throwback to the neo-soul and Soulquarians of the 90s out of America but with her roots firmly planted in present-day Bajan soil.

The struggle of the creative artist in Barbados is one that many artists, including Lexi, try not to push to the forefront. Many of the more progressive new acts have tried to unburden themselves from this struggle by being a part of what millennial culture labels the "gig economy".

"For rap artists in Barbados there are usually a few ways to make it but still there has been a lot of great stuff through the cracks. But there seems to be a lack of infrastructure available, so as an artist and a businesswoman I want to change all that."

Lexi believes that a new collective movement around the arts is necessary but how we get there may take some time.

"We can improve it by having more conversations. This year definitely I am doing a lot of collaborations because I kind of stayed in my box. And I still feel like an underdog and an outcast in our industry. I think we definitely need to have more conversations and not look at each other as competition in an unhealthy way but look at each other like I can learn a lot from you and vice versa."

As for her inspirations, she sees Lauryn Hill, Nina Simone, Tupac, Kendrick Lamar, J Cole, Missy Elliott, Erykah Badu, Sade, and Jay Z as her large scale influences. Of course, Lexi is inspired by the Bajan born Rihanna, as she appreciates her impact and growth as well as the amazing journey she has had as an artiste and a Bajan.

In terms of other local talents, Lexi had a few people she has been inspired by.

"Mahalia, because watching them grow from Nexcyx and seeing at this point where Mahalia's Corner is as a cornerstone in our industry that we need to build is amazing. Teff because I think he's another artist I have seen grow and has been consistent in breaking down barriers, making moves and connections, and doing bigger things... a good friend of mine also Mad Mixy I have watched him grow as well as Ch'an, and  Izzy Isabella Burnham."

Last year Lexi worked hard in creating her show '88 Oasis' and it helped many in the artistic community have a space for themselves where traditionally many felt there was none. She hopes to continue pushing events like this as she goes forward and doesn't want it to only be seen as a vanity project.

"Yes, it was me creating a space for myself but not just for myself but for other artists like me who don't feel like we have a space to showcase our music and originality 100 percent here."

Lexi says she wants to see Barbados' artists get far more and reach their potential and she hopes to be a part of that revolution as it takes root in the coming years.

"I would like to change the idea of the music industry in Barbados. And when I say change I just want to build and add to all the great things that people have been doing in the industry. Not only to let our voices be heard but to be funded and something is done about it. It's a new world so I want to create a path for artists to be able to get their music out but also for people to start coming for our music.  I want to inspire, help and definitely build a bridge from here to where we want to go and really be a huge part of that change and touch and inspire people with my music."