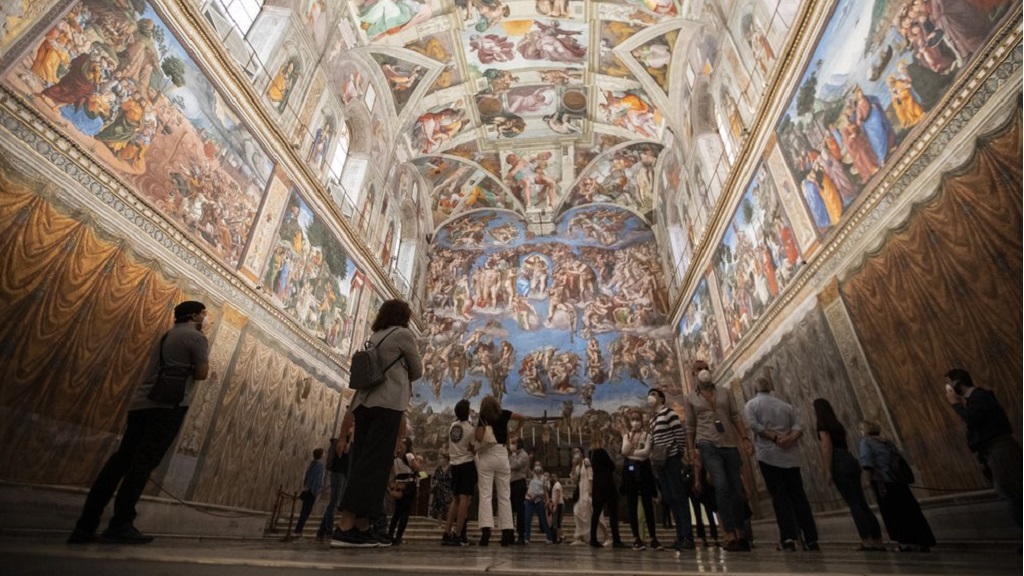 The first day of June saw coronavirus restrictions ease from Asia to Europe on Monday, even as US protests against police brutality sparked fears of new outbreaks.

The Colosseum opened its ancient doors in Rome, ferries restarted in Bangladesh, golfers played in Greece, students returned in Britain and Dutch bars and restaurants were free to welcome hungry, thirsty patrons.

Countries around the Mediterranean Sea began tentatively to kick off a summer season in which tourists could bask in their famously sunny beaches while still being protected by social distancing measures from a virus that is marching relentlessly around the world.

"We are reopening a symbol. A symbol of Rome, a symbol for Italy," said Alfonsina Russo, director of the Colosseum's archaeological park. "(We are) restarting in a positive way, with a different pace, with a more sustainable tourism, compatible with our cities."

Greece lifted lockdown measures Monday for hotels, campsites, open-air cinemas, golf courses and public swimming pools, while beaches and museums reopened in Turkey and bars, restaurants, cinemas and museums came back to life in the Netherlands.

A long line of masked visitors snaked outside the Vatican Museums, which include the Sistine Chapel, as they reopened for the first time in three months. Italy is eager to reboot its tourism industry, which accounts for 13% of its economy.

The Vatican Museums' famous keyholder — the "clavigero" who holds the keys to all the galleries on a big ring on his wrist — opened the gate in a sign both symbolic and literal that the Museums were back in business.

Still, strict crowd control measures were in place at both the Vatican and the Colosseum: visitors needed reservations to visit the landmarks, their temperatures were taken before entering and wearing a mask was mandatory.

The Dutch relaxation of coronavirus rules took place on a major public holiday with the sun blazing, raising immediate fears of overcrowding in popular beach resorts like Scheveningen, near The Hague. The new rules let bars and restaurants serve up to 30 people inside if they keep social distancing, but there's no standing at bars and reservations are necessary.

Britain, which with over 38,500 dead has the world's second-worst death toll behind the United States, eased restrictions despite warnings from health officials that the risk of spreading COVID-19 was still too great.

Some elementary classes reopened in England and people could now have limited contact with family and friends, but only outdoors and with social distancing.

In Asia, Bangladesh restarted bus, train, ferry and flight services Monday, hoping that a gradual reopening revives an economy in which millions have become jobless. Traffic jams and crowds of commuters clogged Manila, as the Philippine capital embraced a high-stakes gamble to kickstart the economy.

Around 6.18 million infections have been reported worldwide, with over 372,000 people dying, according to a tally by Johns Hopkins University. The true death toll is believed to be significantly higher, since many victims died without ever being tested.

In the US, the often-violent protests over the death of George Floyd, a black man pinned at the neck by a white Minneapolis police officer, are raising fears of new virus outbreaks in a country that has more confirmed infections and deaths than any other.

Protests over Floyd's death have shaken the US from New York to Los Angeles. Demonstrators are packed cheek by jowl, many without masks, many chanting, shouting or singing.

The virus is dispersed by microscopic droplets in the air when people cough, sneeze, talk or sing.

"There's no question that when you put hundreds or thousands of people together in close proximity when we have got this virus all over the streets ... it's not healthy," Maryland Gov. Larry Hogan said.

The US has seen more than 1.7 million infections and over 104,000 deaths in the pandemic, which has disproportionately affected racial minorities in a nation that does not have universal health care.

South Korea and India offered cautionary tales Monday about just how hard it is to halt the virus.

South Korea reported a steady rise in cases around the capital after getting praise earlier from around the world for appearing to bring its outbreak under control.

Hundreds of infections have been linked to nightspots, restaurants and a massive e-commerce warehouse near Seoul, the capital. The 35 new cases reported Monday include 30 around Seoul, and the resurgence is straining the country's ability to test patients and trace their contacts.

"We have been seeing an increased number of high-risk patients who have been infected through family members or religious gatherings," said Jeong Eun-kyeong, director of the Korea Centers for Disease Control and Prevention.

"There's a particular need for people over 65, pregnant women and those with chronic medical conditions to be alert."

Incheon, a port city west of Seoul, on Monday said it's considering banning gatherings at 4,200 churches and other religious facilities.

In India, cases increased rapidly even as it eased restrictions Monday on shops and public transport in more states. Subways and schools remain closed and experts said India is still far from reaching the peak of its outbreak.

The government was easing the lockdown to help millions of day labourers who have lost their jobs and are unable to feed their families.

China, where the global pandemic is believed to have originated late last year, reported 16 new cases on Monday, all travellers from abroad.

With local transmissions having fallen to virtually zero, much of China has reopened for business and Monday saw the further restart of classes in middle and high schools. Kindergartners and fourth- and fifth-graders will be allowed back next week.

The US has sent Brazil more than 2 million doses of a malaria drug touted by President Donald Trump as a potential treatment for coronavirus, despite a scientific study that shows it can actually harm patients. Brazil is Latin America's hardest-hit nation in the pandemic, with nearly 515,000 confirmed cases, second only to the US

Japan, meanwhile, started blood tests Monday in three areas including Tokyo to check to what percentage of its people have developed antibodies, a sign of past coronavirus infections. The tests will be conducted on 10,000 randomly selected people over 20 years old and results are expected at the end of the month.