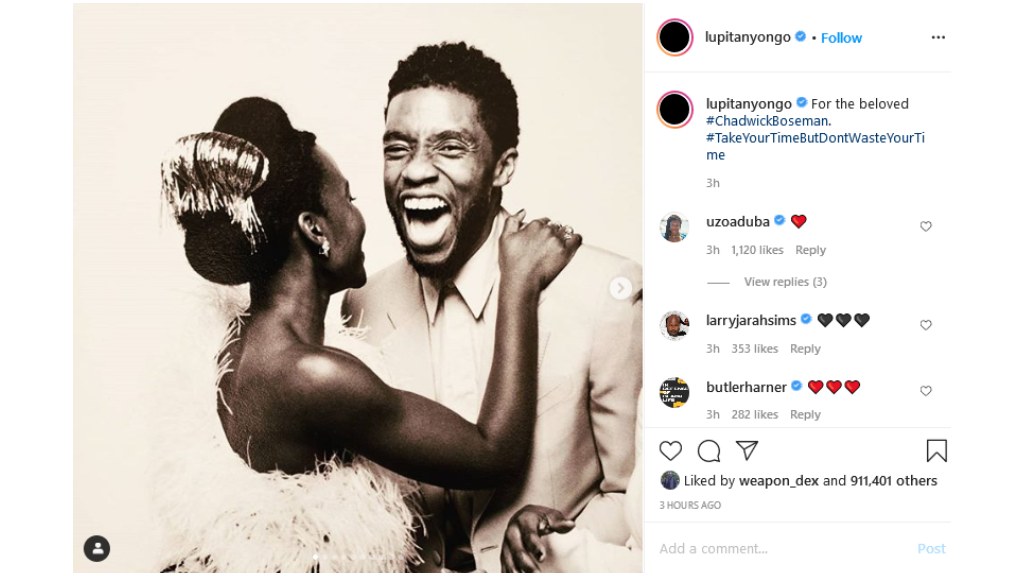 Tributes continue to come in from many across the globe for the late Chadwick Boseman.

The most recent being a heartwarming tribute from Boseman's Black Panther costar Lupita Nyong'o.

The 37-year-old actress took to Instagram and shared a photo of the late actor laughing as Lupita put her hands on his shoulders with a message saying she was struggling to think about him 'in the past tense'.

"I write these words from a place of hopelessness, to honor a man who had great hope. I am struggling to think and speak about my friend, Chadwick Boseman, in the past tense. It doesn't make sense. The news of his passing is a punch to my gut every morning," Lupita said.

Chadwick Boseman's death came after an unpublicized battle with cancer and it took many by surprise.

Nyong'o continued to praise Boseman in her post and said he always had the right energy.

"I am aware that we are all mortal, but you come across some people in life that possess a immortal energy, that seem like they have existed before, that are exactly where they are supposed to always be - here! ... that seem ageless.... Chadwick was one of those people," Lupita said.

Nyong'o played alongside Boseman's King T'Challa's as his love interest Nakia in the Marvel film, "Black Panther," and while she says she didn't know her co-star long, he will stay with her always.

She went on to say: "Chadwick was a man who made the most of his time, and somehow also managed to take his time. I didn't know him for long, but he had a profound effect on me in the time that I did. When we came together to make Black Panther, I remember being struck by his quiet, powerful presence. He had no airs about him, but there was a higher frequency that he seemed to operate from. You got the sense that he was fully present and also somehow fully aware of things in the distant future. As a result, I noticed that Chadwick never seemed rushed! He commanded his time with ease."

Many of Boseman's Black Panther costars including Nyong'o, attended a private memorial for Boseman organized by his wife Taylor Simone Ledward to pay tribute to the actor who died after a four-year-long battle with colon cancer. He died on August 28 at 43 years old.

Chadwick Boseman to be honoured in hometown where he inspired others

Michael B Jordan on Chadwick Boseman's death: I wish we had more time