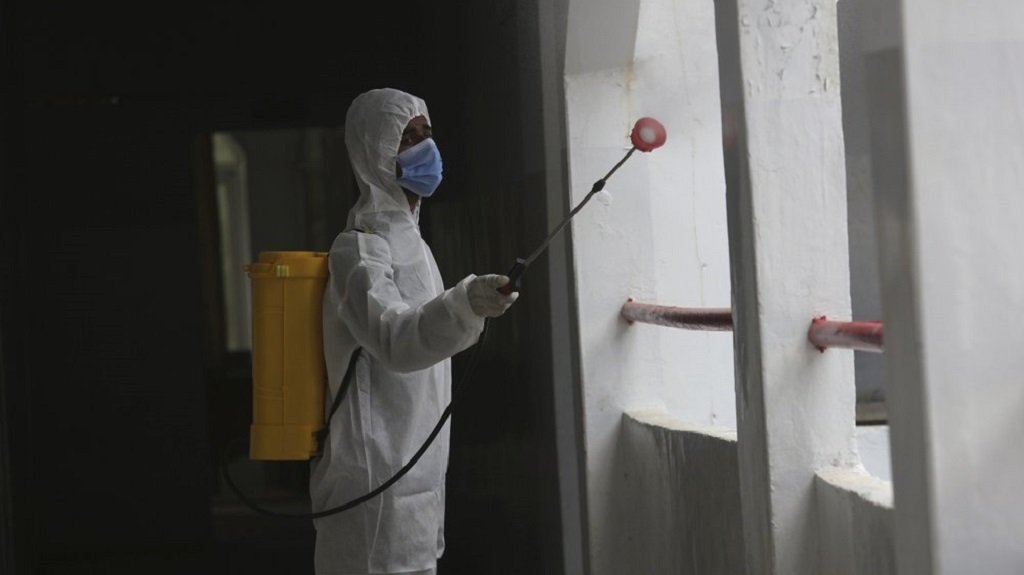 A worker sprays disinfectant in a school as preparations for reopening of educational institutions that were closed in March are finalized, in Karachi, Pakistan, Monday, Sept. 14, 2020. Education officials in Pakistan say authorities will start reopening educational institutions from Sept. 15 amid a steady decline in coronavirus deaths and infections. (AP Photo/Fareed Khan)

A global development agency said the world's 20 major industrialized nations have seen their economies shrink in an unprecedented manner between April and June amid the COVID-19 pandemic.

The Paris-based Organization for Economic Cooperation and Development said Monday that the gross domestic product dropped by a record 6.9 per cent in the second quarter of this year in the G-20 area.

This organization noted that is "significantly larger" than the 1.6 per cent fall recorded in the first quarter of 2009 at the height of the financial crisis.

The OECD said that China was the only G-20 country recording growth (11.5 per cent) in that period. The organization said that reflects "the earlier onset of the pandemic in this country and subsequent recovery."

HERE'S WHAT YOU NEED TO KNOW ABOUT THE VIRUS OUTBREAK

— In defiance of Nevada's coronavirus restrictions and US guidelines, Trump  holds indoor rally in front of largely maskless crowd

— To door knock or not? Candidates are evolving tactics of political campaigning  in coronavirus pandemic era

— First post-winter US flight arrives in Antarctica, with scientists making extra effort to keep the continent free of coronavirus

The Myanmar Football Federation said work will be completed this week at a stadium to serve as a temporary quarantine centre.

The Health Ministry announced 83 new confirmed cases of coronavirus on Monday, bringing the total to 3,015. It also reported six new deaths, for a total of 24.

Yangon General Hospital is expanding its wards and setting up tents to accommodate virus patients, and other hospitals are doing the same.

Myanmar reimposed tough virus-control measures on Friday, banning travel out of Yangon and grounding all domestic flights until October 1.

MILAN — Italy's former Premier Silvio Berlusconi has been released from the hospital after a 10-day stay with COVID-19 and pneumonia, saying he had never feared as much for his life as from this "insidious" disease.

He sent a special appeal to Italy's students, millions of whom were returning to school for the first time Monday since early March, when Italy became the epicentre of the outbreak in Europe and schools shut down.

Berlusconi, who has had heart problems and uses a pacemaker, thanked his doctors at San Raffaele hospital in Milan and acknowledged most Italians in his condition didn't survive the virus. He said: "I overcame what I consider perhaps the most dangerous challenge of my life."

LISBON, Portugal — Portuguese Prime Minister Antonio Costa has told teachers and students they are embarking on "the most unusual school year of your lives" as classes resume amid the pandemic.

Costa said in a speech at a school Monday that he expected problems to arise, but insisted that the future of younger generations cannot be compromised.

Schools are reopening this week under new regulations to prevent the spread of COVID-19. Face coverings are mandatory for students from the age of 12, except during physical education. Staff must wear masks at all times.

Schools will keep doors and windows open whenever possible, to keep air circulating, and classrooms are to be disinfected after each class. Classes are being staggered to avoid large gatherings in corridors. Breaks are shorter than usual, and each class has a designated outside area they must stay in between classes.

BUCHAREST, Romania -- Some 2.8 million Romanian schoolchildren have begun their academic year, with classes being held in classrooms, online or a combination of the two, depending on the intensity of the pandemic in a given region.

President Klaus Iohannis told children in a video message Monday that they have the opportunity to be superheroes by wearing masks, washing their hands and listening to their teachers to protect their parents and grandparents, those most at risk from the virus.

Prime Minister Ludovic Orban said he was confident that children would be safer in schools than on playgrounds or sports facilities.

Since September 1, Romania has averaged about 1,225 new infections a day, slightly higher than during the last two weeks of August.

Germany's disease control centre on Monday reported 927 new cases across the country in the past day.

One county that's seen the number of infections in a week rise above the threshold of 50 per 100,000 is Garmisch-Partenkirchen in Bavaria.

Locals there have reacted with anger to news that a 26-year-old American woman with symptoms had visited several local bars despite being told to quarantine while waiting for her test result.

As a result, all restaurants in the Alpine town must close at 10 p.m. for the next week.

STOCKHOLM — Sweden has removed Britain from its list of countries with travel warnings, allowing Swedes to travel to the United Kingdom.

At the same time, the Foreign Ministry in Stockholm said Sweden is now part of a group of countries for which the United Kingdom considers that the risks regarding the virus are lower and is no longer covered by Britain's quarantine regulations.

Swedish authorities said the easing of restrictions implemented for Swedish travelers was taken into account when deciding to remove the travel warning for Britain on Monday.

The Foreign Ministry said in a statement that "this does not mean that the situation is as usual again." It said local regulations, restrictions and requirements for quarantine that affect Swedish travelers can be reintroduced at short notice if the situation changes.

ISLAMABAD — Pakistan's prime minister and education officials say all arrangements are in place to ensure that every child can go to school safely.

Authorities are preparing to reopen schools from Tuesday amid a steady decline in COVID-19 deaths and infections.

Prime Minister Imran Khan took to twitter Monday saying "tomorrow we will welcome millions of children back to school. It is our priority & collective responsibility to ensure that every child can go to school safely to learn."

Khan's comment come as education officials said they have finalized arrangements to reopen schools, which were closed in March when the government enforced a nationwide lockdown. Authorities lifted curbs on most of the businesses in May, but schools remained closed across the country.

On Monday, Pakistan reported four new deaths from COVID-19 in the past 24 hours, one on of its lowest totals in more five months.

NEW DELHI — India reopened its Parliament after more than five months Monday even as the country continues to report the most daily new infections of the coronavirus in the world and daily virus deaths remain above 1,000.

Lawmakers must wear masks and follow other sanitization protocols, sit on seats separated by transparent plastic sheets and keep their meetings limited. The Question Hour, when lawmakers ask questions to ministers and hold them accountable for the functioning of their ministries, will not be allowed.

Opposition parties have protested the decision to do away with the Question Hour and are expected to grill the government over its handling of the pandemic, the nosediving economy and simmering tensions with China.

India's Health Ministry reported a single-day spike of 92,071 confirmed coronavirus cases Monday and another 1,136 deaths. India has now reported more than 4.8 million infections and more than 79,700 deaths since the pandemic began.

Jakarta Governor Anies Baswedan announced the restrictions Sunday, to last from Monday to September 27, to combat a virus outbreak he called an emergency situation.

Social, economic, religious, cultural and academic activities will be restricted, with 11 essential sectors, like food, construction and banking, allowed to operate with health protocols and 50 per cent of usual staffing levels.

Baswedan said last week the hospital capacity for isolation and intensive-care rooms has exceeded the safe limit and is estimated to reach the maximum capacity on Thursday.

WELLINGTON, New Zealand — New Zealand will keep its virus restrictions in place for at least another week as the country continues to battle a small outbreak that began in Auckland last month.

Prime Minister Jacinda Ardern said Monday the country had taken a cautious approach to the virus from the beginning, which had helped save lives and allowed the economy to reopen in a sustained way.

Ardern said New Zealand will continue its strategy of trying to eliminate the virus. Under the restrictions, everybody must wear masks on public transport and planes, and the sizes of most gatherings are limited to 10 in Auckland and 100 elsewhere.

Health authorities announced one more case of the virus on Monday, bringing the number of active cases to 96.

SEOUL, South Korea — South Korea has reported its lowest daily virus tally in about a month as it began easing its tough social distancing rules in the greater Seoul area.

The Korea Disease Control and Prevention Agency said the 109 new cases took the country's total to 22,285 with 363 deaths. The daily increase has stayed in the 100s for 12 straight days, but Monday's increase was the lowest since mid-August.

The government on Sunday relaxed its physical distancing guidelines in the Seoul area, citing a downward trend in new infections and economic worries.

The rules effective Monday allow customers to eat and drink inside franchise cafes and bakeries and indoor gyms and after-school academics can reopen. A ban on late-night dining at restaurants was also lifted. Distancing and masks are still required.

CANBERRA, Australia — An Australian health official has revealed that she has been under police guard because of death threats and growing public anger over pandemic border restrictions.

Queensland state Chief Health Officer Jeannette Young said Monday that she now travelled with a police escort because of the threats.

The Queensland state government has been under mounting criticism for making travellers spend two weeks in hotel quarantine when they cross the state border from other parts of Australia.

The restrictions have led to a number of high-profile incidents, including one last week in which a woman was not allowed out of quarantine to attend her father's funeral.