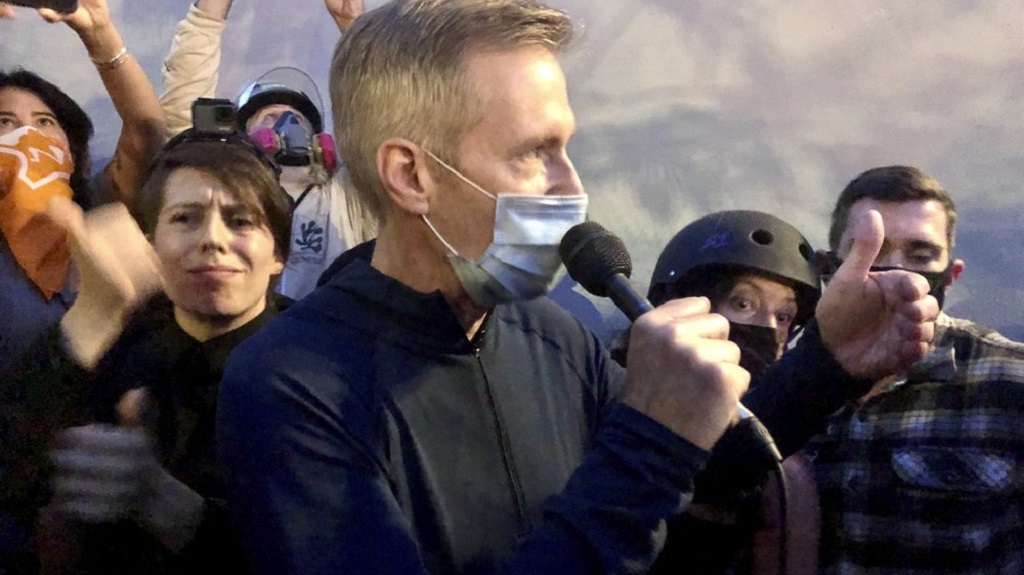 Mayor Ted Wheeler speaks to people gathered in downtown Portland, Ore., Wednesday, July 22, 2020. Wheeler faced a hostile crowd of protesters, who screamed at and sharply questioned him as he tried to rally demonstrators who have clashed repeatedly with federal agents sent in by President Donald Trump to quell ongoing unrest in the city. (AP Photo/Gillian Flaccus)

The mayor of Portland, Oregon, was tear gassed by the US government late Wednesday as he stood at a fence guarding a federal courthouse during another night of protest against the presence of federal agents sent by President Donald Trump to quell unrest in the city.

Mayor Ted Wheeler, a Democrat, said it was the first time he'd been tear gassed and appeared slightly dazed and coughed as he put on a pair of goggles someone handed him and drank water. He didn't leave his spot at the front, however, and continued to take gas.

Around Wheeler, the protest raged, with demonstrators lighting a large fire in the space between the fence and the Mark O. Hatfield Federal Courthouse and the pop-pop-pop of federal agents deploying tear gas and stun grenades into the crowd.

It wasn't immediately clear if the federal agents knew Wheeler was in the crowd when they used the tear gas. 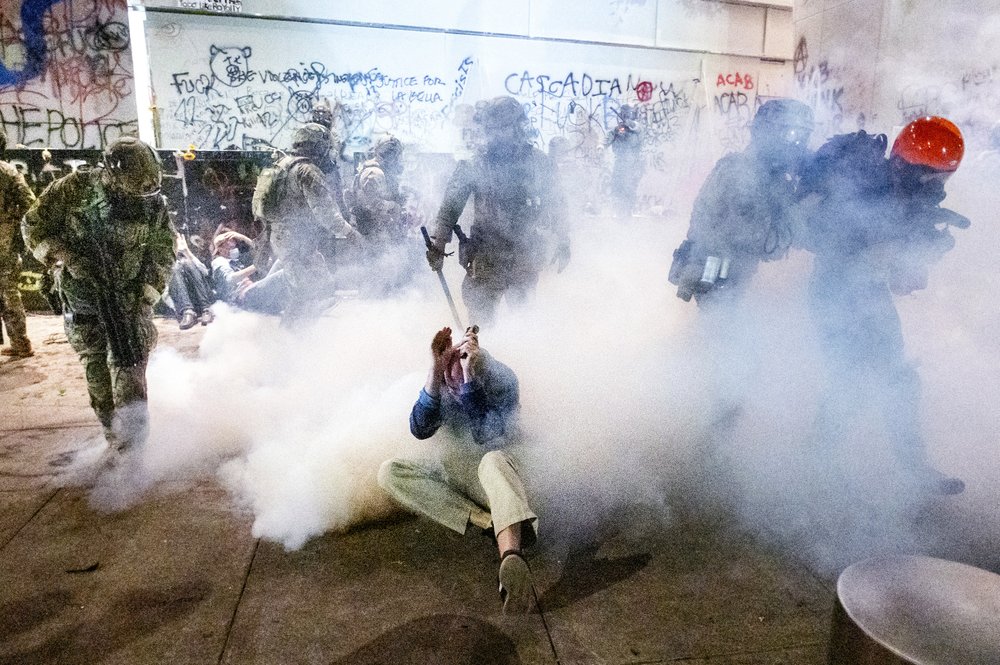 Earlier in the night, Wheeler was mostly jeered as he tried to rally demonstrators who have clashed nightly with federal agents but was briefly applauded when he shouted "Black Lives Matter" and pumped his fist in the air.

The mayor has opposed federal agents' presence in Oregon's largest city, but he has faced harsh criticism from many sides and his presence wasn't welcomed by many, who yelled and swore at him.

"I want to thank the thousands of you who have come out to oppose the Trump administration's occupation of this city," Wheeler told hundreds of people gathered downtown near the federal courthouse.

"The reason this is important is it is not just happening in Portland ... we're on the front line here in Portland."

Some Portland residents, including City Council members, have accused Wheeler of not reining in local police, who have used tear gas multiple times before federal agents arrived early this month in response to nearly two months of nightly protests since George Floyd was killed.

Others, including business leaders, have condemned Wheeler for not bringing the situation under control before the agents showed up.

Protesters in the crowd held signs aloft that read "Tear Gas Ted" in reference to the Portland Police Bureau's use of the substance before federal agents arrived.

When the mayor left the protest, around 12:40 am, some protesters surrounded him and shouted angrily at him as he walked away. One person shouted, "You've got to be here every single night!"

While taking questions Wednesday night — and before he was tear gassed — Wheeler was criticized for the actions of his own police department, not defunding the local police, national movement that seeks to redirect funds from policing to community needs like housing and education, and not having Portland police protect people from federal agents.

The mayor said he wants to use the energy of the protests to make changes.

Wheeler then addressed the much larger crowd from a raised balcony, saying "I am here tonight to stand with you."

Wheeler's tense night-time appearance downtown came hours after attorneys for Oregon urged a judge to issue a restraining order against agents deployed to quell the protests.

The arguments from the state and the US government came in a lawsuit filed by Oregon Attorney General Ellen Rosenblum, who accuses federal agents of arresting protesters without probable cause, whisking them away in unmarked cars and using excessive force. Federal authorities have disputed those allegations.

The lawsuit is part of the growing pushback to Trump sending federal agents to Portland and announcing they would be going to Chicago and Albuquerque, New Mexico, to fight rising crime, a move that's deepening the country's political divide and potentially setting up a constitutional crisis months ahead of the presidential election. Democratic mayors of 15 cities condemned the use of federal officers in a letter to the US attorney general.

The court hearing focused on the actions of more than 100 federal agents responding to protests outside the Mark O. Hatfield Federal Courthouse, which has been a target for the demonstrations.

The motion for a temporary restraining order asks US District Judge Michael Mosman to command agents from the Department of Homeland Security, Customs and Border Patrol, Federal Protective Service and US Marshals Service to immediately stop detaining protesters without probable cause, identify themselves and their agency before arresting anyone, and explain why an arrest is taking place.

The state acknowledged that federal agents have the right to defend the courthouse but argued that they had overstepped. 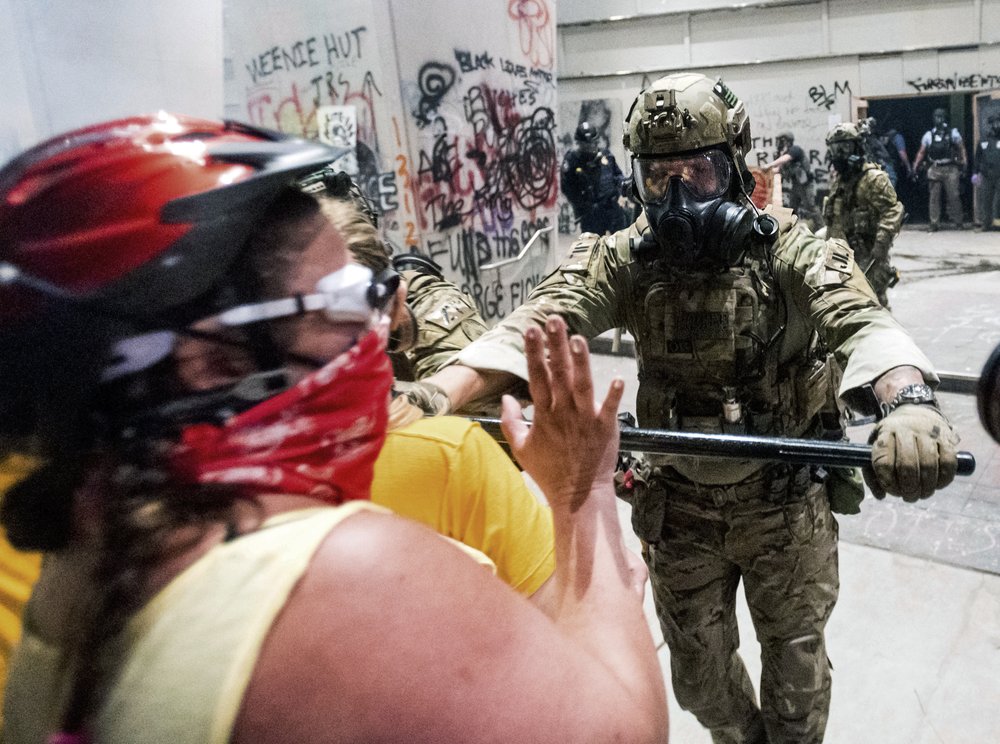 (Photo: A federal officer pushes back demonstrators at the Mark O. Hatfield United States Courthouse on Tuesday, July 21, 2020, in Portland, Ore. A federal judge is hearing arguments on Oregon's request for a restraining order against federal agents who have been sent to the state's largest city to quell protests that have spiraled into nightly clashes between authorities and demonstrators.(AP Photo/Noah Berger)

Rosenblum, the state attorney general, said she wanted the court to "declare it not acceptable for federal officers to use unconstitutional, police-state-type acts to detain citizens of Oregon without cause."

David Morrell, an attorney for the US government, called the motion "extraordinary" and said it was based solely on "a few threadbare declarations" from witnesses and a Twitter video.

"The Hatfield courthouse did not damage itself," he said, calling the protests "dangerous and volatile."

The lawsuit is one of several filed over authorities' response to the Portland protests.

On Thursday, a judge will hear arguments in a legal challenge that the American Civil Liberties Union filed on behalf of journalists and legal observers who say they were targeted and attacked by Portland police while documenting demonstrations.

A freelance photographer covering the protests for The Associated Press submitted an affidavit that he was beaten with batons, chemical irritants and hit with rubber bullets.

A US judge previously ruled that journalists and legal observers are exempt from police orders requiring protesters to disperse once an unlawful assembly has been declared. Federal lawyers say that journalists should have to leave when ordered.

The ACLU filed another lawsuit Wednesday on behalf of volunteer medics who have been attending to injured protesters.

It alleges that federal agents have used rubber bullets, tear gas, pepper spray, batons and stun grenades against medics in violation of federal protections for freedom of speech and freedom of movement.

Police say protesters have tried repeatedly to break into the federal courthouse and set fires around it and that the federal agents drive them back with tear gas and stun grenades.

Federal authorities have defended their response, saying officials in Oregon had been unwilling to work with them to stop the vandalism against the US courthouse and violence against federal officers.

Growing opposition against US federal agents in protesting cities