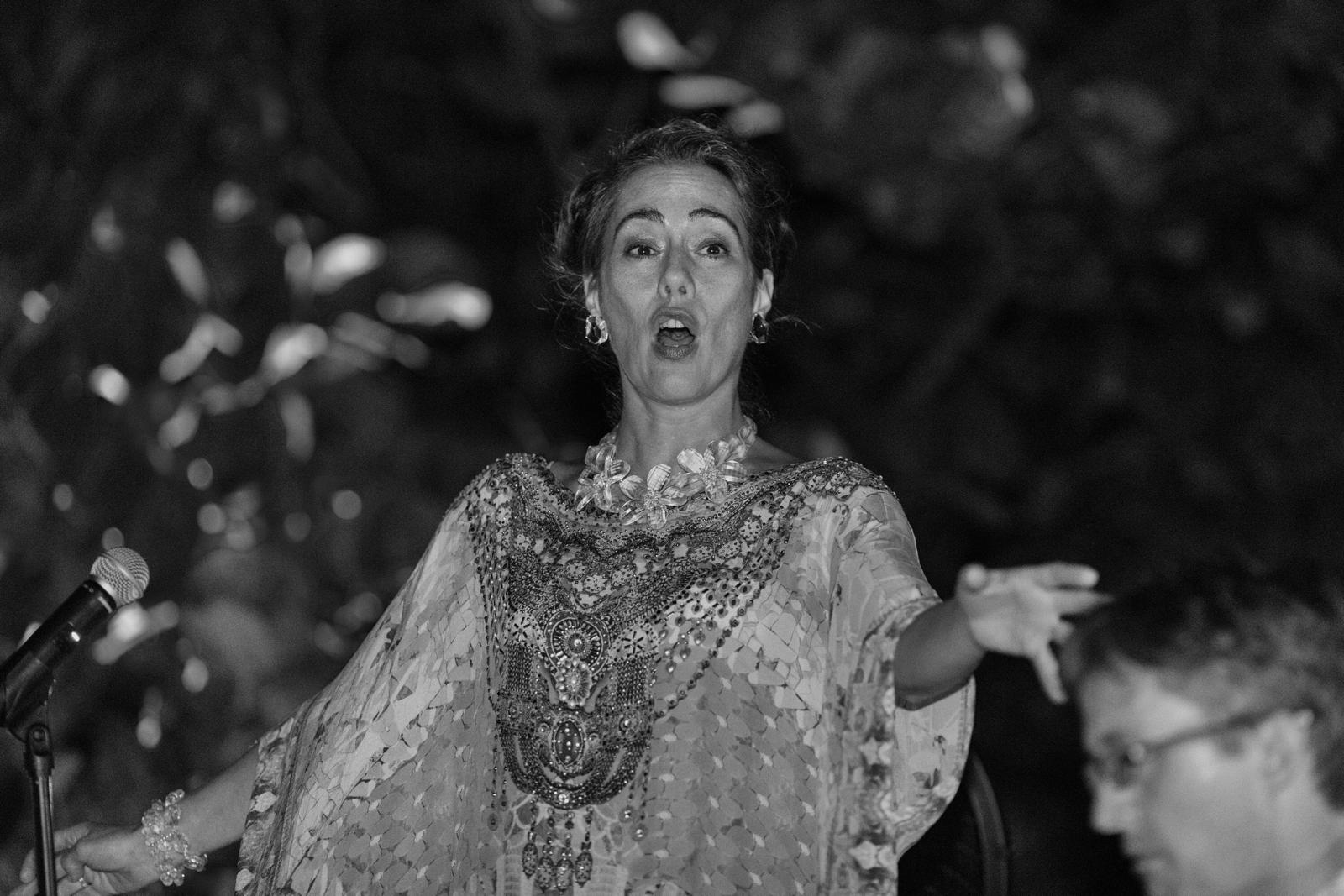 The soprano and satirical cabaret star, Melinda Hughes was recently flown into Barbados for three nights of opera and cabaret at the Cobblers Cove Hotel.

‘It was really well received! We’ve gone down really well here! They loved us! They were people really, really laughing a lot and I was pleasantly surprised because although English is the common language I thought they wouldn’t know about certain idiosyncracies that are very London. I hoped they’d get it, and they did."

Her style is not a pill that everyone can swallow or understand, so she was truly over the moon gushing at the audience's response.

"We had really, really good audiences [for the satirical cabaret] and we also had really good audiences for the opera because it’s so unusual to get that here. It’s not everyday an opera singer comes here so people are going to come not really for that but also for a very special evening where it’s atmospheric, there is Chinese lanterns and it looks beautiful. Opera sets a romantic theme, you don’t even need to know anything about the opera just to experience such a magical evening," said the popular opera singer who has sung in more than 40 countries around the world.

Looking back on her performances at Cobblers Cove from November 17-19, Hughes complimented Barbadians for their warm, inviting personalities:

"I love the people. I’ve had such a great laugh. Everyone is so welcoming and hospitable. I hope to be back soon. I think we might just come back on holiday in February. I’ve met some really cool people and it’s lovely to go away and be somewhere where you get a holiday vibe but yet you’re not going to get bored because there’s always things to do. The people are fun and there’re good restaurants.’"

Although her two weeks here was stationed at Cobblers Cove, Hughes made sure she to make full use of her opportunity. On her third visit to the island, she limed with friends, chilled in Speightstown and even attended the Food and Rum Festival event at the Cliff.

Speaking to Loop before she took flight back to London, last week, she gave a glimpse of her opera career, which started in the late 90’s:

"I’ve been an opera singer since the late 90’s and I’ve done a lot of freelance work, doing different work for different companies all over Eroupe and England. I’ve also toured the United States singing 'Madame Butterfly'. I also toured for about four years with Andre Rieu who is a very famous violinist. I was his soloist for just under four years and we were singing for about 10,000-seater arenas or stadiums. I also do a lot of concerts but I also write theatrical cabarets. I write funny songs about what is going on in life. It could be about Donald Trump taking too many selfies or making fun of the Aristocracy."

Expanding on what she meant, she shared an anecdote saying:

"We’ve got one song called 'The Selfie Song' where we were in Mykonos and everyone was walking around with the selfie sticks, everyone was at dinner taking selfies and weren’t speaking to each other. Everyone was just almost really isolated and just taking selfies all the time and it became so annoying. So I thought, 'This may be quite a funny song about a girl who can’t stop taking selfies of her romantic holiday; she takes so many that one day when they’re taking a moonlight walk along a cliff edge she falls off it 'cause she can’t get the angle right. She was so desperate to get the angle right that she falls off, but before she dies, before she crashes to the bottom she manages to upload the selfie on Twitter which she sees as a massive achievement. She dies happy'."

In terms of her most highly demanded piece Hughes singled out one of her newest releases, ‘I’m going to meet Prince Harry’, which tells a funny story about a girl who was so excited to meet Prince Harry that she got drunk before she had the chance to.

With a smile, she said, "It’s about a girl who meets Prince Harry and she’s very excited but he’s rather delayed so they keep giving her more and more champagne. She keeps getting more and more drunk [sic] and finally when he turns up, she’s so overwhelmed with excitement that she just blacks out, so she’s ruined her big moment. She couldn’t remember anything that she has done but she gets a text the next day from him saying, ‘Hey you were so much fun, do you want to go out for a drink?'" 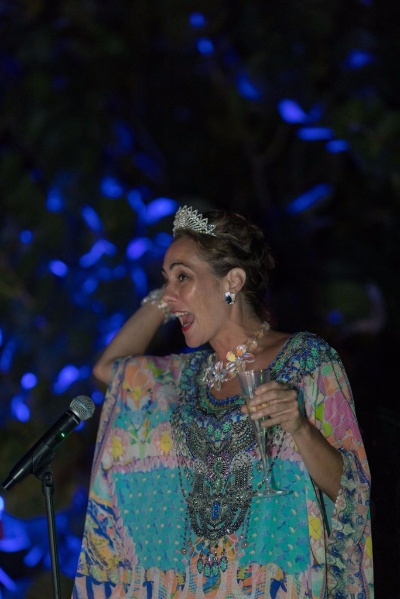 Another highly requested piece she said is one about living in the British countryside, "making fun of people who have big old rambling houses in the country where nothing works. The British are very good at laughing at themselves."

The Melania Trump look-alike who also did some pieces on politicians admitted that "it was very fun to do" and she confessed with a smirk that she would probably be doing some more songs as Melania in the future.

She said that's very fun to play the 'Trump' card. "He’s what we call the gift that keeps on giving... I think he is totally ridiculous but the way for us to do it is in song, it’s not to stand there and say how stupid he is but to make fun of things in a clever way. I also do a good Melania Trump impersonation and I’m rather interested in her. I feel very sorry for her. When I put a lot of makeup on and I have that kind of frozen face then I put the accent on [and] I could pass for a good Melania Trump, so that’s quite fun to do. We’ll probably be doing some more songs as Melania."

In terms of ever being in a Broadway play like Chicago, Hughes confessed that she wasn’t sure she’d enjoy it.

"I’ve done ‘The King and I’ but I’ve not done much musical theatre. I would, but musical theatre tends to run for a long time so if you get a role you have to do it for like eight months and I think I might go insane if I have to sing the same thing every night for eight months.

"There’s not many people who do Satirical Cabaret. I think because I do the satire it makes the programme more broad for people who might be afraid of opera, they can know they’re going to get some funny things as well so they’re going to go for that. You get to broaden the appeal to more people rather than people who would just like opera because I know sometimes it can be an acquired taste."

When she returns to London, the next step is to attend auditions and continue writing some original pieces:

"We’re writing some new material and we’ll hopefully come back to Barbados next spring and I’d like to perform here more, I love it here! I had such a great experience and I’d love to do more and share my humour and the opera with people in the island whether they’re local, they live here or there're tourists, it’ll be something different!’

"I also perform six times a year at a very famous cabaret venue called Zedel. I also do a lot of festivals and private parties and the life is varied because I might be doing an opera role or a classical concert and then someone asks me to write a song about pineapples or whatever, or it could be someone’s fiftieth birthday party. We’ve always got different  things  going on which is fun."