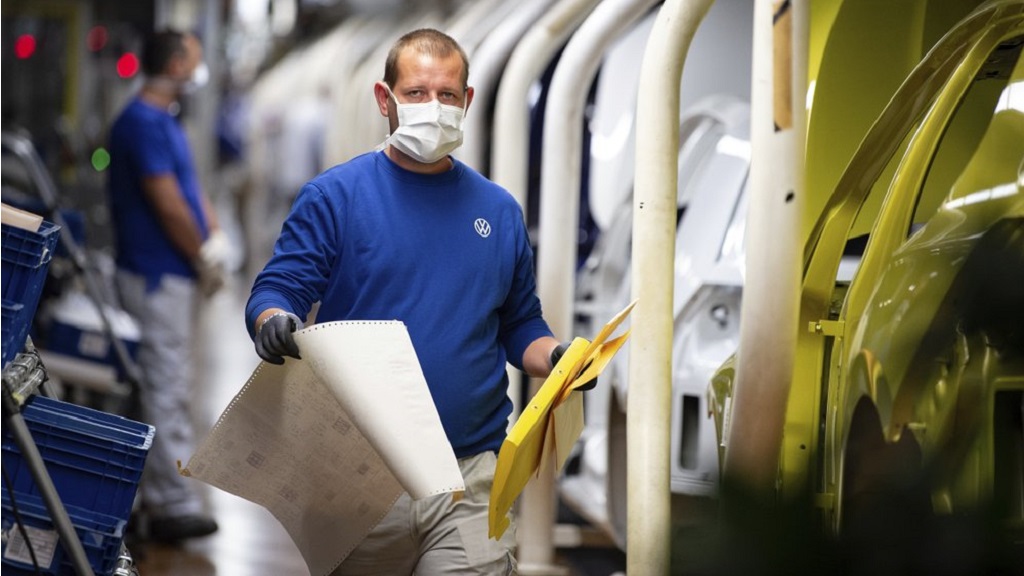 An employee walks past vehicles in production with a face mask in the VW plant in Wolfsburg, Germany, Monday, April 27, 2020. Volkswagen is gradually launch the production at important plants after the corona lockdown. (Swen Pfoertner/dpa via AP)

Nations and US states have begun easing coronavirus lockdowns, each pursuing their own approach but all with a common goal: restarting their economies without triggering a new surge of infections.

Restrictions are being lifted in a piecemeal fashion with no clear signs of coordination among countries. Some have restarted construction work, while others never shut down building sites in the first place. Hair salons and restaurants were reopening in some US states, while elsewhere such steps are still weeks away.

British Prime Minister Boris Johnson was back at work Monday after a bout with the virus that by his own account nearly cost the 55-year-old leader his life. His government was resisting the trend toward reopening. 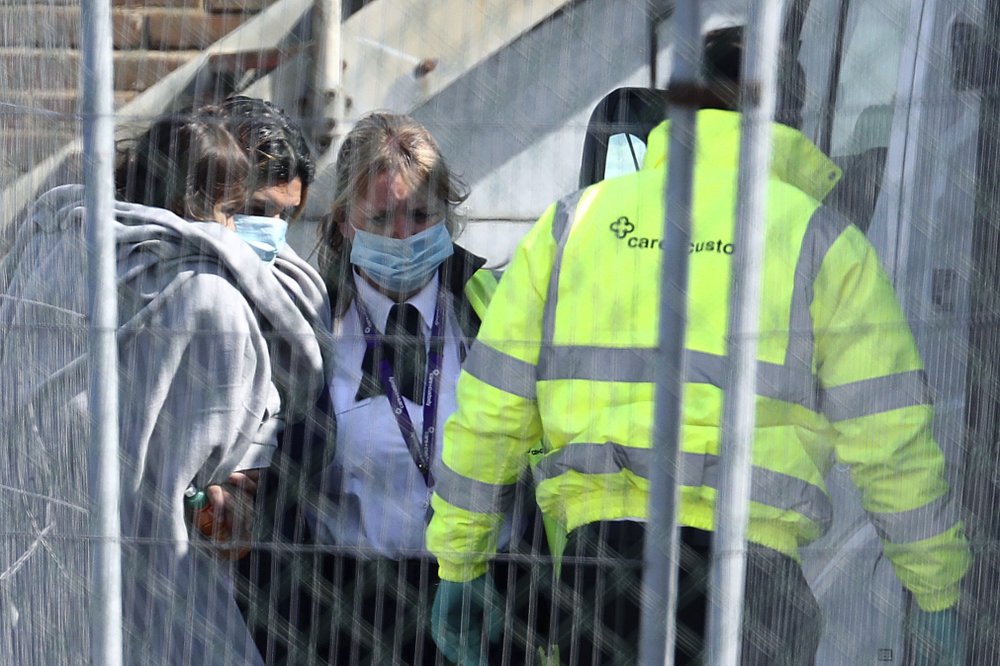 (Photo: A woman and child wearing masks to protect against coronavirus, thought to be migrants, are escorted to a van by Border Force officials after being brought to shore, in Dover, England, Monday, April 27, 2020, following a number of small boat incidents in the Channel, amid the lockdown to help curb the spread of coronavirus. (Gareth Fuller/PA via AP)

Johnson said Britain was starting to "turn the tide" on the outbreak but added "it is also the moment of maximum risk" because easing the lockdown that now lasts until May 7 could produce a second spike in infections.

"I refuse to throw away all the effort and the sacrifice of the British people  and to risk a second major outbreak and huge loss of life and the overwhelming of the NHS (National Health Service)," he said. "I ask you to contain your impatience."

Technology is likely to play an important role in helping countries ease their restrictions, although the use of such apps is raising privacy concerns.

In Australia, which has seen a particularly low number of COVID-19 deaths, Chief Health Officer Damian Murphy said Monday he was "really excited" by the early popularity of an app designed to accelerate contact tracing for coronavirus.

Within 12 hours of the Australian-developed COVIDsafe app becoming available, 1.13 million of Australia's 26 million people had downloaded it onto their smartphones, despite some privacy concerns.

Australian officials intend to rush legislation through Parliament to outlaw use of collected data for purposes other than tracing people who might have COVID-19. They have also promised to release the app's source code within two weeks so independent analysts can better understand how it works and its privacy implications.

The government says at least 40% of Australia's population needs to use the technology based on Singapore's TraceTogether app for it to be effective.

This week, Australia will resume non-urgent surgeries this week for the first time since March 27. The country has 83 recorded coronavirus deaths. In New Zealand, people will be able to buy takeout restaurant food again starting at midnight Monday.

(Photo: A family wearing face mask to protect of the coronavirus go for a walk, in Pamplona, northern Spain, Sunday, April 27, 2020. On Sunday, children under 14 years old will be allowed to take walks with a parent for up to one hour and within one kilometer from home, ending six weeks of compete seclusion. (AP Photo/Alvaro Barrientos)

In Spain, one of the worst-hit countries by the virus, Prime Minister Pedro Sanchez was to present a detailed plan Tuesday for the "de-escalation" of his country's lockdown, but said it would be cautious. His French and Greek counterparts were also unveiling their reopening plans Tuesday.

Spain's easing of restrictions kicked off Sunday as children under 14 were allowed to leave their homes for the first time in six weeks.

In a boost for the economy, the three Czech plants of Skoda Auto belonging to Germany's carmaker Volkswagen renewed production on Monday. The company creates some 34,000 jobs.

The official death toll from the virus neared 207,000 worldwide, with nearly 3 million confirmed infections, according to a tally by Johns Hopkins University. The pandemic's true toll is believed to be much higher, because of inadequate testing, differences in counting the dead and governments that are concealing the extents of their outbreaks.

The US death toll was nearly 55,000 — close to the 58,000 US troops who were killed during the Vietnam War. Italy, Britain, Spain and France accounted for more than 20,000 deaths each.

Some encouraging signs were seen, however, as Italy recorded its lowest 24-hour number of deaths since mid-March, with 260.

In China, state-run media said hospitals in Wuhan, the original epicenter of the pandemic, no longer have any COVID-19 patients. And in Japan, the central bank eased monetary policy, prompting a surge in the stock market.

Conte said parks and gardens will reopen, funerals will be allowed, athletes can resume training, and people will be able to visit relatives living in the same region from May 4. If all goes well, stores and museums will reopen May 18, and restaurants, cafes and salons on June 1.

In a measure dear to the hearts of his countrymen, professional sports teams can resume training on May 18. That means the Serie A soccer league could resume playing games in June.

Some worry that quickly lifting measures imposed to halt the coronavirus pandemic could spark a resurgence in infections.

In the US, governors in states including hard-hit New York and Michigan are keeping stay-at-home restrictions in place until at least mid-May, while their counterparts in Georgia, Oklahoma and Alaska are allowing certain businesses to reopen.

The split in approaches to reopening in the US has often been along partisan lines. 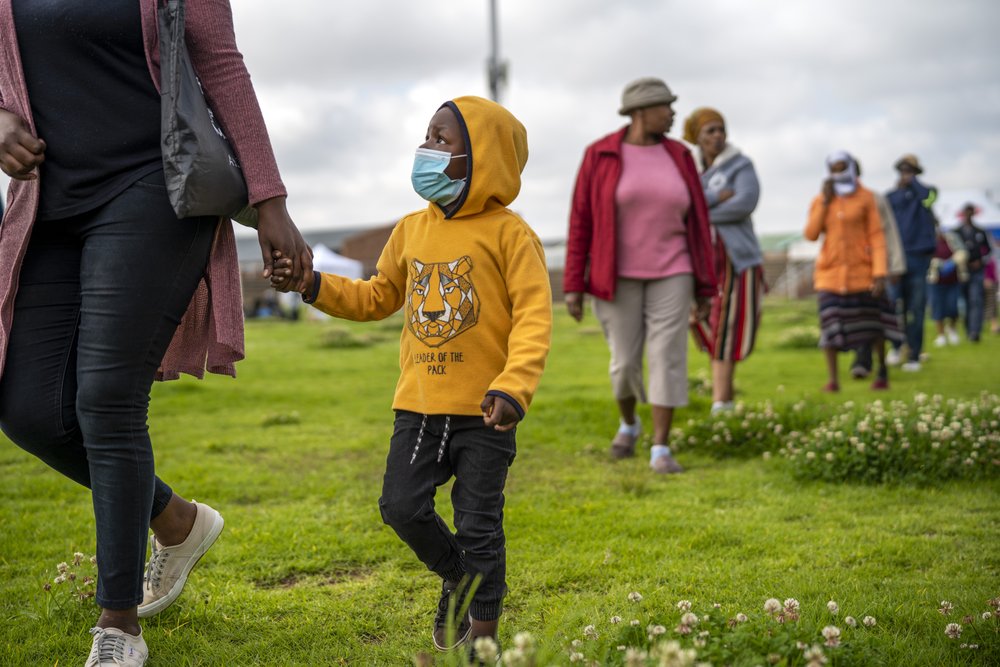 (Photo:Residents from the Alexandra township in Johannesburg gather in a stadium to be tested for COVID-19 Monday, April 26, 2020. South Africa will began a phased easing of its strict lockdown measures on May 1, although its confirmed cases of coronavirus continue to increase. (AP Photo/Jerome Delay)

Oklahoma Gov. Kevin Stitt, a Republican, said with hospitalizations dropping in his state, he will reopen churches and restaurant dining on Friday, with social-distancing guidelines in place.

But Michigan Gov. Gretchen Whitmer, a Democrat, told ABC that her state is not ready and needs more robust testing, community tracing and a plan for isolating people who get sick.

"We've got to be nimble and we have to follow the science and be really smart about how we reengage," she said.

In a sign that it could get harder to enforce restrictions, a lingering heat wave in California lured people to beaches, rivers and trails Sunday, prompting warnings that defiance of stay-at-home orders could reverse progress.

China, meanwhile, was fighting back against calls for an investigation into its role in the coronavirus pandemic, citing faults with the US response to the outbreak and calling for Washington itself to admit its errors.

"Indeed, lately in the US many people are questioning whether the US government responded in a timely and effective manner," Foreign Ministry spokesman Geng Shuang said at a daily briefing.

He suggested the World Health Organization could help investigate the US response.

That idea is unlikely to go over well with President Donald Trump, who has suspended payments to WHO in part because he claims the UN health agency has shown a pro-China bias.