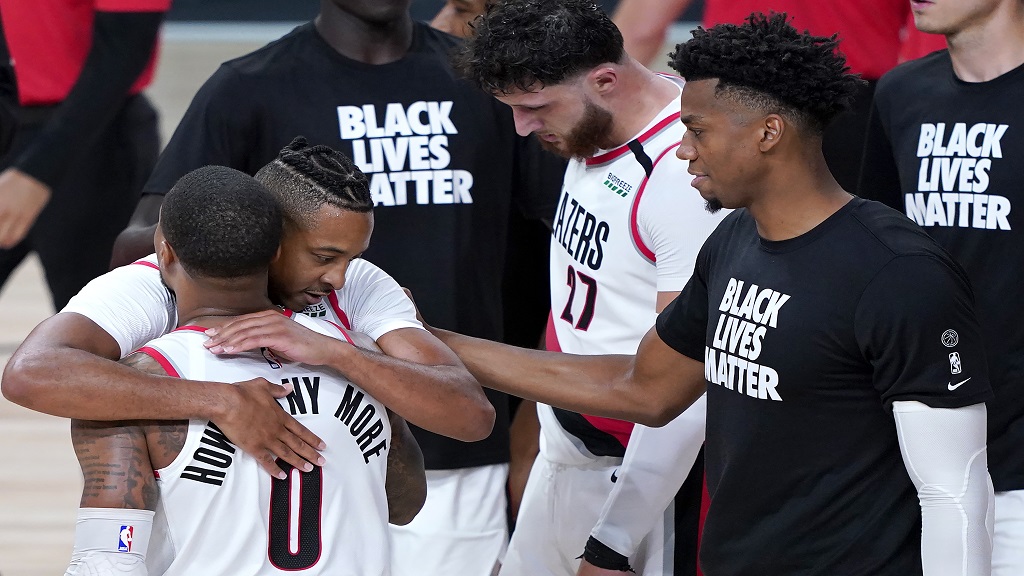 The Portland Trail Blazers dramatically set up a Western Conference play-in showdown against the Memphis Grizzlies as the red-hot Phoenix Suns missed out on the NBA playoffs.

Portland clinched the eighth seed in the west thanks to a nail-biting 134-133 win over the Brooklyn Nets in Orlando, Florida on Thursday.

The Suns improved to 8-0 at Walt Disney World Resort with a 128-102 victory against the Dallas Mavericks, and needed a Nets win to secure a play-in spot.

However, Damian Lillard's heroics of 42 points and 12 assists ensured the Trail Blazers clinched a play-in date against the Grizzlies – who trumped the Milwaukee Bucks 119-106 earlier in the day.

Phoenix (34-39) are the first team in NBA history to end the regular season on an eight-plus game winning streak and still miss the playoffs. The last team to do that in any of the four major sports were NHL's the Philadelphia Flyers in 1992-93, per STATS.

The Lakers lost 136-122 to the Sacramento Kings but LeBron James was still crowned the assist king in 2019-20. James had 17 points in 15 minutes, all in the first half. The three-time NBA champion and four-time MVP ends the regular season averaging a league-best 10.2 assists per game, ahead of the Atlanta Hawks' Trae Young (9.3). The 35-year-old also reached double figures in points in his 995th consecutive game.

Lillard has 154 points across his past three games, the second most by any player in a three-game span this season – behind himself in January (158). Per STATS, the last player with 150-plus points in two separate three-game spans in a season was Wilt Chamberlain in 1964-65.

Devin Booker put up 27 points as the Suns stayed unbeaten since the NBA's restart following the coronavirus pandemic, but it was not enough.

Dillon Brooks' 31 points led the way for the Grizzlies, while he was aided by team-mates Jonas Valanciunas (26 points, 19 rebounds, 12 assists) and Ja Morant (12 points, 13 rebounds, 10 assists).

Jusuf Nurkic scored 22 points and 10 rebounds, while CJ McCollum had 25 points for the Trail Blazers. Caris LeVert finished with 37 points for the Nets.

Friday will see teams play their final regular-season games before the playoffs start on August 17. The Denver Nuggets face the Toronto Raptors, the Miami Heat meet the Indiana Pacers, the Oklahoma City Thunder take on the Los Angeles Clippers and the Houston Rockets play the Philadelphia 76ers.