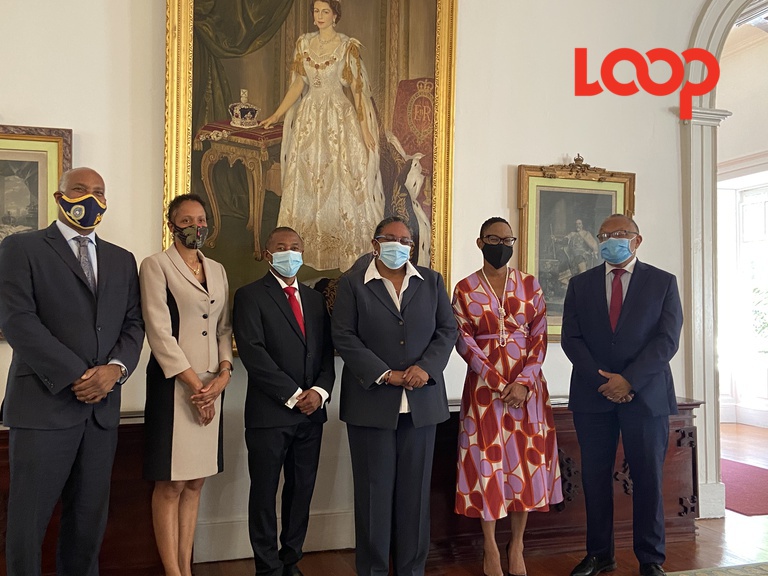 Newly-appointed Minister of Tourism and International Transport, Senator Lisa Cummins and Minister of Transport, Works and Water Resources, Ian Gooding-Edghill were sworn in by Her Excellency Dame Sandra Mason this afternoon (July 23) at Government House.

While addressing the local media, the two new Cabinet members said they were ready to hit the ground running and contribute to the transformation of the Barbados economy.

Appointed Minister of Tourism, Senator Lisa Cummins said she was not daunted by the hefty portfolio. She was ready and willing to take up the task of developing the island's tourism product.

"We are beyond sun, sea, and sand and we have had a lot of efforts been taken so far by Minister Kerrie Symmonds who has done a tremendous job of piloting us this far and I would want to be able to see that in the next two years we are able to see that Barbados stands apart not just from countries in the region but every other small island state that is offering more than sun sea and sand, but what that entails we will figure out in the next couple of weeks. We won't jump the gun yet but we will get there".

Meanwhile, Minister of Transport, Works and Water Resources, Ian Gooding-Edghill, who was previously on the chairman of the Transport Board and National Insurance Scheme Board, expressed his gratitude to Prime Minister Mia Mottley for inviting him to join the Cabinet. Gooding-Edghill went on to say he will give it his "best shot".

"I know it is a lot of work to be done and I intend to do her proud because I think it is necessary that we go forward as a Government transitioning the country to the position it ought to be at," he remarked.

The newly sworn-in Minister of Transport told the media that "the ability to assist with the transformation of Barbados" was his priority.

"There are multiple facets associated with the Ministry and we will hit the ground running and do what we have to do to help transform lives in Barbados and to help with our infrastructure," Gooding-Edghill added.