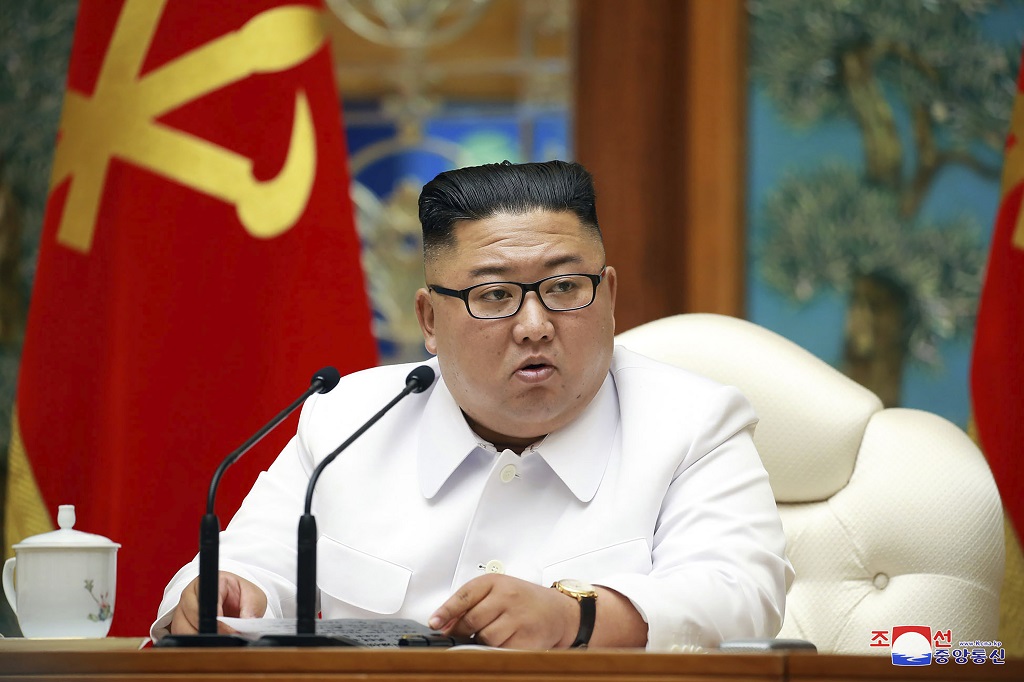 In this photo provided by the North Korean government, North Korean leader Kim Jong Un attends an emergency Politburo meeting in Pyongyang, North Korea Saturday, July 25, 2020. The content of this image is as provided and cannot be independently verified. Korean language watermark on image as provided by source reads: "KCNA" which is the abbreviation for Korean Central News Agency. (Korean Central News Agency/Korea News Service via AP)

North Korean leader Kim Jong Un placed the city of Kaesong near the border with South Korea under total lockdown after a person was found there with suspected COVID-19 symptoms, saying "the vicious virus" may have entered the country, state media reported Sunday.

If the person is officially declared a coronavirus patient, he or she would be North Korea's first confirmed case.

The North has steadfastly said it has had no cases of the virus, a claim questioned by outside experts.

The lockdown was declared Friday afternoon.

The North's official Korean Central News Agency said the suspected virus patient is a runaway who fled to South Korea three years ago before illegally crossing the border into the North early last week.

KCNA said respiratory secretion and blood tests showed the person "is suspected to have been infected" with the coronavirus. It said the person was placed under quarantine.

People who had been in contact with the suspected patient and those who had been to Kaesong in the last five days were also quarantined.

Describing its anti-virus efforts as a "matter of national existence," North Korea earlier this year shut down nearly all cross-border traffic, banned foreign tourists and mobilised health workers to quarantine anyone with symptoms.

But the Kaesong lockdown is the first such known measure taken in a North Korean city to stem the pandemic.

Foreign experts say a coronavirus outbreak in North Korea could cause dire consequences because of its fragile public health care infrastructure and chronic lack of medical supplies.

They are also skeptical about North Korea's claim of having had no infections because the country shares a long, porous border with China, its biggest trading partner, where the world's first known virus cases were reported in December.

Kaesong, a city with an estimated population of 200,000 is located just north of the heavily fortified land border with South Korea. It once hosted the Koreas' jointly run industrial complex, which has been shut since 2016 amid nuclear tensions.

Last month, North Korea blew up an inter-Korean liaison office in Kaesong to protest a campaign by South Korean activists who have been sending anti-Pyongyang leaflets across the border.

During an emergency Politburo meeting Saturday, Kim also declared a state of emergency in the Kaesong area and "clarified the determination of the Party Central Committee to shift from the state emergency anti-epidemic system to the maximum emergency system and issue a top-class alert," KCNA said.

It quoted Kim as saying there was "a critical situation in which the vicious virus could be said to have entered the country." Kim said he took "the preemptive measure of totally blocking Kaesong City and isolating each district and region from the other" on Friday afternoon after receiving the report on it, according to KCNA.

Analyst Cheong Seong-Chang at the private Sejong Institute in South Korea said a thorough lockdown in Kaesong would make it difficult for a potential virus outbreak to spread beyond the city. But he said virus fears would engulf North Korean leaders.

"The anxiety and fears about COVID-19 spreading in the North Korean leadership would be much bigger than outsiders can roughly speculate because the country lacks test kits and has virtually no facilities to treat virus patients," Cheong said.

The Politburo meeting also discussed the "loose guard performance" at the border area where the suspected patient crossed over to North Korea, KCNA said.

It said that Kim and other leaders were briefed on the results of an intensive investigation of a military unit responsible for the border crossing and discussed administering "a severe punishment."

More than 33,000 North Koreans have fled to South Korea over the past 20 years to avoid poverty and political suppression, mostly via China. But it is highly unusual for North Korean refugees to return to their impoverished, authoritarian homeland by crossing the mine-strewn inter-Korean border.

South Korea's military said later Sunday that its investigation into who crossed the border into North Korea was being narrowed down to a single, unidentified person.

A military statement said authorities were examining footage recorded by front-line surveillance equipment, but it gave no further details.

Some observers said authorities likely tried to determine who has been missing since last week among North Korean refugees in South Korea, especially among those originally from Kaesong.

"Blaming an alleged return defector for bringing COVID-19 into the country is likely intended to shift blame for spread of the virus away from China and Pyongyang and on to Seoul," said Leif-Eric Easley, a professor at Ewha University in Seoul.

"This may also be a tactic for ratcheting up diplomatic pressure on (South Korea) and trying to further dissuade North Koreans from defecting to the South," he said.

Cheong, however, said it was unlikely that the North's claim of the person crossing the border was false because it couldn't punish its own military unit with a fabricated announcement.

He said North Korea was unlikely to resume dialogue and exchanges with South Korea until it is confident about containing a possible virus outbreak.