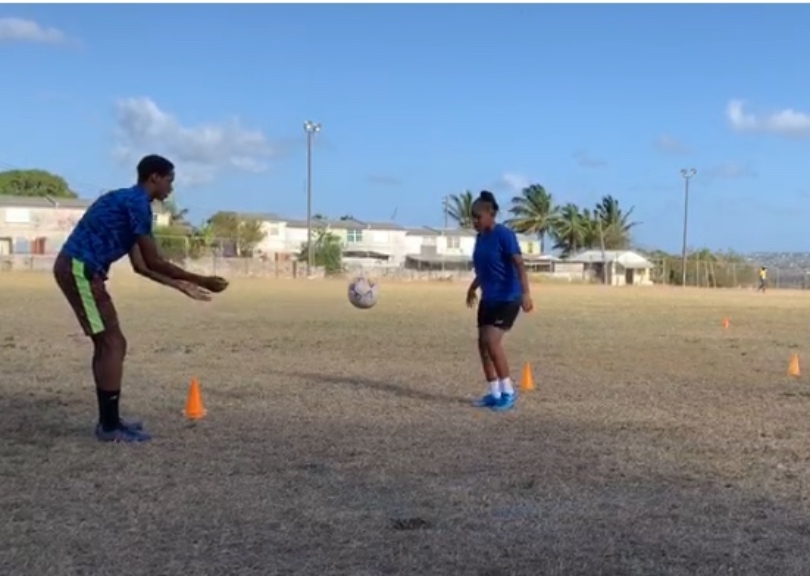 Richards gives some individual attention to one of his players

Knowledge is useless without someone to share it with.

Those are the words of 18-year-old Pine resident Devonte Richards.

The national Under 20 men’s footballer recently restored the Pinelands Women’s football programme, to the delight of many young and ambitious young ladies.

After four years of inactivity, Richards took the initiative to give back to his community in an area that he is not only good at, but one he considers has been a huge part of his development as a human being.

The talented midfielder has been a sporting ambassador for his community from as early as six years old when he first represented his beloved Pinelands Football Club.

It was here he developed his skills as a player but more importantly as a person.

Richards told LOOP Sports that he wanted to share these experiences, in addition to others he gained while being a national player and working with some of the best coaches.

While representing Comberemere in last year’s U19 School League, Richards said he was asked by one of the coaches to lend some assistance to the girls’ team and according to him, it all flowed from there.

He said he was expecting a drop in interest during the COVID-19 lockdown period but the girls remained motivated and some even joined him during his personal workout sessions.

Richards explained that he was able to maintain this interest by educating the ladies about the opportunities that may be earned from participation in the sport, the rapid growth that female football has made in recent years and also the health benefits of participating in physical activities such as football.

“There was one girl who was using it for exercise at first, but then she started to love football and continued to play”, said Richards.

Richards said it has been challenging but rewarding because he is encouraged by the determination and even swift improvement of the girls, which he said is down to their focus on detail.

“The key (to coaching females) is to be very patient and be willing to explain everything in clear detail, from the very basic level”, Richards said.

Educated and passionate about football, Richards, like most talented, young sportsmen, want to ply his trade professionally, however, he ultimately wants to be a coach or manager and believes the experiences gained with his first coaching post will provide a sturdy platform for his future.