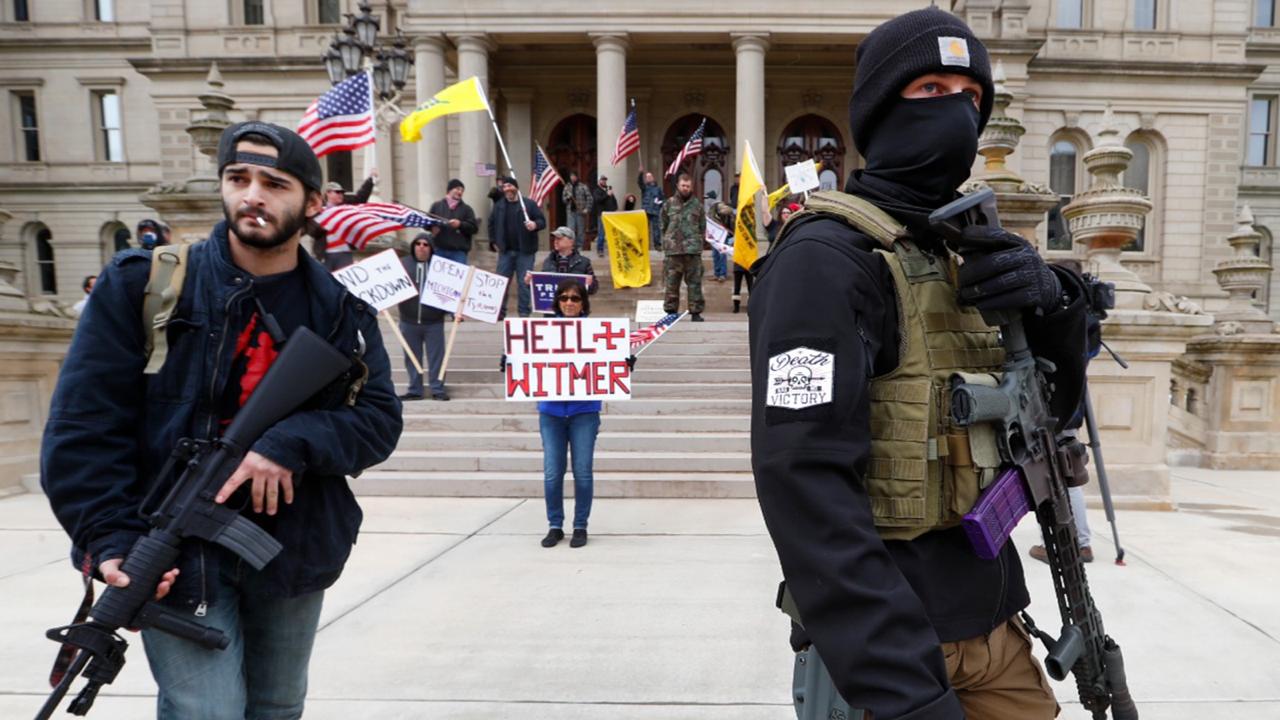 In this April 15, 2020 file photo, protesters carry rifles near the steps of the Michigan State Capitol building in Lansing, Mich. A plot to kidnap Michigan’s governor has put a focus on the security of governors who have faced protests and threats over their handling of the coronavirus pandemic. The threats have come from people who oppose business closures and restrictions on social gatherings. (AP Photo/Paul Sancya File)

A plot to kidnap Michigan’s governor has put a focus on the security of governors who have faced protests and threats over their handling of the coronavirus pandemic.

While the alleged plot against Gretchen Whitmer is the most specific and highest-profile to come to light, it’s far from the first threat against state officials, particularly Democrats who imposed business closures and restrictions on social gatherings.

In New Mexico, Governor Michelle Lujan Grisham said this week that news of the arrest of 13 men accused of planning the overthrow of Michigan’s government rattled members of her family.

“I started to get calls from both my daughters who were terrified and who were often included in some of the negative messaging,” Lujan Grisham said this week. “Early on in this pandemic. one of the threats that we got was ‘I hope your grandchildren get COVID.’ ”

In August, a man pleaded guilty to making threats against the Democratic governor on social media and was sentenced to 14 months in prison.

During the pandemic, the state Capitol that houses her office has been closed to the public. But its grounds have been the site of protests, including some who carried weapons and are militia members.

Even with the glass doors locked, State Police have at times deployed additional security measures, such as putting up opaque screens inside the doors to hide their exact location from protesters.

Across the country, armed protesters have rallied this year against coronavirus-related shutdowns. In Michigan, some protesters with guns were allowed inside the statehouse in April after passing temperature screenings. Some lawmakers wore bulletproof vests.

Protests both against virus restrictions and racial injustice this year have targeted not just the offices but also the homes of government executives. Fourteen unarmed protesters calling for the release of prison inmates, for instance, were arrested outside the gates of the residence of California Governor Gavin Newsom in July.

The offices of governors and those in charge of protecting them have declined to say how security has changed because of specific threats they face or the Michigan case. Several praised the security efforts around them.

But some governors are linking the threats to President Donald Trump, who on Twitter late Thursday condemned “extreme violence” while also blasting Whitmer, saying she has done a “terrible job.”

At a briefing Friday, Vermont Governor Phil Scott, a Republican, said elected officials “but especially at the top, must realize that words matter" and that rhetoric can lead to violence.

“We are reaching a boiling point in this country,” he said. “So it’s up to all of us to lower the temperature.”
Washington Gov. Jay Inslee singled out the president, who has often criticized Whitmer, for responsibility.

“It is very unfortunate that she has been troubled not just directly by these threats, but a constant barrage of, frankly, incendiary criticism from the president, and I think that’s been very unfortunate,” Inslee said.
New Jersey Governor Phil Murphy, who also serves as chairman of the
Democratic Governors Association called on Trump to denounce extremist groups.

“This shocking development is the most disturbing of the increasingly violent threats being made against Democratic governors by some of the most extreme and violent fringes of the right,” Murphy said in a statement.

“Unless and until President Trump openly denounces such right-wing extremism, groups like the Michigan Militia will continue to act as if they hold a permission slip from him to openly engage in such terrorist plots.”

The threat this year against public employees has risen enough that the bipartisan National Governors Association sent its members a memo in August laying out ways to try to discourage and deal with threats. Among them: Encouraging civil discourse with protesters, personally complying with mask and social distancing orders and prosecuting threats.

Over the nation’s history, violence against governors has been rare. The only time a US state governor died by assassination was in Kentucky in 1900, when Kentucky Governor William Goebel was shot in the chest near the old state Capitol days before he was sworn in after a disputed election. He died shortly after he took office.

In the same city this spring, current Kentucky Gov. Andy Beshear, a Democrat, was hanged in effigy from a tree on the state Capitol grounds in Frankfort in a protest of his coronavirus restrictions. In April, a man was charged after being accused of making threats against Beshear and Kentucky State Police troopers online.

This week, a fence began going up around the state’s executive mansion.