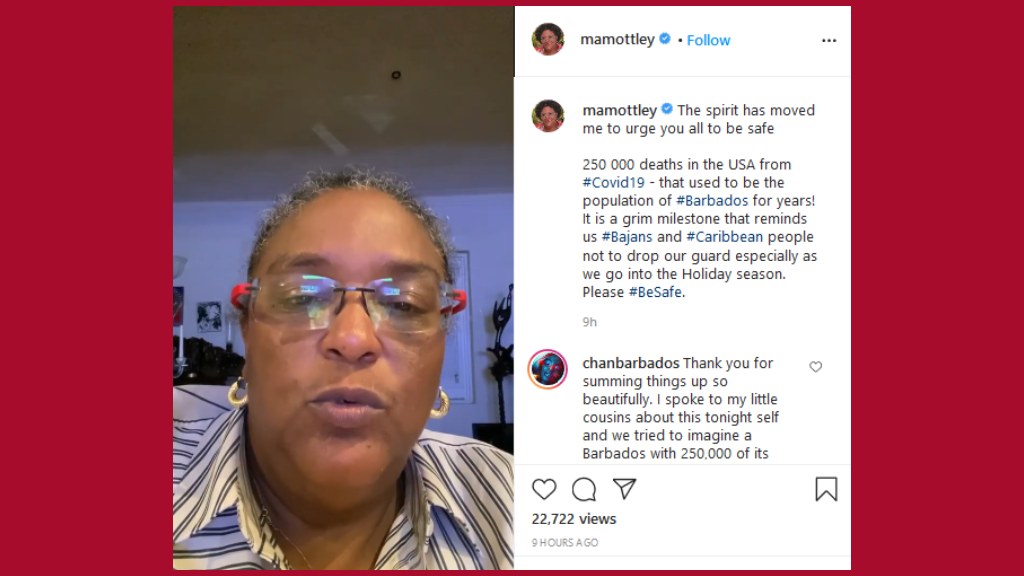 As the United States reaches another grim milestone, Prime Minister Mia Mottley has urged Barbadians across the globe to not drop their guard.

Prime Minister Mottley recorded a video message on Instagram urging Barbadians to take stock of the impact of the virus worldwide. She reminded followers that the number of reported deaths in the United States equates to the former population size of Barbados.

"250,000 deaths in the USA from #Covid19 - that used to be the population of #Barbados for years! It is a grim milestone that reminds us #Bajans and #Caribbean people not to drop our guard especially as we go into the Holiday season. Please #BeSafe," the Prime Minister posted as her caption.

In the four-minute video, the Barbadian leader reiterated the dier nature of the virus and the scale to which it is affecting us.

"It is a staggering, staggering, grim milestone. For some who feel that country has 350 million people and that quarter-million is not a lot, that may be so but for us in Barbados who know that our population for a very long time was a quarter-million for more than a decade, it really drives home the fact that the number of people who have lost their lives in the US equates to literally the size of our population and the bottom line is we have to pause and reflect on this thing."

The news comes as the world looks to breathe a sigh of relief at the news of a vaccine from Pfizer and Moderna that is said to have past ninety per cent efficacy.

However, the Prime Minister still wants Barbadians home and abroad to not rush in the coming weeks to gather, mindful of the coming holiday season.

"As we reflect I can say to you look next week is Thanksgiving and one of the reasons the spirit moved me to talk to you is to tell you the turkey going be there in 2021, you don't need to rush next week and gather beyond what you supposed to be doing and put yourself at risk. Don't do it, don't do it.

To the other Barbadians and Caribbean people, not just in the US but in Canada, UK, and Europe with the holiday season coming up, equally watch yourself and don't take foolish risks," Mottley said.

Prime Minister Mottley reassured Barbadians that we can indeed handle this crisis as long as we recommit to the proper COVID-19 precautions and safeguards.

"To my people here in Barbados, I hear a lot of people saying we got it we don't have it. We have it day by day only if we do the things day by day to keep it together. And I ask each of us to recommit . . . while we've done well so far, we must continue to do better. And who does better? Each and every one of us playing our part." Prime Minister Mottley said.