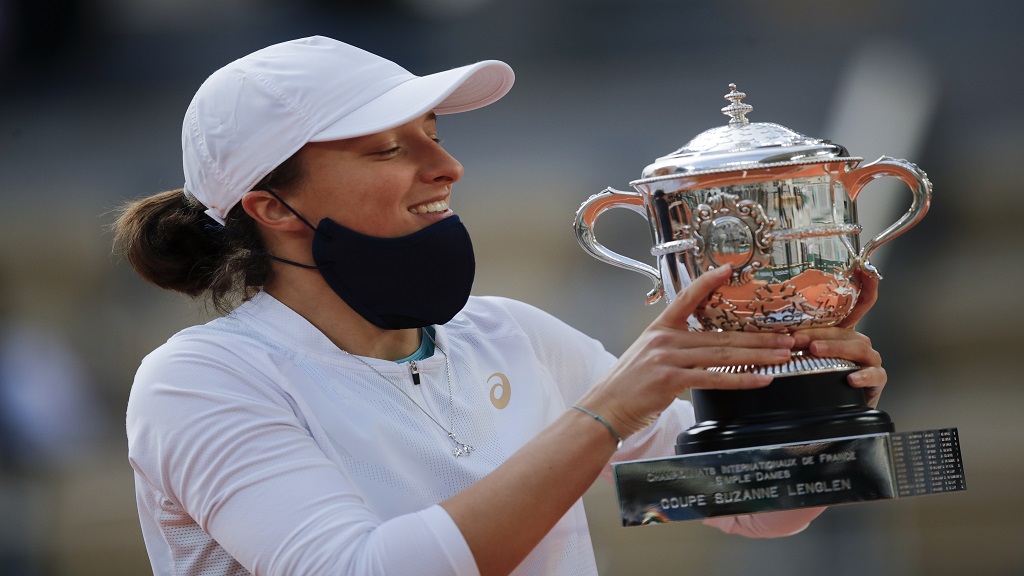 Poland's Iga Swiatek holds the trophy after winning the final match of the French Open tennis tournament against Sofia Kenin of the US in two sets 6-4, 6-1, at the Roland Garros stadium in Paris, France, Saturday, Oct. 10, 2020. (AP Photo/Christophe Ena).

With the poise of a veteran and the shots of a champion, 19-year-old Iga Swiatek picked the perfect place for her first tour-level title: the French Open.

When she smacked one last forehand winner to the corner to end things, Swiatek placed her right hand over her mouth then crouched, shaking her head.

Hard to believe? Maybe. This was, after all, only her seventh major tournament; she'd never been past the fourth round.

But the way she played these two weeks made this outcome less of a surprise.

Swiatek is the first woman to triumph in Paris without ceding a set since Justine Henin in 2007.

And she did it with victories over such opponents as 2018 champion Simona Halep and 2019 runner-up Marketa Vondrousova, both by scores of 6-1, 6-2.

So it made sense that Swiatek would be able to get past Kenin, a 21-year-old American who was trying to claim her second major title of 2020 after winning the Australian Open in February.

Kenin was 16-1 in Grand Slam matches until Saturday. But she dealt with a leg issue in the second set and showed frustration by kicking her red-white-and-blue racket after lost points.

And then there was this: She ran into the composed Swiatek, who only recently completed her high school studies, listens to “Welcome to the Jungle” by Guns N' Roses before walking on court and meditates during changeovers, breathing slowly with her eyes closed.

This weekend is the culmination of an unusual two weeks, to say the least. The tournament was postponed form May-June to September-October because of the coronavirus pandemic; the recently rising number of COVID-19 cases in France led the government to limit the number of spectators allowed on the grounds to 1,000 each day.

Some top women, including 2019 champion Ash Barty and three-time major champ Naomi Osaka didn’t enter the event; 23-time Slam winner Serena Williams withdrew before the second round with an injury.

The temperature was in the mid-50s (low teens Celsius), with a slight breeze, and the hundreds of fans scattered in Court Philippe Chatrier were mostly subdued — other than a group that would shout out Swiatek’s first name, stretching it out over several seconds each time to sound like “Eeeeeeeeeee-gah.”

At the changeover after the third game of the second set, Kenin was visited by a trainer and went off the court for a medical timeout, then returned with her left thigh wrapped.

Kenin said after her fourth-round match Monday that she had slipped and maybe pulled something during practice the day before.

While Kenin was gone, Swiatek tried to stay warm by pulling on a white jacket and hitting some serves, earning applause from spectators.

When play resumed, Swiatek needed only 12 more minutes to wrap up the victory, finishing with a 25-10 edge in winners.