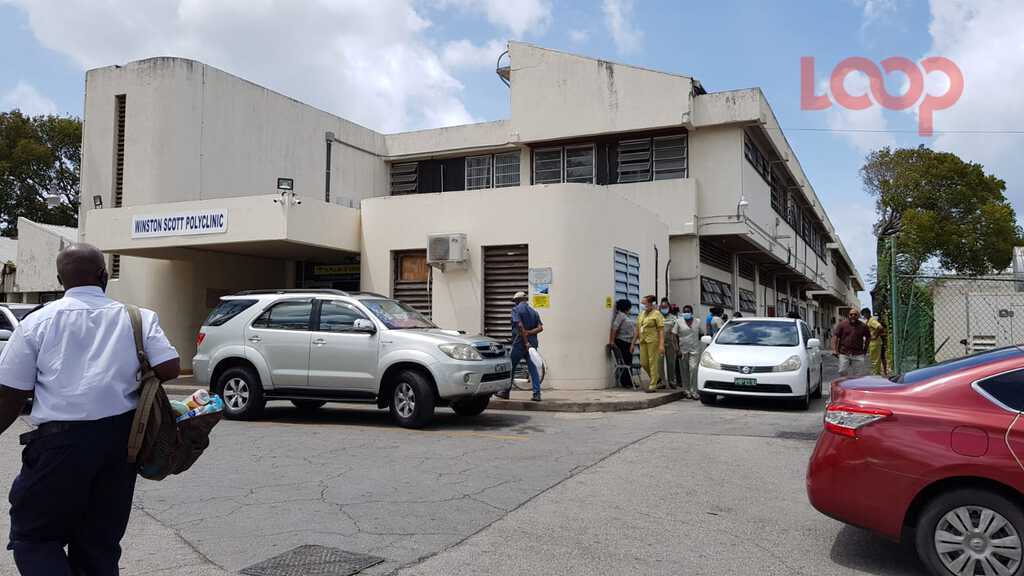 Employees of the Sir Winston Scott Polyclinic walked off the job this morning. Polyclinic workers return to work, unions to meet weekly

Healthcare workers at the various polyclinics across the island were back on the job from this afternoon after a meeting with Prime Minister Mia Mottley and the Ministry of Health and Wellness officials.

The brief industrial action has brought about a new way of business for handling issues in the health sector going forward.

The meeting held at the Lloyd Erskine Sandiford Centre, which was led by the National Union of Public Workers (NUPW), addressed the distribution of personal protective equipment (PPE), sanitizing products and quarantine area at the Geriatric Hospital, as well as the what was believed to be the haphazard appointment of environmental health officers, nurses, and concerns of temporary doctors at polyclinics.

Acting Secretary-General of the NUPW, Delcia Burke informed the media that their issues have been addressed and communicated to the necessary parties.

"The Body recognised that it was a problem of communication more so than things not being done," she said, adding "the meeting discussed the appointment of environmental health officers and nurses at the clinic and it was communicated that these appointments were done and they were effective since May 15 and officers will be communicated to".

In response to today's meeting, the Ministry of Health has decided to hold weekly meetings with the various Unions to discuss the industrial issues of health care workers. Minister Lt Col Jeffrey Bostic contested that better channels of communications were needed amongst the employees.

"If there is one thing certainly [from] the Ministry of Health perspective that we will have to correct is the chains and channels of communication so that all of the information gets down to all persons and [they] are kept in the loop at all times," he said.

The Minister said that this was a most unfortunate time for issues in the sector to come to a head when these healthcare and environmental officials are working round the clock to keep the nation healthy and safe. To demonstrate how important handling and settling these grievances were to the Minister, he said that he exited a World Health Assembly Zoom Meeting to give this his full attention in a speedy fashion.