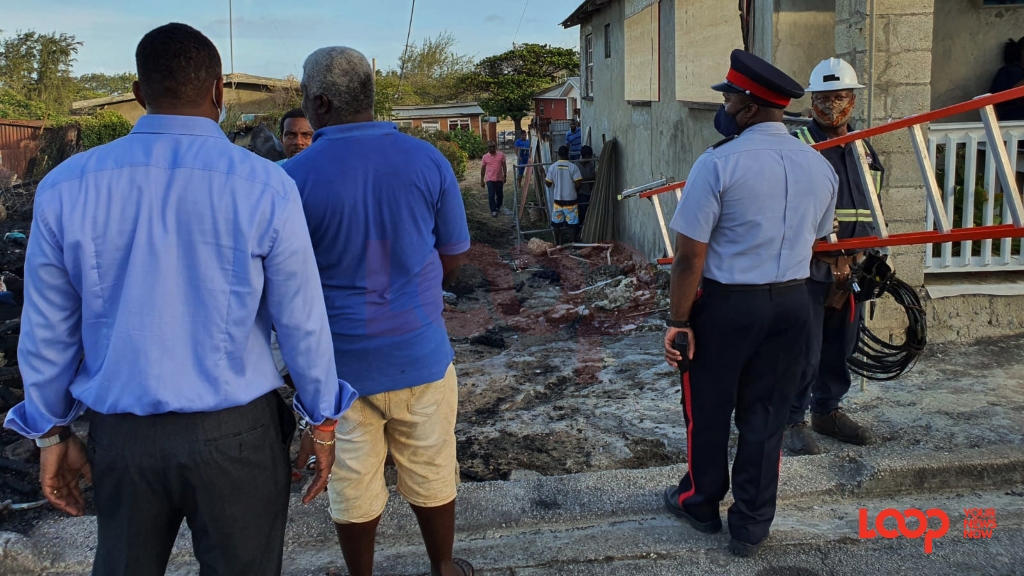 Minister Wilfred Abrahams at the scene with police and fire officers along with Sliver Sands residents and fishermen assisting after the blaze was extinguished.

"I was frightened to shut my eyes last night."

These are the words of the maternal grandmother of the five children who lost their home yesterday. Maureen Daniel, who has her daughter Naria's other daughter living with her, said that the house fire scene kept playing over in her head last night. Daniel lives a couple houses down from her daughter in the same gap in Silver Sands. Naria is one of Maureen's six children.

She said that the family of seven, soon to be eight, were relocated to Ealing Grove temporarily, thanks to the consistency representative Minister Wilfred Abrahams.

Speaking about the tragic incident, Daniel said, "Two or three fire trucks come but... everything went long so fast and she [Naria] had just gone the day in front and get a bottle of gas."

She said that besides the damage to the windows of the houses next door, one home will also need to replace its door.

Asked what items she thinks persons can donate if they wish to assist her daughter's family, she said that they lost everything. "But Naria said she going need fresh things to carry in with the baby," because she is due to deliver her seventh child this month. Daniel said she's not sure how much longer it will be before she goes into labour after the stress of yesterday and how low her daughter's tummy is sitting already, so she needs to be ready to go to the hospital any moment now.

Additionally, she said clothes for the family members especially the children would be appreciated now. "But everything, honestly they just need everything," she reiterated.

Despite losing their home and possessions in a blaze this afternoon, tonight a family of seven* has a new place to rest their heads temporarily.

The uninsured house was owned by Gloria Ashby who resides in Boston in the United States. Living at the residence was her 52-year-old son Ricardo Estwick along with his girlfriend Naria Daniel, 33*, and their four children of varying ages 12, 10, 5, 3 and 1. Daniel is a mother of six* with her seventh child due this month. Estwick also has two other children outside of the union.

Loop News understands that Daniel's father, the children's maternal grandfather was instrumental in the rescue effort during the blaze. He rescued two of the children from inside the wooden home that later was engulfed in flames and destroyed completely. One of the couple's four children was not at home when the fire broke out.

In addition to the devastation caused by the fire, considering COVID-19 and social distancing protocols with Daniel and Estwick having four children including one toddler and an infant, by nightfall, Abrahams told Loop News:

"We were able to find temporary accommodation for the entire family and to ensure that she has supplies.

"We were also able to assist the affected neighbours with some emergency repairs to secure their houses."

Praising his constituents for the roles they played in the quick recovery effort so far, he added: "The neighbours chipped in to help board up the houses that had their windows melted by the fire."

The two homes that were partially damaged during the fire were owned by Sonia Prescod and Damian Waldron. Prescod's home suffered damage to three windows and Waldron's residence had two windows damaged.

Editor's Note: Originally, the police report gave Daniel's age as 35 years old. The ages of the children have also been amended on speaking to Daniel's mother. Daniel is also a mother of six, not five as was previously stated in an earlier edition of this article.