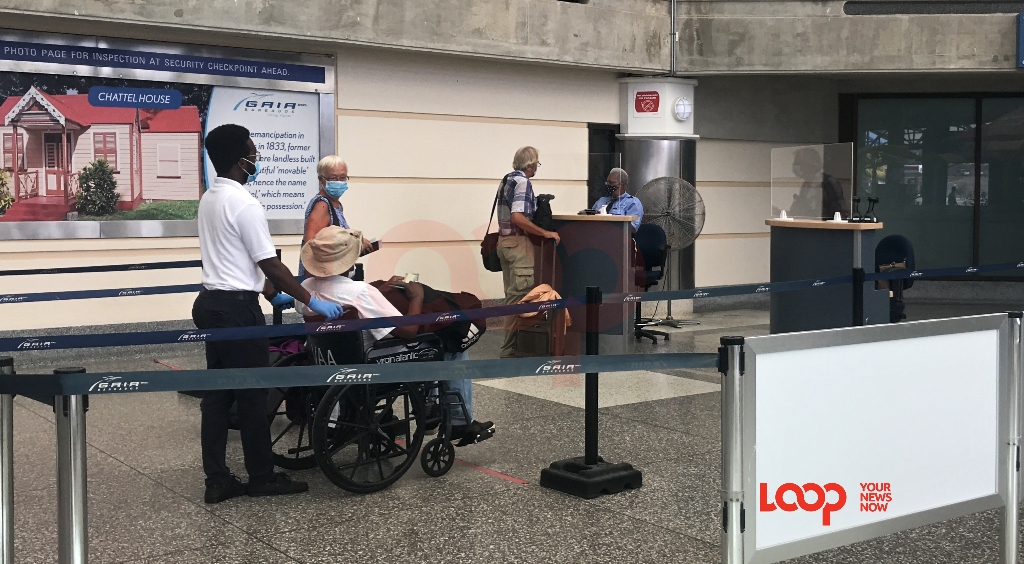 Departing passengers checked at Immigration before entering the Departure Lounge.

"We ain't got nuh corona hear!"

This was yelled from the Barbados Transport Board bus window as passengers who got off of today's repatriation flight between Bridgetown, Barbados and Toronto, Canada, were taken to the four isolation centres around the island.

The 20 or so passengers returned to Barbados on an Air Canada Airbus A320.

The passengers who arrived did not go through Customs as usual but walked down the steps of the plane across the tarmac and went onto the buses which were waiting to transport them.

Each Transport Board bus looked to be carrying between two to six persons.

Six Transport Board buses escorted by the Royal Barbados Police Force and driven by members of the Barbados Defense Force (BDF) took the passengers who had landed at the Grantley Adams International Airport (GAIA) from Canad to their new home for the next fourteen days. The buses departed just before 3 pm.

AC2018 departed Canada around 8.46 am today and landed at the Grantley Adams International Airport around 1.24 pm.

At the airport, some Barbadians who have dual-citizenship with Canada, are studying in Canada, or reside in Canada took advantage of the evacuation flight and returned North. Wearing face coverings, the passengers checked in quickly and sat apart in the Departure lounge demonstrating social distancing unless travelling together. Couples and pairs of travel partners sat together.

"I was calling Air Canada for days. His flight for May 23 was cancelled. Up to now, he has no cancellation notice. He heard the flight was cancelled from another friend. This whole saga started then, four days ago. I called Air Canada when people heard about this flight only to be told it's been cancelled. Then I called back and the people were saying it isn't. I was on hold for one hour and 45 minutes yesterday to confirm the last seat and then she came back and said it full. This morning I called back and was told the flight is on and there is one seat left, one seat in business class for $1,800. He had to pay an extra $1,000 just to get on that flight and get home. He's Barbadian but lives in Canada."

She was not pleased with how the flight was handled.

An Air Canada staff member was one of the last persons to enter Immigration. She told Loop that her flight was scheduled for May 23.

Asked if she was stuck after the lockdown happened and borders were closed, she said, 'No'. She was actually on vacation in Barbados and opted to stay. Responding to the question of how was it quarantining in Barbados, she said, "Much better! The weather is much better here than in Canada."

The Airbus departed Barbados just before 4 pm after it had been cleaned, sanitized and had refuelled.

There were 18 Barbadians nationals in Canada on a work programme organised through the Barbados government with the JW Marriott The Rosseau Muskoka Resort & Spa in Ontario. They have been there since June 2019. In a press statement on May 5, Consul Liaison Service Officer, Ken Mason, speaking from Canada, revealed that his office was working on getting the 18 on a flight scheduled for May 16.

Their contracts will expire at month-end.

Loop confirmed that all of the Barbadian hotel workers who were assigned to the JW Marriott The Rosseau Muskoka Resort & Spa in Ontario through the government programme were not aboard the plane today. However attempts to reach the Minister of Labour Colin Jordan to ascertain how many employees made the flight, if any at all, were futile up to the time of the publishing of this report (9.30 pm, Saturday, May 16).