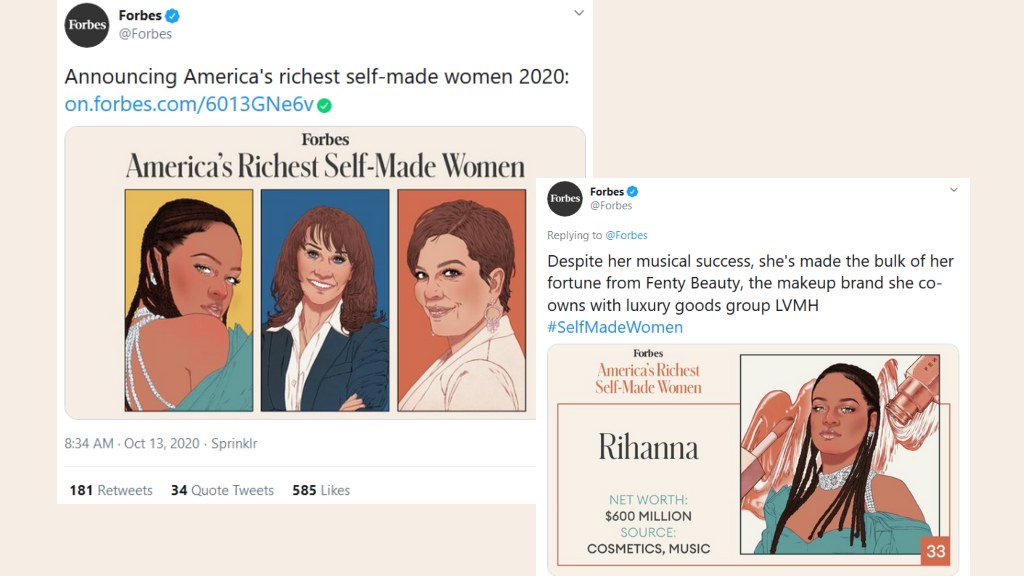 Rihanna has made the list of Forbes Richest Self-Made Women of 2020.

The acrtess, singer, business mogul, entertainer has come in at number 33 on this year's list with Forbes citing her extensive charity work; including upwards of $8 million to COVID-19 relief efforts, over $1 million to New York's needy, $2.1 million to abuse victims in LA, and $5 million to other charities through her Clara Lionel Foundation.

Rihanna even made a donation of ventillators to her homeland Barbados and when COVID-19 forced the closure of schools on the island, just as in the past, Rihanna funded tablets for some of Barbados' students because Education is one of the categories she pours funds into philanthropically.

Despite her musical success, she's made the bulk of her fortune from Fenty Beauty, the makeup brand she co-owns with luxury goods group LVMH #SelfMadeWomen pic.twitter.com/4JuA1xJL2v

Forbes also highlighted that along with her musical success, Rihanna has raked it a huge portion of her earnings and worth from her makeup line Fenty Beauty and her co-ownership of the Savage X Fenty lingerie line. In 2020, Rihanna also dropped Fenty SKIN, her new skin care line that's for all genders and skin types.

Number one for the third year in a row is roofing entrepreneur Diane Hendricks, who co-founded ABC Supply and is worth $8 billion.

In its sixth edition, the annual list looks to spotlight the 100 richest self-made entrepreneurs, executives, and entertainers in the US this year which is a marked increased from 80 women on last year's list.

The estimated collective worth of all the women comes in at $90 billion with women ranging in ages from 23 up to 94 and covering a variety of professions.

Some of the other notable women on the list are Oprah Winfrey, Kim Kardashian West, and Madonna.