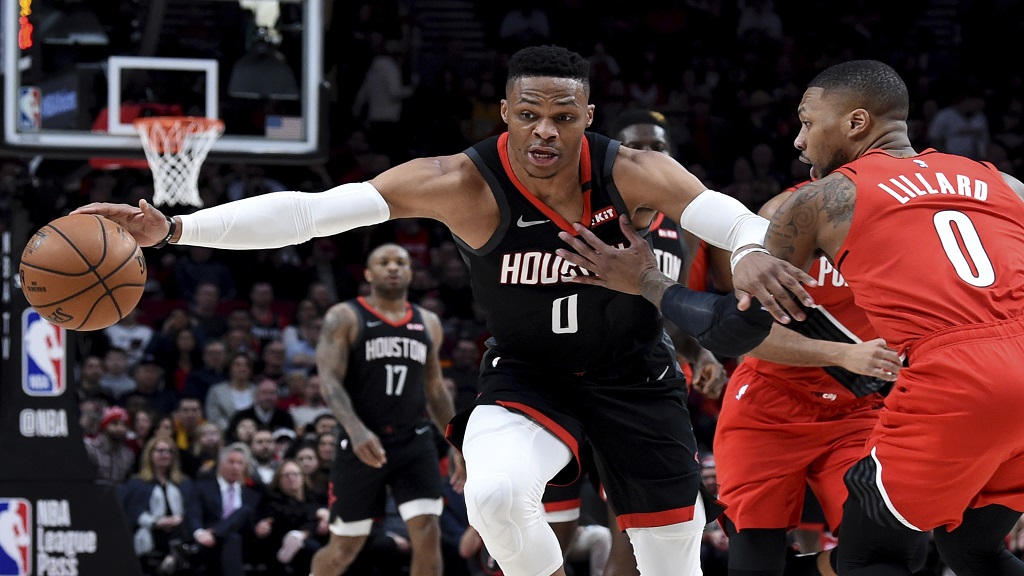 Houston's Russell Westbrook hasn't made it to the NBA restart yet.

The coronavirus did — but health protocols seemed to work as the league and its players hoped they would.

But neither of those positive players ever made it out of quarantine, so neither entered the so-called bubble and could mingle freely with other players, coaches and staff. The NBA said both players, neither of whom were identified, “have since left the Campus to isolate at home or in isolation housing.” They could rejoin their teams later.

“Our protocols are unbelievable,” said Toronto Raptors guard Kyle Lowry, one of the players who helped craft the restart rules. “I think our protocols and our health and safety measures have been top-notch. I think this thing will work perfectly. ... We’re doing everything that we can possibly do to make sure that we’re healthy, we’re safe and we’re in an environment where we can be successful and do our jobs at a high level.”

It’s unclear when Westbrook will arrive. As recently as Sunday, the Rockets believed that Westbrook, NBA scoring leader James Harden and newly re-acquired Luc Mbah a Moute — none of the three traveled with the team to Walt Disney World near Orlando last week — would be with the team in the next few days.

In Westbrook’s case, that now seems most unlikely.

“I tested positive for COVID-19 prior to my team's departure to Orlando,” Westbrook wrote on is social media channels. “I’m currently feeling well, quarantined, and looking forward to rejoining my teammates when I am cleared.”

The arrival dates for Harden and Mbah a Moute are murky as well. Neither player has revealed why they aren't at Disney, and Rockets coach Mike D’Antoni would only say that “these are things that people are dealing with.”

D'Antoni said Westbrook had taken part in individual workouts when they were permitted back in Houston but declined to elaborate further on the guard's condition. He also isn't sure when the missing Rockets will arrive.

“I did have one year of pre-med," D'Antoni said. “But I don't know when it's going to happen. As soon as protocols get out of the way ... they're all anxious to get here and they're doing what they need to do to stay in shape.

Westbrook is averaging 27.5 points, eight rebounds and seven assists per game for the Rockets this season. Houston have clinched a playoff spot and resume their season with the first of eight seeding games on July 31 against Dallas.

“I’m praying for his safety and the same for his family,” Phoenix guard Devin Booker said. “Hopefully he can get healthy and get down here as soon as possible.”

The league also said Monday that 19 players newly tested positive since July 1 during in-market testing, meaning tests done before teams began arriving at Disney on July 7. Upon arrival at Disney, 322 players were tested with the two positives.

“All we can do is try to stay optimistic about it and positive, and hopefully we can finish this season," said Los Angeles Clippers forward Kawhi Leonard, the reigning NBA Finals MVP.

Inside the NBA bubble, however, there was optimism that the rules established by the league and the players will work — even though some Disney parks reopened to visitors over the weekend and the MLS restart, also at the campus, has seen two teams leave after a spate of positive tests.

“It’s a condition, a virus, that does not discriminate,” Phoenix coach Monty Williams said. “And we’re trying to do everything we can to keep our guys safe.”

Those protocols that Lowry spoke of were designed to be taken seriously, and at least two players inside the NBA bubble have already paid a steep price for violating quarantine upon their teams’ respective arrivals last week.

Sacramento's Richaun Holmes revealed Monday that he “briefly and accidentally” crossed the NBA campus line to pick up a food delivery. Under the NBA’s rules of the restart, he now has to spend 10 days in quarantine.

Holmes said he had eight days left in quarantine.

“I apologise for my actions and look forward to rejoining my teammates for our playoff push,” Holmes wrote.

Also Monday, a person with knowledge of the situation said that Houston’s Bruno Caboclo was also serving a 10-day quarantine for crossing the campus line. Like Holmes, Caboclo also had eight days remaining Monday, according to the person who spoke to The Associated Press on condition of anonymity because the Rockets have not announced the sanction.

Monday’s developments came on a day where more than 12,000 new cases were confirmed in Florida, now perhaps the hottest of virus hotspots in the U.S. And officials in Houston also called for that city to lock back down as area hospitals strain to accommodate patients sick with COVID-19.