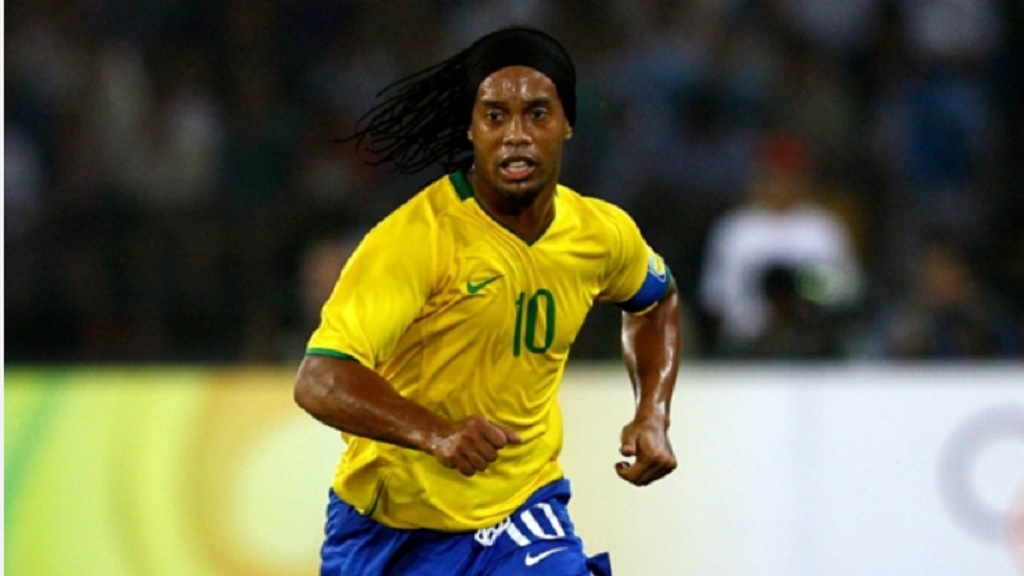 In a rush to venerate Pele, the relaunched New York Cosmos announced in 2013 they would be retiring the team's number 10 shirt.

The only trouble with such a tribute was that in 1977 they had already retired the jersey, so the bootlicking gesture fell rather flat.

When it comes to Brazil, for whom Pele also wore number 10, there has never been a question of standing down that number.

Rather than ceremonially wave goodbye to such a historic emblem, the 10 emblazoned across the back of yellow and green speaks of supreme South American cachet.

Ronaldinho, who turns 40 on Saturday, wore those colours and often that number with distinction across an international career that spanned almost 15 years.

Here is an attempt to rank Brazil's greatest number 10 heroes.

When it comes to iconic figures in Brazil, you start at Pele and work down. Pele before Ronaldo, Pele before Ayrton Senna, Pele before even Rio's Christ the Redeemer statue.

A three-time World Cup winner, Pele scored over 1,000 goals across his career - a haul that to this day sparks fiery debate. There is often the argument that a player cannot be bigger than his club, yet in the case of Pele and Santos that theory can be debunked. John Lennon once claimed The Beatles were bigger than Jesus, but Pele was bigger still than The Beatles. He joined the Cosmos in the twilight of his career and was feted in the United States, where football previously held little sway.

Alex Ferguson once described Wayne Rooney as "the white Pele", but that description better suits Zico, talisman of the Brazil team that flirted with greatness but fell agonisingly short. The Rio-born attacking midfielder is held in reverence by those that remember him weaving his magic for the Selecao and particularly Flamengo at club level, for whom he scored over 400 goals. A free-kick master, Zico also had successful spells at Udinese and Kashima Antlers and featured consistently highly in a string of polls assessing the best players of the 21st century. He deserved a World Cup triumph but never got one.

Rivaldo forever tainted his legacy with shameful play-acting against Turkey at the 2002 World Cup. To "do a Rivaldo" ought to mean accomplishing a spectacular piece of skill, yet to a certain generation it will always mean flinging oneself down and feigning injury. Still, what a player he was. Better with Barcelona than with his national team, it might be argued, after five dazzling years at Camp Nou. Rivaldo was outshone by Ronaldo during Brazil's 2002 World Cup triumph, and he had perhaps just hit the downward slope of his career at that point. But watch his 2001 hat-trick for Barcelona against Valencia that earned his team a Champions League place and be wowed, and 35 goals from 74 Brazil caps isn't half bad.

Happy birthday fella. Back in the days when his quick feet were a passport to wealth and glory, and long before his passport was a passport to prison yard kickabouts, Ronaldinho was a whirligig of a footballer, a player for whom slow-mo replays might have been designed. His trickery could be deceptive on the eye, but they knew at Paris Saint-Germain and they knew at Barcelona that a genius lurked in their midst. He shone at the 2002 World Cup – number 11 back then to Rivaldo's number 10 – and was twice a FIFA World Player of the Year. He loved partying, maybe a little too much, but Ronaldinho was never one for restraint, on or off the pitch.

If that name sounds familiar, it might be because Brazil's president Jair Bolsonaro was named after this star of a long-bygone Brazilian era. Jair, an outstanding inside-forward of the day, had not only the number 10 on the back of his shirt in the 1950 World Cup title decider, but the weight of a nation's expectations too. The tournament format was unusual that year, but it came down to a round-robin finale between hosts Brazil and South American rivals Uruguay, who defied all expectation to snatch a 2-1 win. Jair reputedly said: "I'll take that loss to my grave." He scored bundles of goals for the likes of Vasco da Gama, Flamengo, Palmeiras and Santos, and died aged 84 in 2005.

Neymar stands every chance of climbing this list. The Paris Saint-Germain and former Barcelona forward has over 100 caps and 61 goals for his country, and the 28-year-old perhaps suffers from comparisons to the likes of Lionel Messi and Cristiano Ronaldo. Greatness beckons and is within touching distance.

Diego Maradona once described Rivelino as "one of the best ever", and the Brazilian's influence on Argentina's greatest player has always been clear. A left-footed attacking midfielder, Rivelino had magnetic close control and found routes to slalom through defences that looked impassible. He is widely credited with perfecting, if not inventing, the 'flip flap' motion designed to wrong-foot and leave defenders standing, Rivelino's mastery of that technique a clear influence of future Brazil greats including Ronaldo and Ronaldinho. He was Brazil's number 11 at the 1970 World Cup – Pele being the 10 – but then had the shirt every samba star would want for the '74 and '78 finals.

Sorry, who's this guy? If the name is unfamiliar, then now is enlightenment time. Marta finished ahead of Mia Hamm in a 2016 Guardian poll of experts to judge the greatest female footballer of all time. A sumptuously gifted forward, she has scored a record 17 World Cup goals and been voted FIFA's best female player six times. Her dribbling is a delight, her finishing nerveless.

Last seen playing five-a-side as a publicity stunt in London, Kaka's star shone brightest in his Milan years, with a six-year San Siro spell from 2003 to 2009 seeing the attacking midfielder dazzle in Serie A and the Champions League. Four years at Real Madrid followed and he had spells towards the end of his playing life with Sao Paulo, also turning out for Orlando City in MLS. The deeply religious player won 92 caps for Brazil, scoring 29 times, and was a World Cup winner in 2002, albeit playing just 25 minutes against Costa Rica. That was in the infancy of his Brazil career, and despite his blossoming in later years, being far more involved in the 2006 and 2010 tournaments, it was his lone World Cup triumph.

Not the Italian public broadcaster but the former Paris Saint-Germain star, who pipped the likes of Leonardo and Juninho to make this list. Rai was a fine player who nevertheless would have been forgiven for having mixed emotions when Brazil won the 1994 World Cup. He began the tournament as captain but handed the armband over to Dunga midway through after being dropped. He was benched for the final and stayed there, with Dunga the man who lifted the trophy. In a Guardian interview in 2008, Rai reflected: "It wasn't my best moment, but the win was beautiful – Brazil's first for 24 years. It was very important for us as a people."

Pele on the mend - I'm ready to play again!