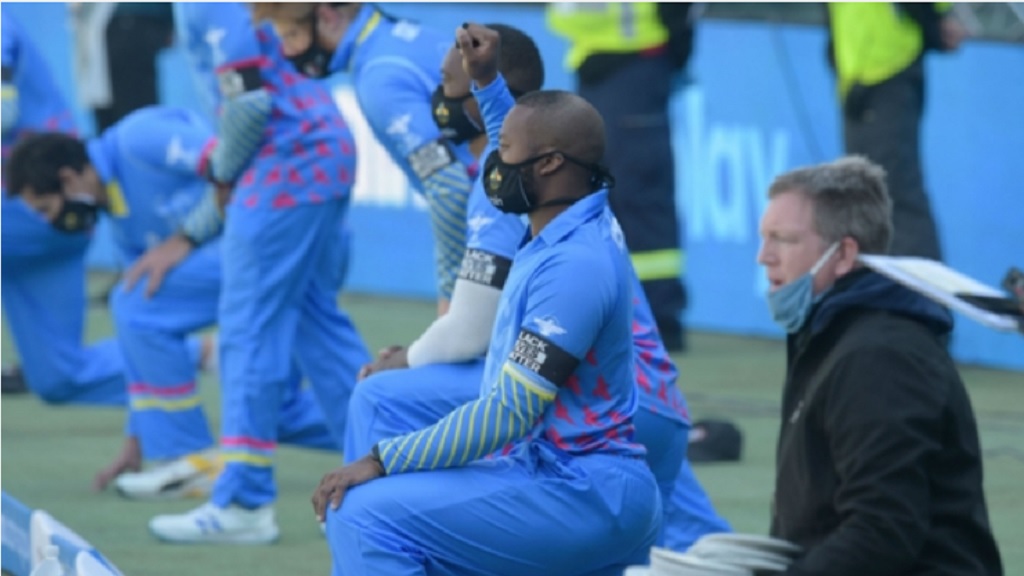 South Africa's Lungi Ngidi took a knee at the 3TC match in July.

South Africa will not take a knee in support of the Black Lives Matter movement during their limited-overs series against England, head coach Mark Boucher has confirmed.

The Proteas will be in action for the first time since March when they host England in three Twenty20 matches and a trio of ODIs from November 27.

South Africa's elite cricketers wore Black Lives Matter armbands and took a knee prior to a 36-over charity match branded 3TeamCricket in July – the first live game in the country after the sport was placed on hold amid the COVID-19 pandemic.

Flags will fly at half-mast during the opening T20 at Newlands and the second match at Boland Park to coincide with five days of national mourning for victims of COVID-19 from November 25 to 29 declared by South Africa president Cyril Ramaphosa.

Boucher said the Proteas will not take a knee versus England because they hope to aid the fight against racism through lived experience instead of such gestures.

"I have spoken to the guy [Lungi Ngidi] who was driving the whole movement within our set-up, he is pretty happy that we have done what we needed to do, in particular at that [3TC] game," said Boucher.

"There are a couple of other issues that our president has raised going forward with regards to gender-based violence and the victims of COVID. We are going to be addressing this with the team so if there is a black armband to wear, we will probably be wearing it because of the president's call.

"It's an ongoing thing for us. It's not something that we have to continue to show, it's something that you have to live. That is exactly what we are trying to do in our dressing room at the moment with a big squad.

"If the guys who brought it up are happy with it, that's great, but if they feel we have to do more, that will be a chat and they are open to express their opinions.

"Our new value system is about respect, empathy, and belonging and all of those lead to an environment where guys feel free and open to talk about these hard issues.

"They've certainly got the support and respect and empathy from every other player."

Cricket South Africa confirmed on Wednesday that three members of the squad were self-isolating after a player tested positive for COVID-19 prior to entering a bio-secure environment in Cape Town.