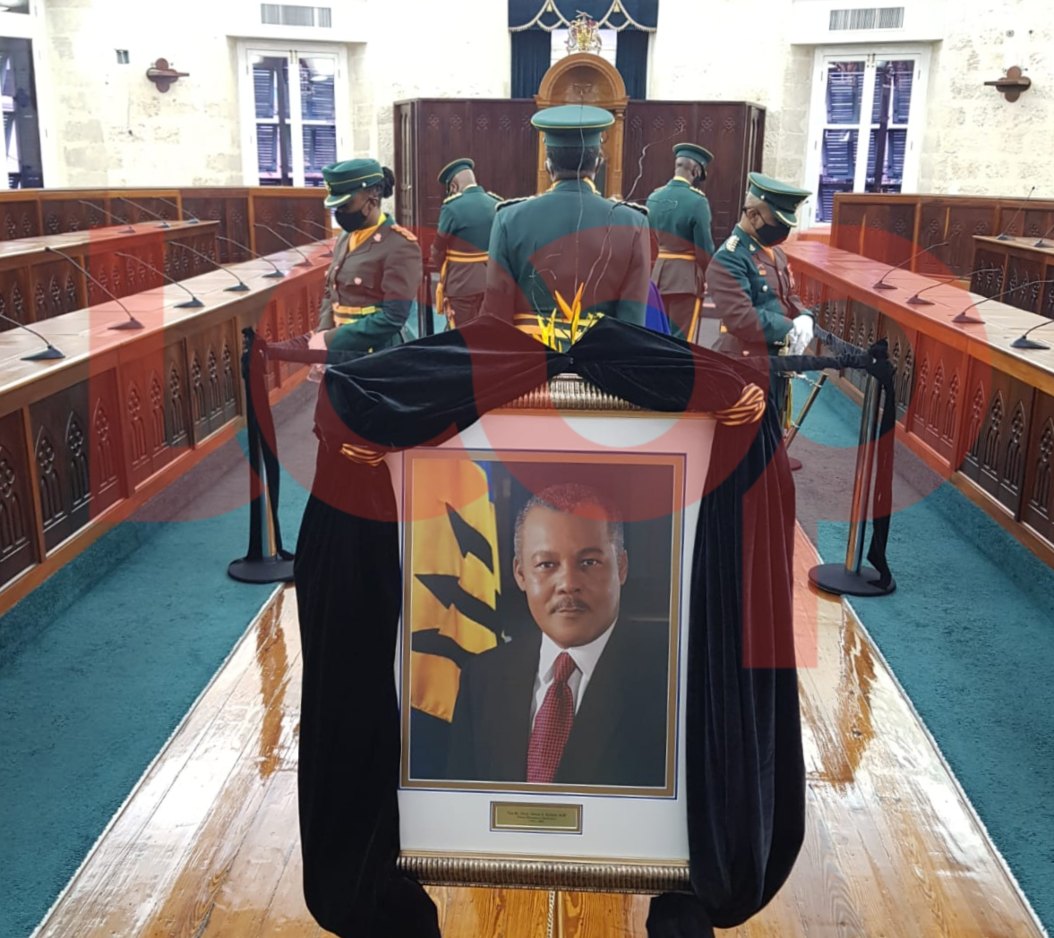 Viewing for the late prime minister was held at Parliament earlier this week. (Photo: Cowyn Franklyn)

The funeral service for former Prime Minister Owen Arthur is open to all Friday afternoon.

Ministerial Coordinator for the State Funeral, Colin Jordan, made it clear during the final press briefing ahead of the funeral service.

Jordan, who is also the Minister of Labour and Social Partnership Relations, told the media that all Barbadians are invited to come out to pay their last respects, support the family, and be a part of a significant occasion.

He continued: “I was at the church this morning [Thursday] and we have seen the tents being set up. Based on the numbers that we believe that can be accommodated under the tents, I am pretty sure that there will be some provision for a few probably to sit, but for sure, there will be space that persons will be able to stand.”

At the burial site at Mount Pleasant Memorial Gardens, Pleasant Hall, in the same parish, the ministerial coordinator said there is provision for persons to view at the southern and eastern sections of the expansive grounds.

He urged the public to obey the direction of ushers who will be monitoring the numbers on the church grounds, and once capacity there has been reached, to view the service at the satellite location in the Speightstown Esplanade, opposite the church.

In the event of rain before the procession leaves Battaleys, the minister said the gun carriage would not be used to transport the body into the church and the procession would continue with the hearse.

If the rain falls after the procession has left, the transfer of the body from the gun carriage to the rear of the hearse would take place.

Jordan said the procession from the church to Mount Pleasant, except for the marching by the troop from Mile-and-a-Quarter, would be in vehicles, and the rain would not be a challenge.

So far, representatives from St Lucia and St Vincent have been confirmed to attend the funeral.

According to Minister Jordan, the cortege will leave Lyndhurst Funeral Home at noon on Friday, August 14, and make a one-minute stop at the South Gate of Parliament Buildings, where the late Prime Minister spent 35 years representing the interests of St Peter. There will also be a one-minute stop at his childhood home in Benn Hill.

Prime Minister Mia Amor Mottley and members of Cabinet will join the procession outside of the Alexandra School, while students from All Saints Primary School, Coleridge and Parry School, Harrison College, the Samuel Jackman Prescod Institute of Technology, the Barbados Community College and the University of the West Indies will line the route between Alexandra School and Fisherman’s Pub.

Students from Elliot Belgrave Primary, Roland Edwards Primary, The Alexandra School, and Parish Ambassadors, will also be lining the street in Speightstown.

Members of the Barbados Cadet Corps will also line the route from All Saints Primary School to the entrance of Mount Pleasant Memorial Gardens.

TS Zeta gaining strength, forecast to become a hurricane in a day or 2