Sunday's Emmys is about winners, politics, a cheeky Colbert 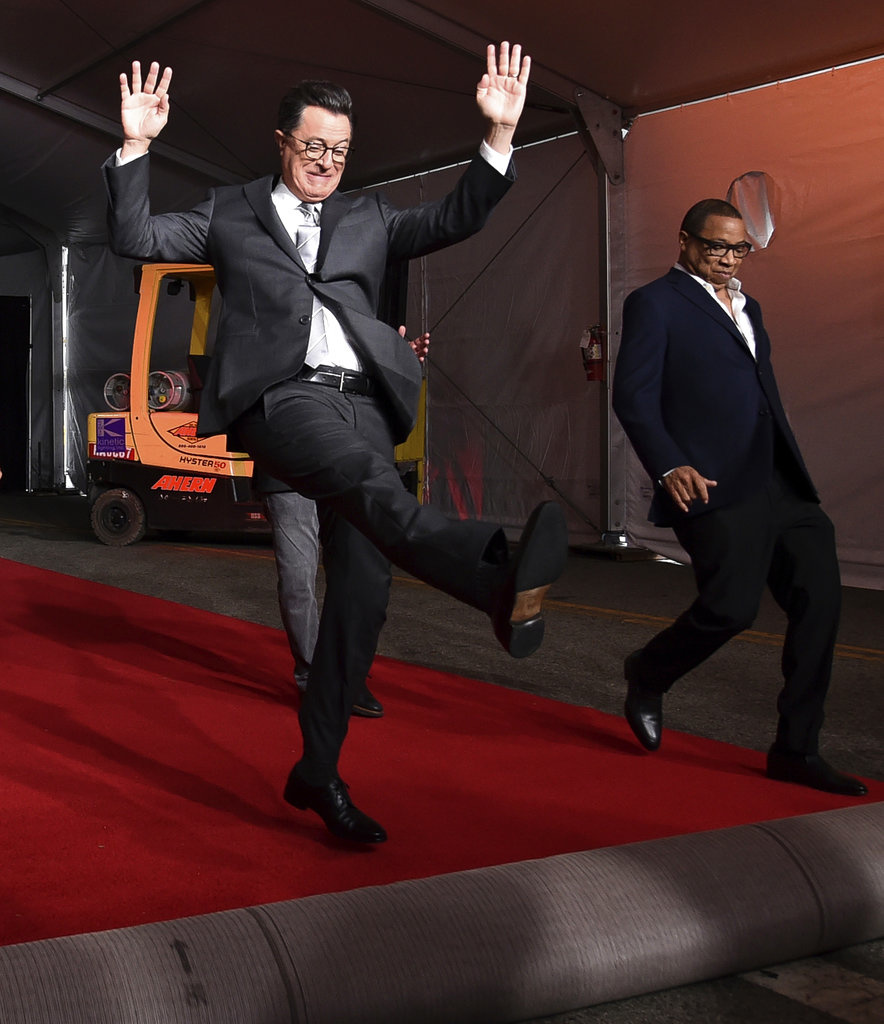 n this Tuesday, Sept. 12, 2017, file photo, Stephen Colbert, left, and Hayma Washington participate in the 2017 Primetime Emmy Red Carpet Rollout at the Microsoft Theater in Los Angeles. The Emmys will be held on Sunday. (Photo by Richard Shotwell/Invision/AP, File)

The 69th prime-time Emmy ceremony will be about winners and losers and more, including politics and a cheeky turn by host Stephen Colbert.

Colbert, whose "Late Show" is a regular forum on the Trump administration, said that the president is fair game during the awards show airing at 8 p.m. EDT Sunday on CBS.

The Emmys are a celebration of TV, "and the biggest television star of the last year was Donald Trump," Colbert said at last week's ceremonial red-carpet rollout outside Los Angeles' Microsoft Theater. He's also claimed that his nude rear — or part of it, suitably tanned — will be included in the opening musical number.

How will winners and presenters approach the evening? Will they weigh in with political jokes or speeches, or could the recent devastating hurricanes that ravaged parts of Texas and Florida prompt moments that avoid divisiveness, at least for the show's three or so hours?

The honors themselves could make a statement. In the drama category, the nominees include polar opposites "This Is Us," a heartfelt family drama, and the dystopian "The Handmaid's Tale," which some observers have called a reflection of our time.

A victory by NBC's "This Is Us," the first network drama series to be nominated since CBS' "The Good Wife" in 2011, would prove that broadcasters can compete with the more adventurous premium cable and streaming platforms that target niche audiences. No network series has won in the category since "24" in 2006.

With previous two-time winner "Game of Thrones" absent because it fell outside the eligibility window, "This Is Us" and "The Handmaid's Tale" are among an unprecedented number of newcomers that include "The Crown," ''Stranger Things" and "Westworld." Repeat contenders "Better Call Saul" and "House of Cards" round out the field.

Among comedy nominees, the political satire "Veep" is a favored again after two consecutive wins, and its star Julia Louis-Dreyfus is considered equally if not more likely to claim the best comedy actress trophy for the sixth time for her role. Combined with Emmys she's won for "Seinfeld" and "New Adventures of Old Christine," that would tie her with Cloris Leachman as the most-winning Emmy performer ever.

"Veep" is competing with "Atlanta"; "black-ish,"; "Master of None"; "Silicon Valley"; "Unbreakable Kimmy Schmidt" and "Modern Family," which, with five previous wins in the category, is tied with "Frasier" for most top-series awards ever.

It could be a big night for African-American performers. There are a record 12 black actors competing for lead or supporting honors in continuing comedy and drama series, including "Atlanta" creator and star Donald Glover. But no Latinos and only one Asian-American — "Master of None" star and co-creator Aziz Ansari — were nominated.

Hip-hop stars, from Chance to Snoop to Common, get Emmy love

Here are some of TV's highest-paid stars