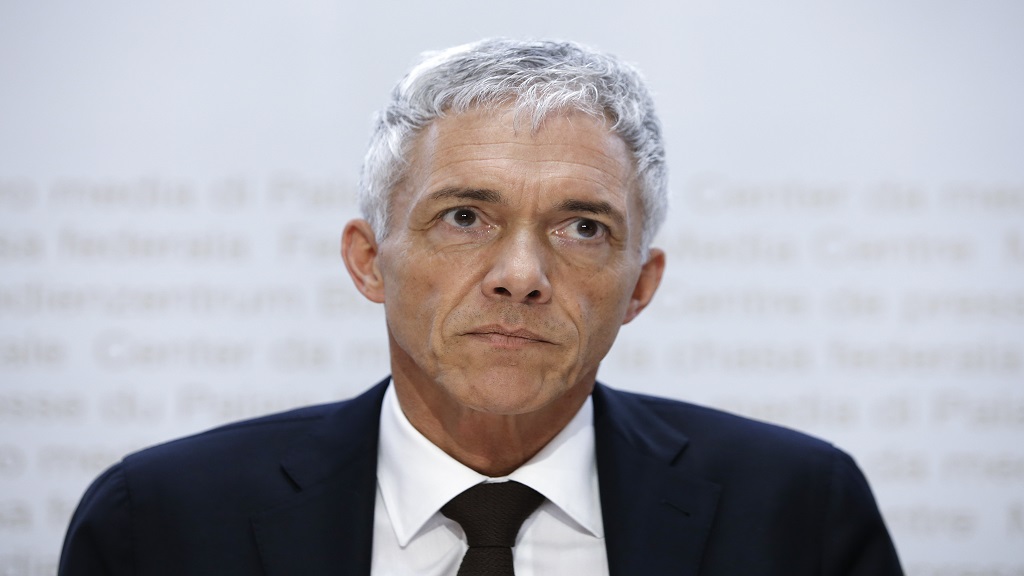 In this Friday, May 10, 2019 file photo, Swiss Federal Attorney Michael Lauber watches during a media conference at the Media Centre of the Federal Parliament in Bern, Switzerland. (Peter Klaunzer/Keystone via AP).

Swiss attorney general Michael Lauber offered to resign Friday minutes before a federal court upheld allegations he lied about a meeting he had with FIFA president Gianni Infantino during a sprawling investigation into football corruption.

Lauber offered his resignation to the parliamentary judicial commission about 25 minutes ahead of the publication of a federal court ruling in his appeal against being disciplined in March for misconduct.

He continued to dispute the allegation that he lied.

“However, the fact that I am not believed as the attorney general is detrimental to the federal prosecution office,” Lauber said in a statement ahead of the ruling.

The internal disciplinary case against Lauber focused on a meeting he had with Infantino in June 2017 at a hotel in Bern at which the prosecutor took no notes.

Lauber and Infantino both later said they could not recall their discussion at what was their third meeting in a 15-month period.

“On the basis of general life experience, such a case of collective amnesia is an aberration,” the federal court ruling said.

FIFA said Friday in a statement “there couldn’t be a better proof of good faith than to meet the prosecutor in order to collaborate with criminal investigations.”

The statement did not address the Swiss court's skepticism about a failure to recall details of the meeting in June 2017.

The attorney general's office said it would not comment beyond Lauber's brief statement. Swiss media reported the resignation as a formality, with public broadcaster RTS saying the judicial commission would accept it.

Lauber is set to join former FIFA president Sepp Blatter and former UEFA president Michel Platini as senior officials in Switzerland who lost their jobs because of an investigation that began in November 2014.

At that time, FIFA filed a criminal complaint about suspected money laundering in the 2018 and 2022 World Cup bidding campaigns won by Russia and Qatar, respectively.

More than five years after the first criminal proceedings were opened, Swiss authorities have secured no convictions and the one criminal trial so far collapsed in April.

Focus turned on Lauber in November 2018 when he acknowledged two undeclared meetings he had in 2016 with the recently elected Infantino after they were reported in the Football Leaks series of confidential documents.

Within weeks, Lauber called a news conference and said the first two meetings with Infantino were justifiable exchanges with FIFA’s new leader about long-running investigations affecting the football body.

Lauber had “intentionally made a false statement” to the supervisory panel when first asked about the meetings in 2018 “and knowingly concealed the third meeting with FIFA president Infantino,” the federal ruling said Friday.

That third meeting, held in June 2017, remained secret until it was reported last year by Swiss media. A formal investigation was opened by an oversight panel supervising the federal prosecution office.

The ruling partially upheld Lauber's complaint that he was denied access to some documents during the disciplinary process, while confirming other findings of the prosecutor's misconduct.

The scrutiny of Lauber's role in the football investigation led to him being recused last year by Switzerland’s federal criminal court.

In the wider case, at least 25 criminal proceedings have been opened, with targets including Blatter and his one-time protege Platini. They have not been charged and deny wrongdoing.

Charges have been brought against former FIFA secretary general Jerome Valcke and Qatari football and television executive Nasser al-Khelaifi, who is the president of Paris Saint-Germain and a member of the UEFA executive committee. They deny wrongdoing and a trial is scheduled to open in September.

After a separate series of criminal complaints filed by people who were not identified, a special prosecutor was appointed this month to look at the Lauber-Infantino meetings.

Infantino has described those complaints as “quite absurd.”

FIFA expects to get evidence in May of Russian doping cases