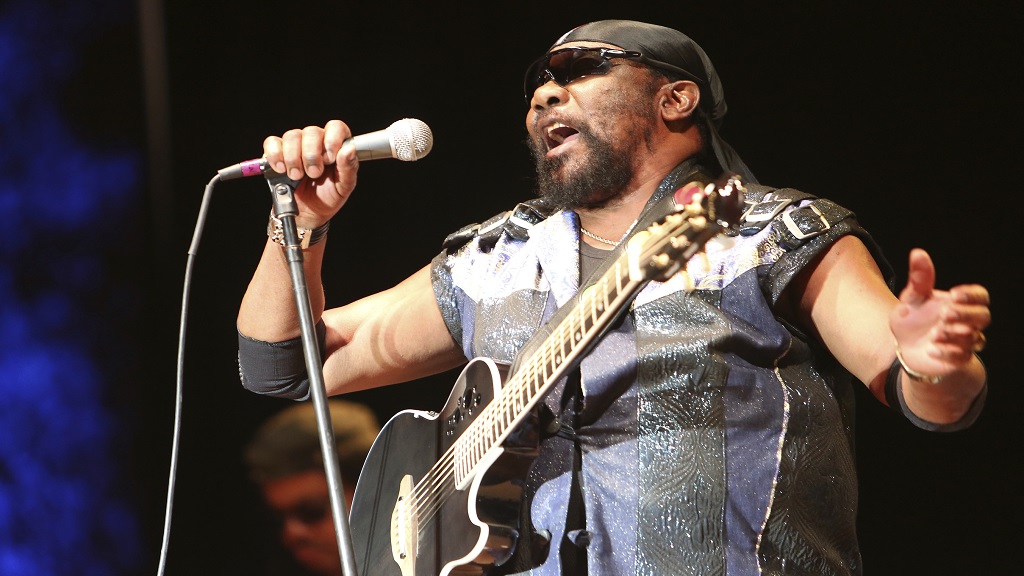 In this July 13, 2019 file photo, Toots Hibbert performs with the Maytals in Grass Valley, California. (Elias Funez/The Union via AP)

Frederick Nathaniel "Toots" Hibbert, the legendary ska and roots reggae singer who thrilled generations of music lovers, died at 10:35 pm on Friday. He was 77.

The entertainer had been in a medically-induced coma at the Tony Thwaites Wing of the UHWI for over a week when he passed away.

"I did my best," a distraught Cabel Stephenson, manager of the late singer, told Loop News.

"We have lost our general but his words and works will live on until the end of creation, it will never be removed."

Stephenson recalled a nightmarish scenario which began two weeks ago when the singer fell ill, and began to undergo treatment for respiratory complications.

"When I realized he was sick, we sent a doctor to check him at his home, and the doctor had to move him immediately to a private hospital. He was at the private hospital recuperating when he developed complications in the wee hours of the morning. When the doctors couldn't get him into an intensive care unit, I called Minister Grange at 2am to save him, she answered the call and helped me to get him facilitated at the UHWI," he recalled

Stephenson said every conceivable medical effort was made to save the iconic singer's life.

"We called UHWI but there was no space, then several other  facilities, and then called back the UHWI and appealed to the doctor in charge who finally told me to bring him. Dr Shernett Bryan got him immediately to UHWI. The doctors have done their best and the end result is what it is ...when men on earth have done their best, rest assured that the Lord God Almighty will do the rest, I cannot question anything," he said resignedly.

He thanked the dedicated medical staff who worked around the clock to provide care and diligence.

"I would like to thank the medical staff at UHWI, and Minister Grange who was very supportive at those critical moments. There are many things to say, there are many things not to say, so I will have nothing more to say at this time," Stephenson said.

So sad to hear of Toots Hibbert’s passing. When I first heard Pressure Drop that was a big moment - he had such a powerful voice and on stage he always gave the audience his total energy. A sad loss to the music world.

In the meantime, tributes are pouring in for the late music icon.

Clifton "Jackie" Jackson, legendary Jamaican bass player who won a Grammy Award as a member of Toots and the Maytals for Best Reggae Album, summed it up succinctly when he said:  "it is the end of an era".

"It is a sad day for reggae music and all entertainers. He was just 77, this was supposed to be the year of the Maytals, we had our first album in 10 years, we were supposed to be in England for four to five weeks, return to Jamaica, then head to Europe for six weeks, return to Jamaica, and then six weeks in the US. But everything changed with COVID...it just goes to show you that we may think we have time, and we don't do nothing yet, but when God says you have to come home, you have to come home," Jackson said.

"I can't adequately express how much this hurts. Toots was a product of the West Kingston cultural movement and I have known him for decades. I remained very optimistic that he would pull through but it didn't end that way. I am praying and sending thoughts of hope and strength to his wife and family. Jamaica is grateful for his life and work and the contribution he made to the development of reggae music," she said.

The minister added: "Just recently, he participated in the Festival Song Competition of which he was the first winner in 1966. It was a demonstration of his commitment to Jamaica. Toots was well loved across the music world and his wonderful character and vocal abilities will be missed. I will continue to support the family as they go through this difficult time."

Celebrated broadcast journalist Anthony Miller said: "I saw him as a kind of reggae superhero who'd always be around, in sleeveless shirts and flashing that trademark smile. But then came COVID. Rated the musician but was fonder of the man...hard pressed to think of someone in the music business I liked and respected more....that voice, those moves, the uniqueness of his talent...can't stop crying."

Mick Jagger, founding member of the Rolling Stones, wrote on Instagram: "So sad to hear of Toots Hibbert's passing. When I first heard Pressure Drop, that was a big moment - he had such a powerful voice and on stage, he always gave the audience his total energy. A sad loss to the music world."

Entertainers Ziggy Marley and Third World were also among those paying tributes, which flooded social media on Saturday morning.

The Legendary Toots Hibbert has passed i spoke with him a few weeks ago told him how much i loved him and what he means to me, we laughed and shared our mutual respect . i am fully in sorrow tonight i will miss his smile and laughter his genuine nature @tootsmaytalsofficial was a father figure to me his spirit is with us his music fills us with his energy i will never forget him. #foundingfather RIP TO THE MIGHTY AND POWERFUL NYAH FYAH BALL ❤️💚💛. JAH RASTAFAR I 😢😢😢

Marley described Toots as a "father figure" to him and said the pair spoke a few weeks before Hibbert's death.

"I am fully in sorrow tonight, I will miss his smile and laughter, his genuine nature," Marley, the eldest son of reggae legend Bob Marley, wrote on Instagram.

In a Twitter statement, Trojan Records, the reggae label that released albums by Toots And The Maytals, said, “We are so sad to hear of the passing of Toots. A true pioneer who changed lives and brought so much joy through his music. We have lost a true legend. Your music will live on forever Fredrick Nathaniel ‘Toots’ Hibbert.”

Toots rose to fame in the 1960s and early 70s, topping the charts with an incredible run of hits such as 'Monkey Man', '54-46', 'Sweet and Dandy', and 'Pressure Drop', laced with the sweet gospel-tinged harmonies that propelled them to stardom. He gave the world 'Bam Bam', with an infectious melody that has been interpolated by Lauryn Hill, Kanye West and others. Sister Nancy's 1974 version of 'Bam Bam' on the  instrumental  Stalag 14 is easily one of the most-sampled reggae tracks in history.

Toots is credited as one of the first persons to use the term reggae to describe the genre of music that emerged in the 1960s and elevated Jamaican music to world acclaim.

Toots and the Maytals won the Reggae Grammy Award in 2005 for the album ‘True Love’.

On August 28, he released his latest album, 'Got To Be Tough,' on the Trojan Jamaica label.

He was awarded the Order of Jamaica in 2012.

WATCH: They're 'jammin' for Bob Marley 75