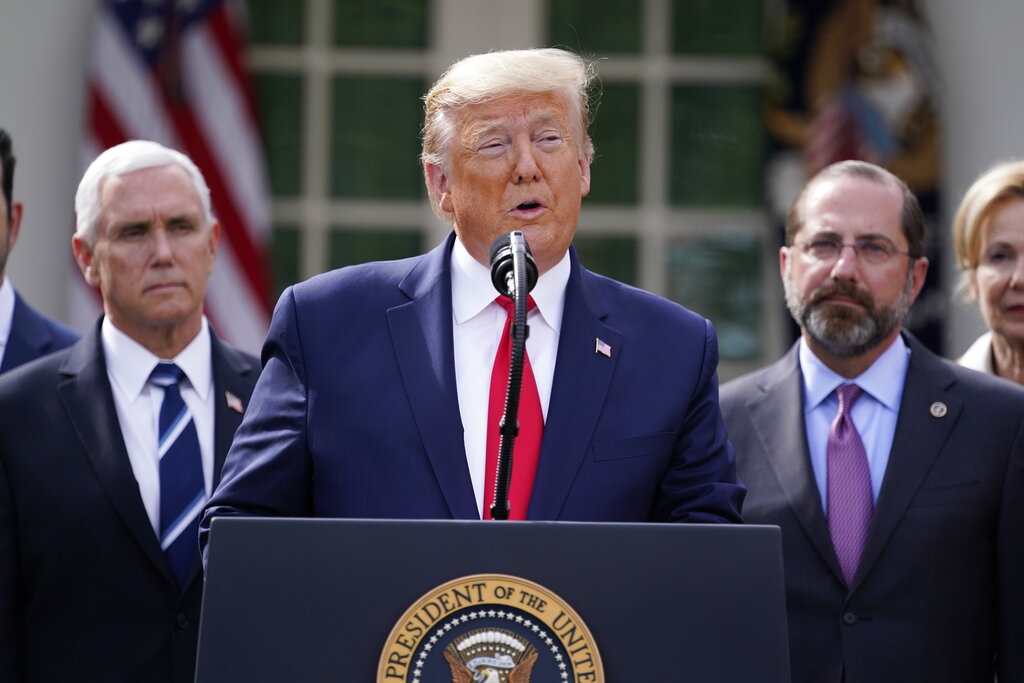 President Donald Trump speaks during a news conference about the coronavirus in the Rose Garden of the White House, Friday, March 13, 2020, in Washington. (AP Photo/Evan Vucci)

President Donald Trump announced Friday that he is declaring the coronavirus pandemic a national emergency, as Washington struggles with providing Americans with relief and officials race to slow the spread of the outbreak.

Speaking from the Rose Garden, Trump said, “I am officially declaring a national emergency.” He said the emergency would open up $50 billion for state and local governments to respond to the outbreak.

Trump said he was also giving Secretary of Health and Human Services Secretary Alex Azar emergency authorities to waive federal regulations and laws to give doctors and hospitals “flexibility” in treating patients.

Trump spoke as negotiations continue between the White House and Congress on an aid package, but there was no announcement of a breakthrough, as House Democrats prepare to vote on their own measure Friday.

THIS IS A BREAKING NEWS UPDATE. AP's earlier story follows below:

Speaker Nancy Pelosi announced Friday the House would approve its coronavirus aid package, imploring the Trump administration and congressional Republicans to “put families first” by backing back the effort to provide Americans with relief as officials race to slow the spread of outbreak.

The House Democratic leader spoke from the speaker's balcony at the Capitol ahead of President Donald Trump's planned 3 pm news conference at the White House, as the power centres of Washington were shuttered to visitors.

“Our nation, our great nation has faced crisis before," Pelosi said. “And every time, thanks to the courage and optimism of the American people, we have prevailed. Now, working together, we will once again prevail.”

Trump has not yet publicly backed the package, making its outcome uncertain in Congress, as he prepares his own response, which was still evolving in the hours before his press conference.

Trump is poised to invoke emergency powers to confront the crisis, according to two people familiar with the planning who spoke on condition of anonymity. It was still unclear, however, what mechanism Trump would use to free up additional federal resources for testing and treatment as well as for helping those struggling with the economic fallout.

Trump announced his event at the White House with a tweet: “Topic: CoronaVirus!”

Pelosi and the Trump administration have been laboring to finish a coronavirus aid package, which stalled as Republicans declined to sign on without the president's backing.

Central to the package is free testing for the virus and guaranteed sick pay for workers who are taking time away from jobs, along with an infusion of dollars to handle unemployment benefits and boost food programs for children, families and seniors.

Pelosi and Treasury Secretary Steven Mnuchin, whom Trump tapped to negotiate for the administration, have engaged in around-the-clock negotiations.

But Republican leaders in Congress slowed the deal, wanting assurances that Trump would publicly support the agreement before signing off on it ahead of any vote, according to a top congressional aide unauthorised to discuss the private talks and speaking on condition of anonymity.

GOP leader Kevin McCarthy of California, the House minority leader, was huddled with Mnuchin and Trump at the White House.

“We can only defeat this outbreak if we have an accurate determination of its scale and scope, so that we can pursue the precise science-based response that is necessary to put families first,” Pelosi said.

The White House is under enormous pressure, dealing with the crisis on multiple fronts as it encroached ever closer on the president.

The virus has swept in alarming ways across American life, sending the financial markets into a dangerous slide and shuttering schools and sporting events and limiting everyday interactions in communities across the country.

The administration's federal task force managing the crisis was working furiously to break a bottleneck in the nation's ability to test for the new virus, and weighing what sort of emergency powers Trump would need to invoke to provide needed aid to overwhelmed state and local governments.

And a personal health scare intensified as White House officials worked to determine the level of exposure by the president and senior aides to several foreign officials who have since tested positive for the virus.

In one welcome announcement, the administration said Friday it was awarding $1.3 million to two companies trying to develop rapid COVID-19 tests that could detect within an hour whether a person is positive for the new coronavirus.

For most people, the new coronavirus causes only mild or moderate symptoms, such as fever and cough. For some, especially older adults and people with existing health problems, it can cause more severe illness, including pneumonia.

The vast majority of people recover. According to the World Health Organisation, people with mild illness recover in about two weeks, while those with more severe illness may take three to six weeks to be over it.

Earlier Friday, Mnuchin sounded an optimistic note. “I think we're very close to getting this done,” he said in an appearance on CNBC.

On the COVID-19 illness, Mnuchin cautioned that “people should understand the numbers are going to go up before they go down.”

Pelosi and Mnuchin continued their constant cross-town phone calls throughout a tense morning of negotiations to firm up and salvage the emerging deal that has widespread support from Democrats and some in the business community seeking certainty.

Providing sick pay for workers is a crucial element of federal efforts to stop the rapid spread of the infection. Officials warn that the nation's healthcare system could quickly become overwhelmed with gravely sick patients, as suddenly happened in Italy, one of the countries hardest hit by the virus.

The ability to ensure paychecks will keep flowing — for people who stay home as a preventative measure or because they're feeling ill or caring for others — can help assure Americans they will not fall into financial hardship.

“We're in an emergency, and we're trying to respond as fast as we can," said House Appropriations Committee Chairwoman Nita Lowey, D-NY, as lawmakers filed in and out of Pelosi's office on Friday.

The potential deal between Congress and the White House would cap a tumultuous week in which Washington strained for a comprehensive response to an outbreak that is testing the nation's political, financial and health care systems.

Trump has struggled to show he's on top of the crisis, after giving conflicting descriptions of what the US is doing to combat the virus.

Pelosi promised a third coronavirus package will follow soon, though the House is leaving Washington on Friday for a previously scheduled recess. That measure will include more aggressive steps to boost the US economy, which economists fear has already slipped into recession.

But there's little appetite within either party for Trump's proposal to suspend collection of the 6.2 percent Social Security payroll tax. States are already clamoring for fiscal relief from Washington as the virus threatens their budgets.

The coronavirus crisis also got personal for Trump and some members of Congress.

The president, his daughter Ivanka, Attorney General WIlliam Barr and lawmakers are among those who have been in contact with others who have now tested positive for the coronavirus.

Australian Home Affairs Minister Peter Dutton, now in isolation at a hospital after testing positive for the coronavirus, had returned to Sydney from Washington, where he met Barr and Ivanka Trump last week.

White House officials have not responded to questions about whether the administration officials intend to be tested or self-quarantine.

Barr, meanwhile, was staying home Friday, though he “felt great and wasn't showing any symptoms,” according to his spokeswoman Kerri Kupec. She said the CDC did not recommend testing at this point.

In addition, just days after meeting Trump and Sen. Rick Scott, R-Fla, at the president's Mar-a-Lago resort, the communications chief for Brazil's president, Fábio Wajngarten, tested positive for coronavirus. Scott said he was isolating himself. Trump, 73, said he was not concerned.

GOP Senator Lindsey Graham, who was also at Trump’s club on the weekend, joined a growing list of lawmakers who have chosen to isolate themselves as a precaution. He announced Friday that he also met with the Australian official who has now tested positive. And GOP Senator Ted Cruz of Texas, who had previously isolated himself after a potential exposure at a conservative conference in Washington, said Friday he met with a Spanish official and is now self-quarantining.

Lawmakers from both parties expressed alarm at the US response, and especially over how few patients have been tested.

Dr Anthony Fauci, infectious disease chief at the National Institutes of Health, in several television interviews Friday, said more tests would be available over the next week, but that officials should not wait before trying to mitigate the virus' effects.

“We will have considerably more testing in the future, but you don't wait for testing,” Fauci said on ”CBS This Morning." He said school closings and similar measures are "generally an appropriate approach.”

“We're at a critical point now as we seek to blunt the rise in cases to make sure it's a hill, not a mountain,” Fauci said on ABC's “Good Morning America."

Brazilian who met Trump has COVID-19; No plans to test Trump

5 Facts about the new coronavirus