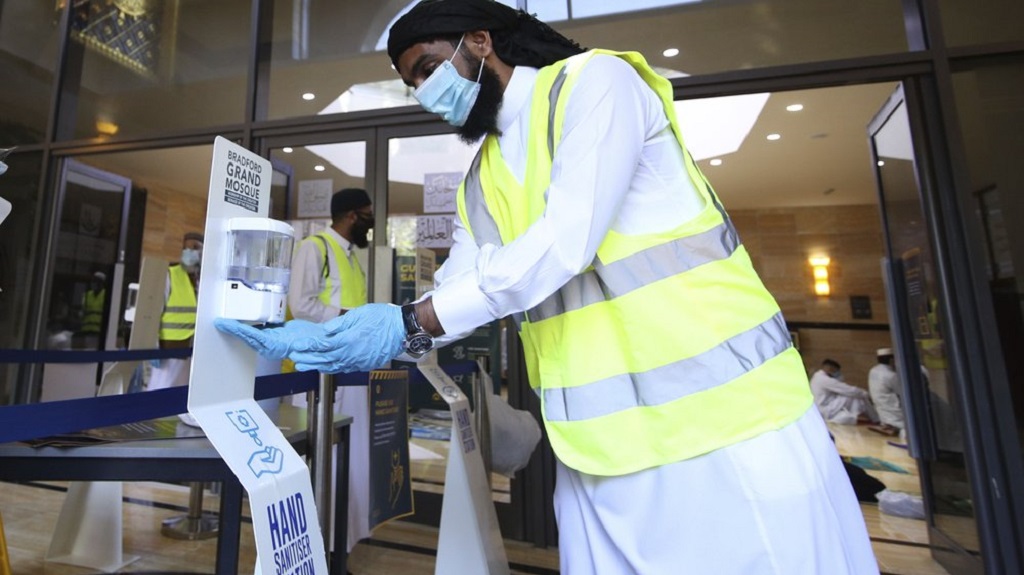 A Muslim man uses hand sanitizer at the Bradford Grand Mosque as Muslims gathered for Eid al-Adha prayers, in Bradford, West Yorkshire, England, Friday July 31, 2020. Britain’s health secretary has defended a decision to reimpose restrictions on social life in a swath of northern England, saying it was important to keep ahead of the spread of COVID-19. The affected region has a large Muslim population, and the restrictions come prior to the Eid al-Adha holiday starting on Friday. (Danny Lawson/PA via AP)

Prime Minister Boris Johnson put some planned measures to ease the UK's lockdown on hold Friday, just hours before they were due to take effect, saying the number of new coronavirus cases in the country is on the rise for the first time since May.

Johnson said at a news conference that statistics show that the prevalence of COVID-19 in the community is likely increasing, with an estimated 4,900 new infections every day, up from 2,000 a day at the end of June.

"We just can't afford to ignore this evidence," he said.

"With those numbers creeping up, our assessment is that we should now squeeze (the) brake pedal in order to keep the virus under control."

He called off plans to allow venues, including casinos, bowling alleys and skating rinks, to open from Saturday, Aug. 1. Wedding receptions were also put on hold, along with plans to allow limited numbers of fans back into sports stadiums and audiences into theatres.

Johnson said the measures will be reviewed after two weeks.

He said a rule requiring face coverings to be worn in shops and on public transit will be extended to museums, galleries, cinemas and places of worship.

Scientists advising the government say they are no longer confident that the R figure, which measures how many people each infected person passes the disease to, is below one in England. A number above one means the virus will spread exponentially.

On Thursday, the government re-imposed restrictions on social life in a swath of northern England because of a surge in cases, barring households from visiting one another.

Health Secretary Matt Hancock said that while it's not the "sort of decision that anybody would want to take,'' the government had no choice.

Under the new restrictions, people from different households in Greater Manchester, England's second largest metropolitan area, have been asked to not meet indoors.

The order also applies to the surrounding areas of Lancashire and West Yorkshire counties, affecting more than 4 million people in all.

Hancock said data showed the coronavirus was being spread primarily between households.

He told the BBC that "one of the terrible things about this virus is it thrives on the sort of social contact that makes life worth living."

Opposition politicians supported the latest move but criticized the government for announcing the restrictions in a tweet from Hancock late Thursday, just two hours before they came into force at midnight.

Labour Party business spokeswoman Lucy Powell said the "bolt out of the blue" approach was "not the way to build confidence and to take people with you and maximize compliance with these steps."

The affected region has a large Muslim population, and the restrictions coincide with the Eid al-Adha holiday, where many people would normally gather in each other's homes.

The Muslim Council of Britain's secretary general, Harun Khan, sharply criticized the way the announcement was made, saying that for Muslims in the affected areas, "it is like being told they cannot visit family and friends for Christmas on Christmas Eve itself.''

The northern England measures are the second batch of regional restrictions imposed to try to curb a second wave of the virus in Britain, following a stricter local lockdown in the central England city of Leicester.

The government said restaurants, pubs, shops and hairdressers in Leicester could reopen from Monday, more than a month after they were closed amid a surge in cases.

Britain's official coronavirus death toll stands at just over 46,000, the third-highest total in the world after the United States and Brazil.