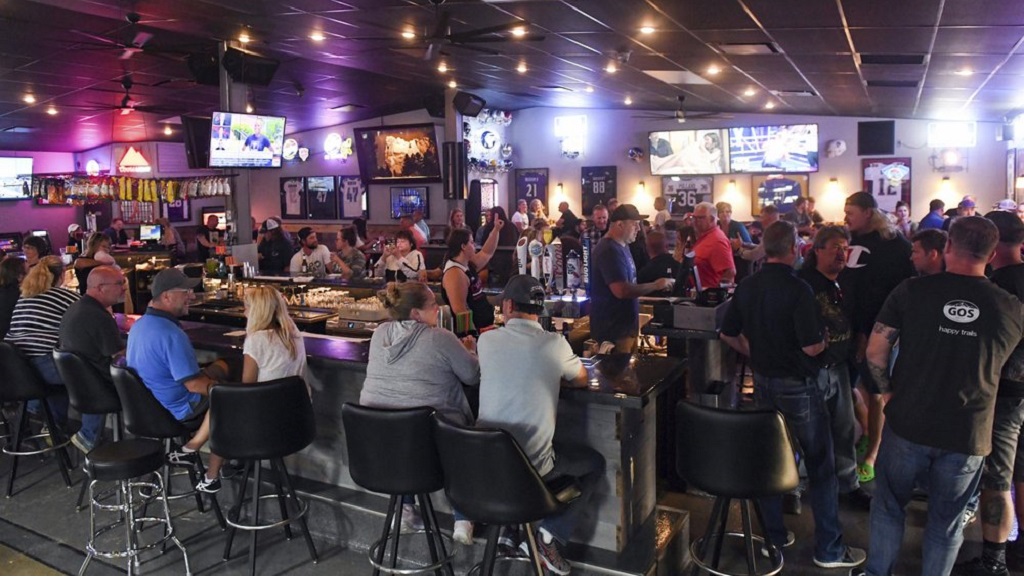 FILE - In this Thursday, June 18, 2020, file photo, patrons fill the Crow Bar in Sioux Falls, S.D. Authorities are closing honky tonks, bars and other drinking establishments in some parts of the U.S. to stem the surge of COVID-19 infections — a move backed by sound science about risk factors that go beyond wearing or not wearing masks. (Erin Bormett/The Argus Leader via AP, File)

The United States and South Africa have both reported record new daily coronavirus infections, with US figures surpassing 50,000 cases a day for the first time, underlining the challenges still ahead as nations press to reopen their virus-devastated economies.

The US recorded 50,700 new cases, according to a tally kept by Johns Hopkins University, as many states struggled to contain the spread of the pandemic, blamed in part on Americans not wearing masks or following social distancing rules.

Surging numbers in California prompted Gov. Gavin Newsom to announce just ahead of the Fourth of July weekend that he was closing bars, theatres and indoor restaurant dining over most of the state, a region that includes about 30 million people and Los Angeles County.

"The bottom line is the spread of this virus continues at a rate that is particularly concerning," Newsom said.

Confirmed cases in California have increased nearly 50 percent over the past two weeks, and COVID-19 hospitalizations have gone up 43 percent. Newsom said California had nearly 5,900 new cases and 110 more deaths in just 24 hours.

Infections have been surging in many other states as well, including Florida, Arizona and Texas. Florida recorded more than 6,500 new cases and counties in South Florida were closing beaches to fend off large July Fourth crowds that could further spread the virus.

"Too many people were crowding into restaurants late at night, turning these establishments into breeding grounds for this deadly virus," Miami-Dade Mayor Carlos Gimenez said.

Despite the fact that the US has the highest number of infections and deaths in the world by far, President Donald Trump seemed confident the coronavirus would soon subside.

"I think we are going to be very good with the coronavirus," he told Fox Business. "I think that, at some point, that's going to sort of just disappear, I hope."

The true toll of the pandemic is believed to be significantly higher, in part because of limited testing and mild cases that have been missed.

In South Africa on Thursday, authorities reported 8,124 new cases, a new daily record. The country has the most cases in Africa with more than 159,000, as it loosens what had been one of the world's strictest lockdowns.

India, the world's second-most populous country with more than 1.3 billion people, surpassed 600,000 infections on Thursday after over 19,000 new cases were reported. India has reported nearly 100,000 new cases in the past four days alone.

Despite the surging numbers, the western beach of state of Goa, a popular backpacking destination, allowed 250 hotels to reopen Thursday after being closed for more than three months.

Tourists will either have to carry COVID-19 negative certificates or get tested on arrival.

Many industries and businesses have reopened across the country, and Indians have cautiously returned to the streets. Schools, colleges and movie theatres are still closed.

On the medical front, the World Health Organization says smoking is linked to a higher risk of severe illness and death from the coronavirus in hospitalized patients, although it was unable to specify exactly how much greater those risks might be.

In a scientific brief published this week, the U.N. health agency reviewed 34 published studies on the association between smoking and COVID-19, including the probability of infection, hospitalization, severity of disease and death.

WHO noted that smokers represent up to 18 percent of hospitalized coronavirus patients and that there appeared to be a significant link between whether or not patients smoked and the severity of disease they suffered, the type of hospital interventions required and patients' risk of dying.

In Japan, the capital of Tokyo confirmed 107 new cases of coronavirus, nearly triple that of June 24, just before the number began to spike. Tokyo Gov. Yuriko Koike said many cases were linked to nightclubs and bars and urged their workers to proactively be tested and take further safety measures.

"We need to use caution against the spread of the infections," Koike said.

South Korea confirmed 54 more COVID-19 cases as the coronavirus continued to spread beyond the capital region and reach cities like Gwangju, which has shut schools and tightened social restrictions after dozens fell sick this week.

Despite the spike in many US states, several eastern states have seen their new infections slow down significantly, including New York, Massachusetts, Connecticut, Rhode Island and New Jersey, which was going ahead Thursday with allowing its famous Atlantic City casinos to reopen.

Strict social distancing and other measures will be in place. Gamblers will not be allowed to smoke, drink or eat anything inside the casinos.

They will have to wear masks in public areas of the casino and have their temperatures checked upon entering.