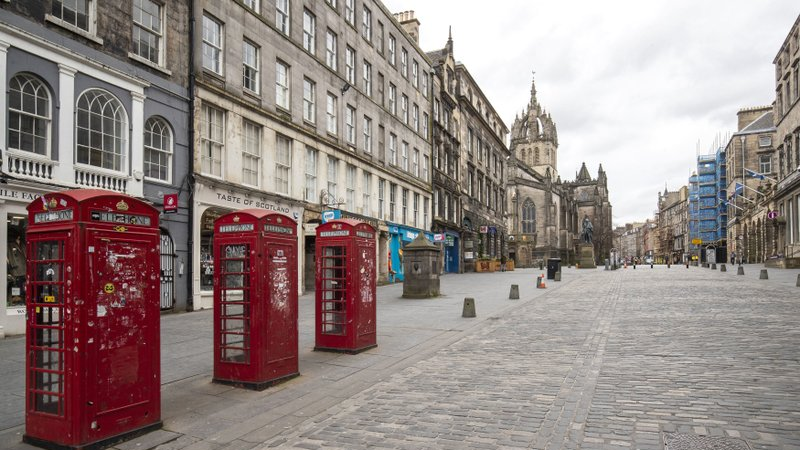 This photo shows the Royal Mile, part of the Old Town of Edinburgh, Scotland, Britain, Saturday, March 21, 2020, on the first day after Prime Minister Boris Johnson ordered pubs and restaurants across the country to close as the government announced measures to cover the wages of workers who would otherwise lose their jobs due to the coronavirus outbreak. (Jane Barlow/PA via AP)

Italian Premier Giuseppe Conte went on TV near midnight, announcing that he was tightening the country's lockdown and shutting down all production facilities except those providing essential goods and services. While he cautioned citizens to be calm and patient, insisting there ''is no alternative,'' scientists elsewhere released graphics showing that avoiding even one infection means that scores more are avoided down the line. 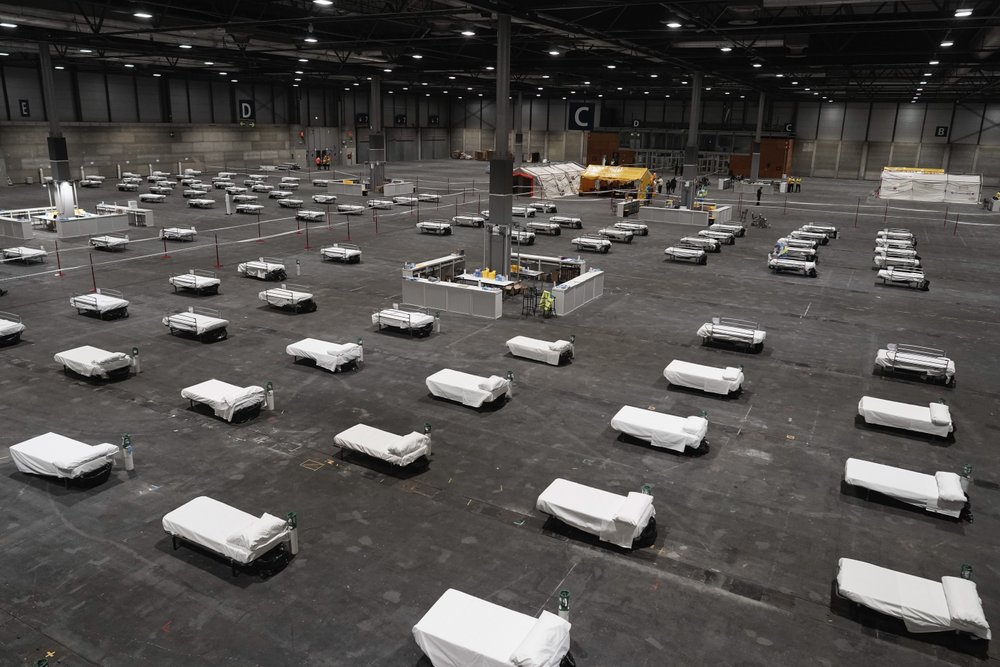 (In this photo provided by Comunidad de Madrid, beds for COVID-19 patients are placed at IFEMA convention center in Madrid, Spain on Saturday, March 21, 2020. Spanish health authorities have acknowledged that some intensive care units in the hardest-hit areas are close to their limit. The army was building a field hospital with 5,500 beds in a convention center in Madrid, where hotels are also being turned into wards for virus patients without serious breathing problems. (Comunidad de Madrid via AP))

Italy announced its biggest day-to-day increase of infections, which rose to 53,000 people, with nearly 800 new deaths. As bodies pile up in Italian hospitals, morgues and churches, and as medical workers plead for more help, there is no sign yet that Italy is taming its arc of its contagion. Italy now has 4,825 deaths, more than all of China, where the virus first emerged late last year.

In Britain, where Sunday was Mother's Day, the government had a stark message for millions of citizens: Visiting your mother could kill her. British Prime Minister Boris Johnson implored citizens to forego traditional family visits and Sunday lunches.

"We cannot disguise or sugar coat the threat," he said. "If your mother is elderly or vulnerable, then I am afraid all the statistics show that she is much more likely to die from coronavirus."

"This time the best thing is to ring her, video call her, Skype her, but to avoid any unnecessary physical contact or proximity," he added.

Iran's supreme leader refused US assistance Sunday to fight the new coronavirus, citing an unfounded conspiracy theory that the virus could be made by America. Ayatollah Ali Khamenei's comments come as Iran faces crushing US sanctions over its nuclear actions.

Iran says the new coronavirus has killed 1,685 people among its 21,638 confirmed cases — a toll that experts from the World Health Organization say is almost certainly underreported. 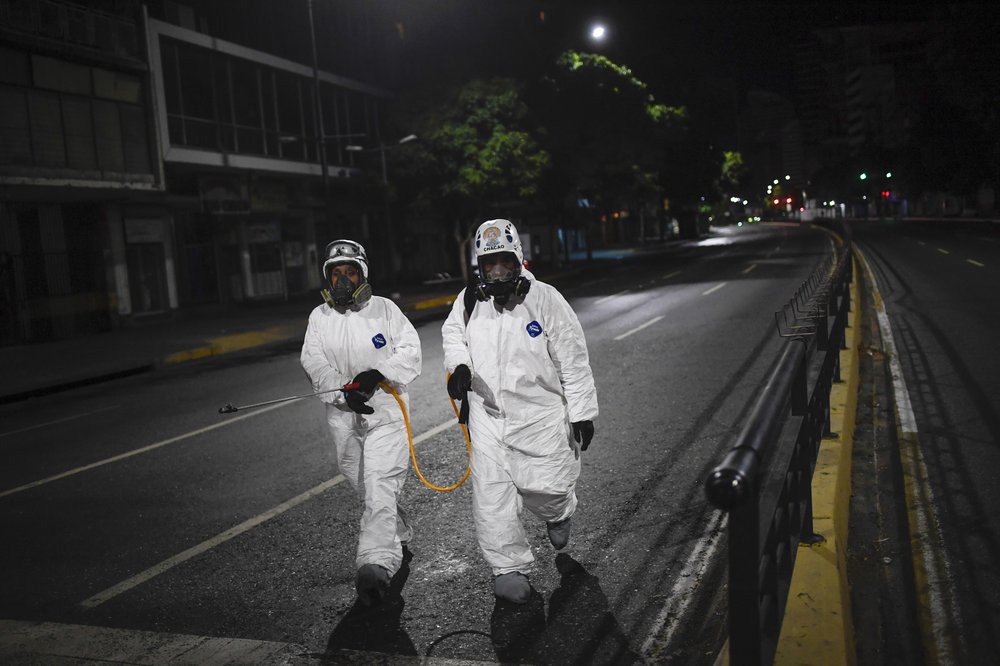 (City workers walk after spraying disinfectant on the streets as a preventive measure against the spread of the new coronavirus, in Caracas, Venezuela, Saturday, March 21, 2020. (AP Photo/Matias Delacroix))

In the US, where multiple states have ordered residents to stay indoors, New York Governor Andrew Cuomo said the government is "literally scouring the globe looking for medical supplies."

Even rural hospitals were strained as people increasingly felt the pandemic closing in.

In Washington, negotiators from Congress and the White House resumed top-level talks on a ballooning $1 trillion-plus economic rescue package, urged by President Donald Trump to strike a deal to steady a nation upended by the coronavirus pandemic.

Trump continued to strike a confident tone about the nation's ability to defeat the pandemic soon, even as health leaders acknowledged that the US is nowhere near the peak of the pandemic.

"We are going to be celebrating a great victory in the not too distant future," Trump declared.

At least 38 people tested positive at New York City's notorious Rikers Island jail complex and nearby facilities — more than half of them inmates. Another inmate became the first in the US to test positive in a federal jail.

Worldwide, more than 307,000 people have been infected and over 13,000 have died, according to Johns Hopkins University.

About 150 countries now have confirmed cases, and deaths have been reported in more than 30 American states.

For most people, the new coronavirus causes only mild or moderate symptoms, such as fever or coughing. For some, especially older adults and people with existing health problems, it can cause more severe illness, including pneumonia. Some 92,000 people have recovered, mostly in China.

Spanish health authorities say intensive care units in the hardest-hit areas are close to their limit. The army was building a field hospital with 5,500 beds in a convention centre in Madrid, where hotels are also being turned into wards for virus patients without serious breathing problems.

In the US, New Jersey and St. Louis were added to a growing list of areas where residents were ordered to stay home. 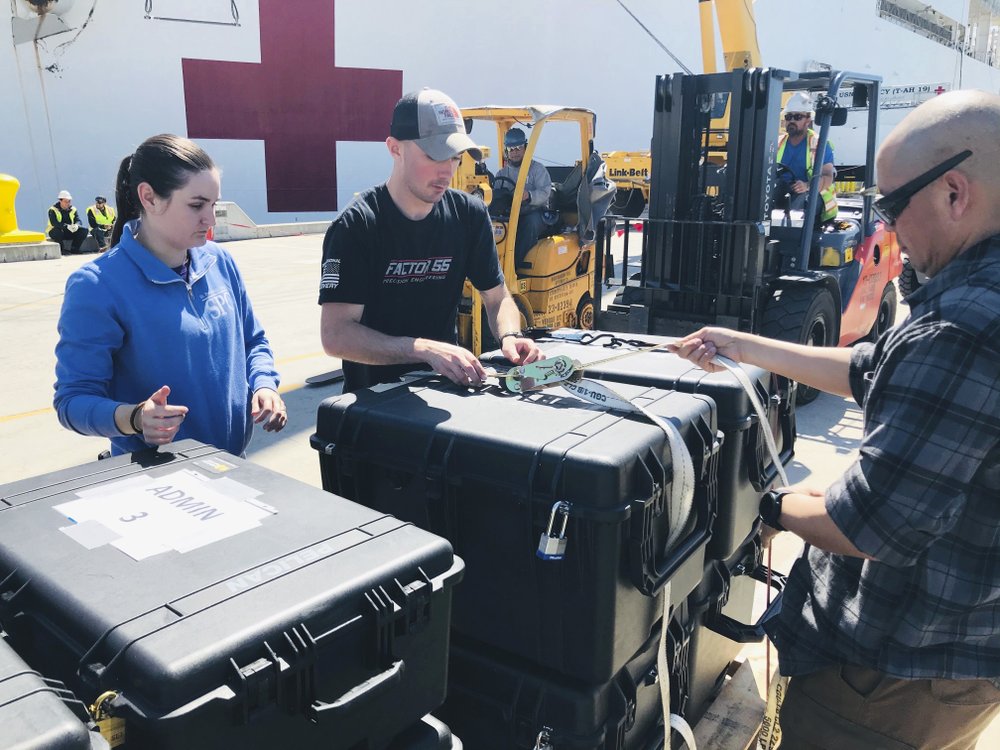 Hawaii's governor instituted a mandatory 14-day self-quarantine starting Thursday of both returning residents and visitors traveling to the state and urged people to delay planned vacations to the Pacific archipelago. People under quarantine may only leave their homes or hotels for medical emergencies.

Singapore said Sunday that it will fully shut its borders from Tuesday after recording its first two deaths.

All short-term visitors will from Tuesday be barred from entering or transiting through the city-state in order to reduce the risk of imported cases, while citizens or residents will face a 14-day quarantine.

Sri Lanka on Sunday blocked any passenger flights and ships from entering the Indian Ocean Island.

The Chinese city of Wuhan — where the global pandemic was first detected and the first city to be locked down — went a fourth consecutive day on Sunday without reporting any new or suspected cases.

Wuhan must go 14 straight days without a new case in order for draconian travel restrictions to be lifted, but a special train brought in more than 1,000 car factory employees to the key automotive city for the first time since the outbreak.

Parks and other public gathering places are reopening in China as people return to work and businesses resume. However, the country has placed increasing restrictions on those coming from overseas, who have made up the majority of its new infections in recent days.

All arrivals to Beijing from abroad must be quarantine themselves for two weeks in a hotel at their own expense. And beginning Monday, flights into the capital will be diverted to twelve airports in other cities, where passengers will have to pass a health inspection before they can fly onward to Beijing.

China's first recent case of community infection was reported Sunday in the southern province of Guangzhou, where a woman contracted COVID-19 from someone who came in from Turkey. As the outbreak has died down domestically, an influx of people coming into the country has stoked fears of a resurgence.