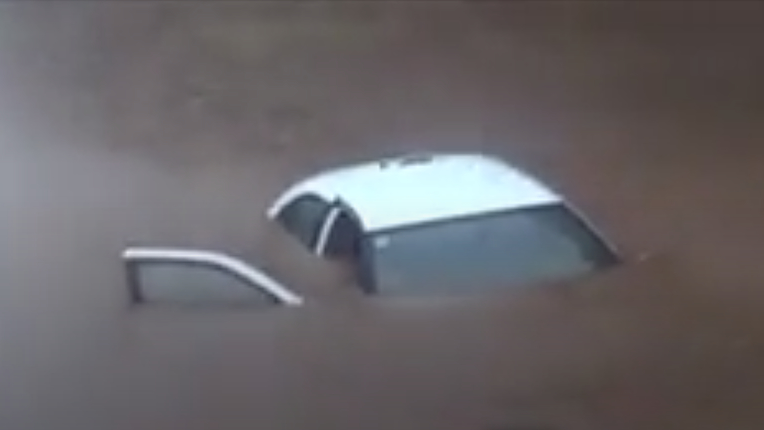 The car three occupants were rescued from on Sunday in Morvant. David Welch of Real Talk TT captured the rescue on camera.

A group of young men from Morvant, Trinidad is receiving praise on social media for rescuing the occupants of a car that got stuck in floodwaters on Sunday.

The rescue was captured by cameraman David Welch of Real Talk TT.

Welch told Loop Trinidad he was out on the field capturing footage of the floods caused by Tropical Storm Karen when he was told that a garbage truck was tuck in floodwaters in Morvant.

He went to an area called First and Last where he saw a white car submerged in floodwaters.

Welch said the young men, who all live in the compound where he was filming, rescued a man and a woman from the car and was in the process of rescuing the woman’s husband when he got there.

They also fished the woman’s handbag out of the raging waters.

Welch said he didn’t get the names of the couple but despite people's criticism about the woman's interest in her bag, they were both traumatised and in shock over what had happened.

He said the couple had just left a church in the area when they drove into the floodwater.

He said in video footage which will be released on the Real Talk show later today, the husband is seen crying.

The video has over 4000 shares from Real Talk’s page and many have praised the actions of the residents.

One woman said: “Thank God for you all black young men ppl tend to highlight only the negative side of you thank you to the person filming this.”

Another wrote: “Did was so humanitarian of these guys. May God bless the kindness they have done today. Know people always talk negative about these areas. But this show there are hearts of compassion in the people.”

Watch: Flooding reported across Trinidad due to heavy rainfall