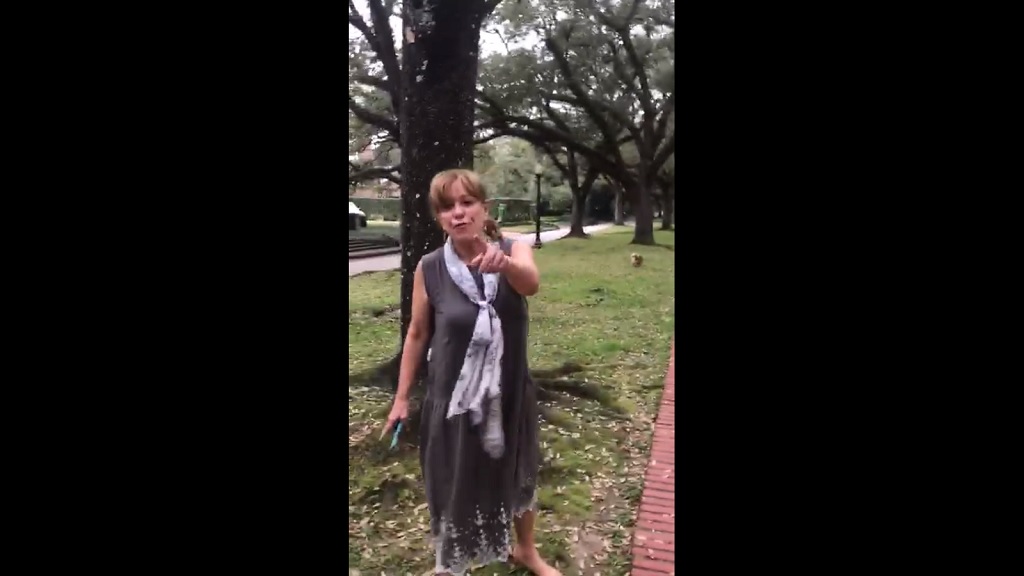 Photo taken from a screenshot of a video shared by Facebook user Kelyn Alyssa, shows Franci Neely hitting her husband's hand while he recorded the incident on his mobile phone. The mother said the woman released her dog which ran toward her daughter before she was able to lift her out of harm's way.

A Trinidadian mother living in Houston, Texas, has filed a report with police against a woman who allegedly attacked her family during her daughter's photoshoot.

The video, which has amassed almost half a million views online, shows the woman coming up to Trinidadian mother Kelyn Alyssa and her husband and hitting his mobile phone while recording.

Kelyn, who told LoopTT that she is originally from Cunupia, Trinidad, recounted the incident which took place on February 16, 2019 via a social media post:

“On Saturday 02.16.19 my husband and I went to North Blvd in Houston to have some photos taken of our daughter to celebrate her first birthday. It’s a well known public trail where many people have photos taken. When we arrived there were several other photographers in the vicinity, working with their clients."

She said their photographer arrived and they set up the props for her 11-month-old daughter's photo shoot. She added that there were many other people present who were jogging and walking their dogs, as the promenade is a public space.

She said after 35 minutes into the shoot, they heard a female voice shouting at them and saw a woman who stopped her car and shouted at them from the window.

She said the woman alighted from the car and released her dog, which went toward the baby.

"Out of this light blue Jaguar convertible emerges this barefoot caucasian woman wearing a housedress, holding nothing but a cell phone and carrying her dog. She marches towards us and upon arriving, takes a look at my 11 mth old daughter and releases her unleashed dog, who at the time could not walk and was sitting peacefully on the pathway."

"In the midst of her shouting, I immediately and calmly asked her to restrain her dog as it made a beeline for the baby and it was coming dangerously close to my child. I actually crouched next to the baby and put my hand out to try to shoo this strange dog away. The lady begins shouting at us that we are on private property, and that she will not restrain her dog because she can do whatever she wants there."

"I told her if her dog damages my child I will be pressing charges and she takes out her phone, starting to record me, asking me if I was threatening her. I repeated what I said. At this point her dog wandered away."

"Our photographer calmly approached her to let her know that she was the one directing the shoot. The lady tells her that she brought “these” people into “her” neighborhood. The lady had no answer when asked why she did not approach the other photographers WHOM SHE PASSED ON HER WAY TO APPROACH US. Her lack of response prompted my husband to take out his phone to record what was going on."

She said the woman also picked up the props angrily around the baby, causing the baby to cry.

"At this point the lady stomps towards my baby and starts aggressively trying to remove the props placed around her, startling me. The baby, petrified by her aggression, started to scream and started crawling away from her into my arms."

"This did not deter her and she continued - my husband and the photographer quickly approached her to block her from doing this and at this point I started to shout at the lady about her aggression upsetting my child."

"She appeared stunned that I finally started to shout back at her...but I’m not sure what else she was expecting. The rest is what you see below."

Kelyn said they also spoke to a police officer who confirmed that they had broken no laws by having a photo shoot in the park.

"When my husband spoke to a police officer following this craziness he confirmed what we already knew - we were doing nothing wrong because we were on public property. The photographers in the vicinty all approached us afterwards completely appalled by this woman’s behaviour, and confused as to why they werent targeted by her at all."

"She passed people taking fashion shoots, people crouching on the walkway, “trampling” her beloved grass - and came directly at the photoshoot with the gold “1” balloon to cause a scene. With an 11 mth old sitting on the floor. And her parents making funny faces to make her laugh. Absolutely disgusting."

She said a police report has been filed, however, according to a report by ABC13, no charges have yet been filed.

The woman who attacked the family has been identified as Franci Neely, a "Houston socialite and ex-wife of Houston Astros owner Jim Crane".

The Broadacres Homeowners Association said the high volume of people taking photos in the park is damaging the property.

The group said a deed was granted to the group in the 1920s and they are in a legal battle with Houston regarding property rights.

"The Broadacres Homeowners Association Invests lots of money paying to maintain the trees, grass and walkways in our neighborhood. The high volume of commercial photography damages the property that Broadacres HOA pays to maintain and interferes with dog walkers and others who merely want to walk under the pretty trees. We asked the commercial photographers to please stop.

"I am very sorry that I got upset on late Saturday afternoon. Putting it in context, however: I saw three commercial photography shoots in one block at the same time, something that happens frequently. When I explained the situation to the first and third groups, they were respectful. The couple whose photo shoot obstructed the walkway was not. It's hard to remain composed when confronted by shouted threats of lawsuits and false, inflammatory accusations," Neely said.

ABC13 also recorded a separate video recording which shows Neely carrying out a similar attack with another person:

ANOTHER PHOTO SHOOT FIGHT: An @abc13houston viewer sent us this video of the same woman who confronted a family’s photo shoot this weekend. Why she told me she took aim at the camera at 10:00 p.m. https://t.co/aGueabb59j pic.twitter.com/aMCvvCHAXL

Hunt on for poacher seen 'making cook' with protected anaconda

Canadian's Trini doubles are a hit in Toronto