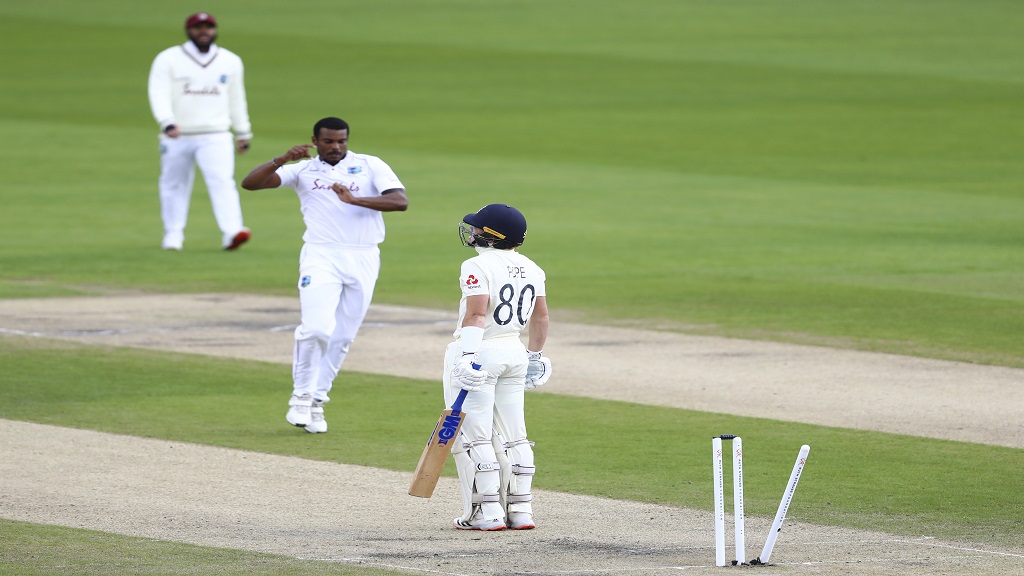 West Indies picked up the final six England wickets in the first session on day two of the deciding third at Old Trafford on Saturday. However, Stuart Broad wrested the momentum  back in England’s favour by smashing a counterattacking 62 before the team was dismissed for 369 to bring up lunch.

Resuming on 258-4, England lost a wicket in four consecutive overs to collapse to 280-8, with Ollie Pope falling first and failing to add to his overnight score of 91.

The collapse brought Broad to the middle and the left-hander hit the Windies’ bowlers to all parts of Old Trafford, reaching his half-century in 33 balls — putting him tied for third place in the all-time list of England’s fastest test fifties.

Broad’s 45-ball innings ended when he holed out in the deep off an ambitious swept volley, but by then he had frustrated the West Indies and put England back in charge of a series currently poised at 1-1.

His potentially game-changing ninth-wicket partnership with Dom Bess was worth 76 runs, with Broad hitting nine fours and a six.

Bess was left stranded on 18 after Anderson was the last man out for 11. England added 111 runs in the session.

Earlier, Pope was dropped at slip off Shannon Gabriel before the same paceman got one through the gate his very next over.

Chris Woakes (1) then slashed at a wide ball onto his stumps to give fast bowler Kemar Roach his 200th test wicket.

Jos Buttler, who resumed on 56, was out for 67 when he edged Gabriel to Jason Holder at second slip and the West Indies captain also pouched a catch to remove Jofra Archer (3) off the bowling of Roach.

The Windies, who won the first test in Southampton before losing the second match in Manchester, are looking to capture a test series in England for the first time since 1988.