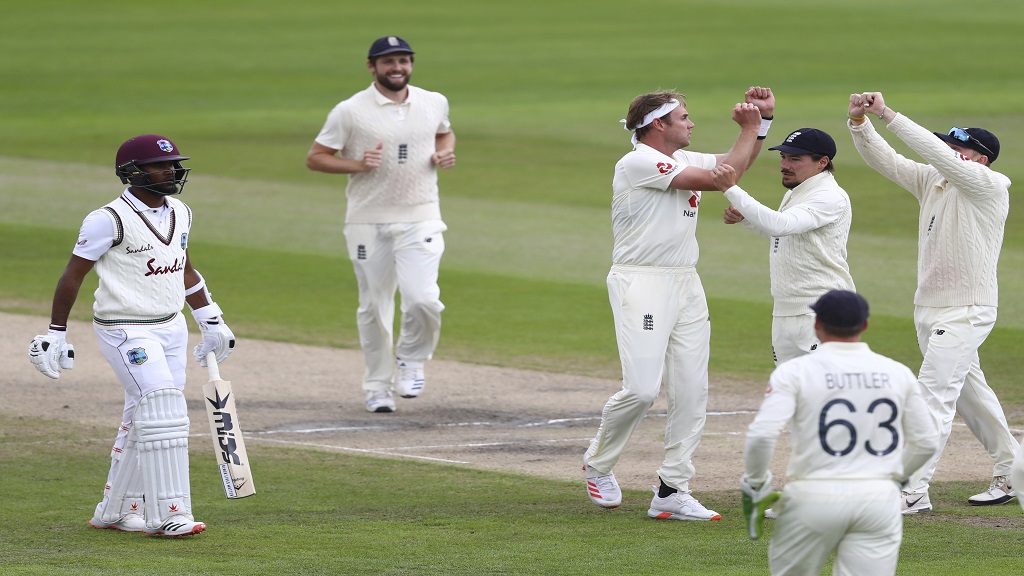 West Indies were struggling on 134-6 at stumps on the second day of the third and deciding test match against England at Old Trafford on Saturday.

The day belonged to Stuart Broad, who stepped into the all-rounder role as England took control.

The seamer was once fancied as a player who could make big contributions with bat and ball for his country, but it has been chiefly as a world-class paceman that he has shone.

On Saturday, Broad thrashed a priceless 62 to fend off a West Indies fightback at Old Trafford, helping England to post 369 in their first innings.

Broad then took 2-17 in 10 overs to wreck the Windies, with James Anderson also taking 2-17 from 11 overs, the veteran pacemen on mesmerising form on an overcast afternoon in Manchester.

It meant West Indies trailed by 232 runs at the end of the second day of the series decider, needing to find lower-order runs on Sunday to stave off the threat of a possible follow-on.

The day ended well for England, albeit early due to fading light, but it had begun in dispiriting fashion for Joe Root's troops.

Ollie Pope failed to add to his overnight 91, bowled by Shannon Gabriel to trigger a collapse from 262-4 to 280-8, and it took Broad's lusty hitting to salvage pride and switch momentum back England's way.

Amid the collapse, Kemar Roach (4-72) reached 200 Test wickets when he removed Chris Woakes, and there was frustration for Jos Buttler, whose hopes of a second Test century were quashed when he fell for 67, Gabriel striking for the second time before lunch.

But Broad stood tall. In a cavalier 45-ball innings, England's number 10 cracked nine fours and a six, dominating a 76-run partnership for the ninth wicket with Dom Bess before attempting one big hit too many, caught in the deep by Jermaine Blackwood off Roston Chase.

Jofra Archer struck with a dynamite delivery, the ball arrowing towards the ribs of John Campbell, who had looked good in reaching 32 but could only paddle away a snorter of a ball to Rory Burns at gully.

Anderson, at his home ground, was typically probing and drew edges to account for Shai Hope and Shamarh Brooks, before Woakes bowled Blackwood.