Windies' struggles continue as England close in on series victory 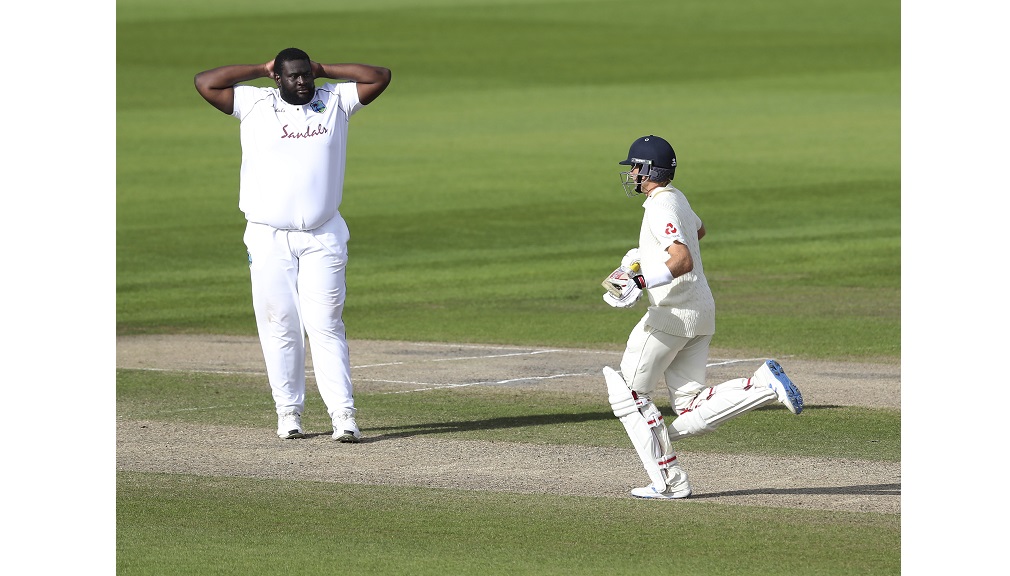 The magnificent Stuart Broad took his tally of Test wickets to 499 as England dominated West Indies on day three at Old Trafford to close in on a series victory.

Broad smashed a half-century before taking striking twice with the ball on day two and the paceman was the star of the show again in Manchester on Sunday.

Jason Holder (46) and Shane Dowrich (37) ensured the tourists avoided the follow-on, but Broad (6-31) took four wickets in quick time before lunch to bowl them out for 197 - giving England a first-innings lead of 172 runs.

Broad (2-8) then reduced the Windies to 10-2 at stumps and they look set to lose the Wisden Trophy unless the rain forecast to wipe out day four also rescues them on Tuesday.

Holder had a life when he was brilliantly caught by Ollie Pope after the Windies resumed on 137-6, but Chris Woakes over-stepped.

That did not prove to be costly, though, as Broad ended a 68-run stand in his first over of the day by trapping the captain bang in front and soon wrapped up the innings in a brilliant burst.

There was more pain for the Windies in the field after lunch, Holder struck on the thumb and wicketkeeper Dowrich took a blow to the face trying to gather a Shannon Gabriel short ball, Joshua Da Silva replacing him.

Da Silva missed a chance to stump Burns for 12 off Roston Chase and England's openers took the score on to 86-0 at tea, scoring more freely after a slow start.

Sibley raised the tempo after the break and was the first to 50 before he fell lbw to Holder to end an opening stand of 114, with Burns also raising his bat following a disdainful sweep for four off Rahkeem Cornwall.

Burns should have gone leg before to Cornwall on 75 and looked destined for a century before Chase sent him on his way, prompting Root to declare after making a swashbuckling half-century.

Broad returned to centre stage in the final 20 minutes of a dream day for England, John Campbell nicking the man of the moment's third ball to Root in the slips and nightwatchman Kemar Roach edging behind.

Broad stepped up with the bat when England needed him on Saturday, blasting 62 off just 45 balls before taking a couple of wickets.

The paceman removed Holder with his third ball on Sunday, then went on to add another three wickets in as many overs to end the Windies innings to claim an 18th five-wicket Test haul.

Broad said he was "angry, frustrated and gutted" to be left out of for the first Test and the 34-year-old has taken that fury out on the tourists in Manchester, with another two wickets late in the day putting him on the brink of a huge landmark.

Dowrich down in the mouth

Windies keeper Dowrich has struggled with the gloves this week and poor handling saw him take a painful blow after lunch.

He failed to take a short ball from Gabriel that swung after passing Burns and appeared to be struck at the side of his mouth.

Dowrich was unable to continue and the uncapped Da Silva, who will not be able to bat, padded up to take his place after a brief stint behind the stumps for Shai Hope.

Root fell in the 20s twice on his return in the second Test, but he got in on the act as a tired West Indies attack suffered.

The captain clattered Cornwall over mid-off for six as he went into one-day mode, facing just 56 balls for his highly entertaining 68 not out and the only slight disappointment for England was that Burns failed to reach three figures.