Young Jamaican model gets a nod of approval from Tyra Banks 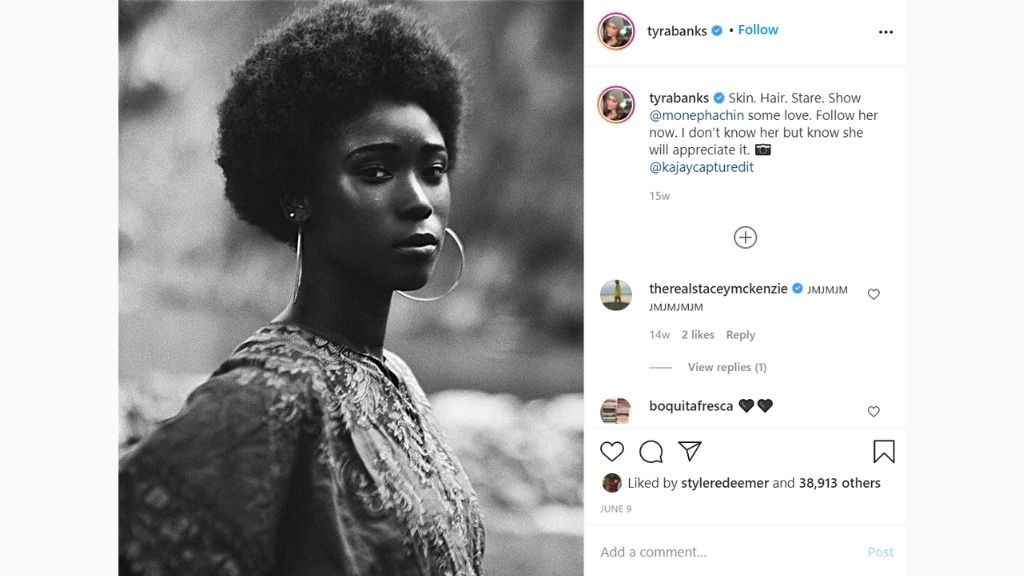 A Jamaican model has caught the attention of her idol - Tyra Banks.

Monepha Chin often watched in awe as models on the hit reality competition America’s Next Top Model (ANTM) vied for the coveted title.

From her home in Linstead, St Catherine, Chin would tune in every so often to see her biggest inspiration: Tyra Banks and the models that made it to the top, hoping one day she’d be among the greats.

In June Banks commented on one of Chin’s photos on Instagram. She was beyond herself when she saw the notification.

‘I noticed there was a comment from Tyra Banks! The supermodel! I love her so much, she’s the reason I fell in love with modelling as a child,’ she told Loop.

And as a fan of Banks’ ANTM show, Chin was even more excited to be featured on the supermodel’s Instagram page.

‘Her exact comment was ‘STUNNING!!💛’, Chin recalls, ‘I was so happy, but yet, I still couldn’t believe she’d noticed me.’

Mere days later on June 9, Banks posted a photo of Chin to Instagram for her over six million followers to see.

Skin. Hair. Stare. Show @monephachin some love. Follow her now. I don’t know her but know she will appreciate it. 📷 @kajaycapturedit

The 21-year-old, who started modelling professionally over four years ago, found it ‘exciting’ and ‘unbelievable’ when the comments and well wishes started rolling in.

‘I was shocked because I couldn’t believe someone I looked up to for so long noticed me, it gave me hope!’

‘Back in 2017, I was featured on the cover of the Jamaica Observer’s All Woman magazine for a Valentine’s Day shot by Orville Spence.’

‘Sometime later, I was featured in L Vision magazine, and, towards the end of 2017, I was accepted to compete in Pulse’s Caribbean Model Search.’

Since then Chin has kept a tunnel vision approach to the industry. But, it was this June that she relished her greatest accomplishment.

At the time, she got the Tyra Banks stamp of approval, Chin recalls feeling tireless to the point of giving up, ‘but God always sends someone to give me hope,’ she mentioned.

‘I still can’t believe but I am still thankful for her kind words!’

Now ecstatic and super confident, Chin entered a competition in August to be the face of Le Champ Cosmetics, a local make-up brand, and won.

To this day, she believes the ‘luck of Tyra’ is following her. ‘I am so grateful for everything and this is just the beginning…my work is finally being noticed the way it should be.

Her words of encouragement for up-and-coming model hopefuls was: ‘Never give up on your dreams, have faith, and pray.’

Tyra Banks waltzing in as new 'Dancing with the Stars' host